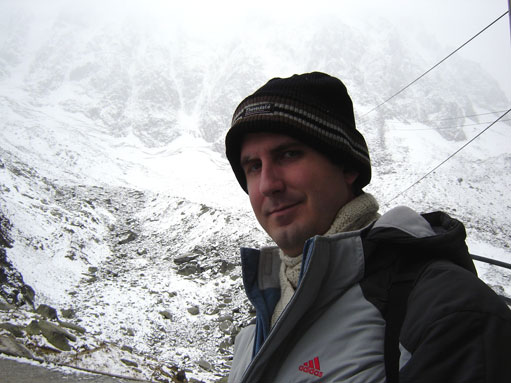 Attila Krasznahorkay has physics in his blood, the son of a nuclear physicist and a physics and math teacher. He was also introduced to the traveling life style at an early age, moving from his Hungarian homeland to Groningen in the Netherlands at eight years old when his father began work in the city’s university. His young, agile brain managed to pick up the Dutch language, but now, although he recalls the experience of being fluent at age nine, he struggles to think of words.

“Learning English was kind of necessary,” Attila notes, as he and his sister, Ilona, visited their father when he worked in laboratories abroad. When Attila was between the ages of 12 and 16, they made excursions to Munich and when he was 17, they had the opportunity to visit Osaka, Japan. “I really liked then how the cities look very orderly around there,” he says of Osaka.

But for Attila, home remained in Debrecen, Hungary. By his late teens, it was clear that Attila had a special knack for physics, and he pursued the subject at University of Debrecen. One of his professors in high energy physics, Dezső Horváth, suggested CERN’s summer program, and Attila snagged a place on OPAL in 2003. “I might have been the last summer student of that experiment,” he says.

“I was calculating the cross-section of jet productions in photon-photon collisions,” Attila adds, a project he enjoyed. “I liked the whole mentality of working here.”

That summer, Attila also first connected with Thorsten Wengler, his future PhD supervisor. “Through him, I got in contact with ATLAS,” says Attila. Thorsten suggested that he apply for position as a PhD student. Attila was accepted as a doctoral student with the University of Debrecen and returned to CERN from 2004 until 2007, working under Thorsten on ATLAS.

During his PhD, Attila was part of the ATLAS Trigger group. “I was mostly working with the Level 1 trigger hardware and also some other parts of the Muon Trigger.” In the winters, he learned to ski through lessons with the CERN ski club and help from more experienced friends.

“I’m pretty sure that they could still teach me quite a lot, but I’m at the level where I can quite safely come down on red slopes, let’s say. This is kind of the level where I feel I can go on my own as well.” Still a ski club member, he prefers to navigate the slopes with friends.

Because Thorsten isn’t a member of University of Debrecen, Dezső supervised Attila’s PhD work in Hungary, though he works on CMS. Attila spent the last two years of his studies at the university for the “official part” of his degree, coursework and thesis.

But while Attila had been working on the trigger at CERN, he got to know some of the folks in the New York University group. When he graduated last year, he sought a research position at NYU with the understanding that he would continue his work at CERN.

“There is a good chance that I could get involved with top physics again,” says Attila. He found top quark studies interesting during his PhD, and looks forward to the possibility that the NYU group may move in that direction. “At the same time, the group is kind of interested in some more exotic signatures, so-called lepton jets.”

Like many recent university graduates, he finds his college friends have already dispersed to other countries, and he has more friends around Geneva than Debrecen. “Back in the day when I was a doctoral student, I usually went back to Hungary like three times a year,” says Attila. He’s been three times since August, but he doesn’t expect the trend to continue. “My family doesn’t really like this habit of me, not home too often.”

Apart from his parents and sister in Hungary, Attila struggles to think of any one thing he misses about his homeland. Except perhaps the Magyar language: “Of course, it’s a nice change of pace; you can talk to everyone in your mother tongue.”