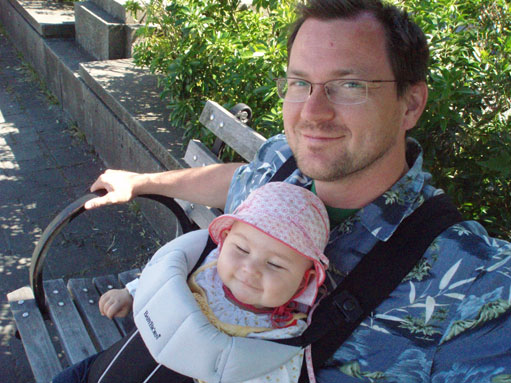 For Rolf Seuster, there’s no place like Victoria, Canada. Located on Vancouver Island, about 90 km south of this year’s Winter Olympics, Rolf believes it’s one of the nicest places in the country. “It’s the size of Switzerland, and there’s maybe half a million people on the whole island,” he says.

Mountains stand on the north side of the island, where he and his wife Miyuki Hatogai used to walk, and the highest is not unlike the mountains of the Jura. He moved there in 2004 for a post-doc with Victoria University. They stayed until March, 2009, when he took up a position with the Max Planck Institute of his homeland, stationed at CERN.

Rolf first began his work on ATLAS at University of Victoria, focused primarily on software for jets and missing transverse momentum. “It gave me an opportunity to come to CERN, closer to home,” he says. He grew up in Sauerland, Germany, and reflects on the name: “I guess it’s because it’s raining so much there, so people get a little bit sour.”

Nevertheless, Rolf enjoyed his childhood there, in a town of 30,000 people with forest not far away. At first, he stayed relatively close, attending RWTH Aachen University two hours away. He took up paragliding for a bit of adventure, trying it out on vacation in Australia and starting courses when he came back to Germany. They were interrupted when he began his PhD, but once Rolf had earned his degree, he finished his certification.

Unfortunately, that wasn’t enough to fly Japanese skies, when he went to Tsukuba in 2001, and the additional courses were in Japanese. Still, Rolf had plenty to enjoy during his year in Tsukuba, where he worked with the Belle group at KEK through the University of Hawaii. Studying the charm quark, Rolf also managed to charm his future wife.

“I really like Japanese food,” says Rolf. “And, it's healthy! Japanese restaurants are usually not expensive, if it's traditional food.” Road trips were a bit of an adventure, with signs marked only in kanji outside Tsukuba. “So, I usually oriented myself on the number of the streets. Bigger roads have clearly marked numbers,” he says. “Follow ‘408’ until you hit ‘354’, then follow it until you hit the sea.”

Rolf’s move to Hawaii put distance between him and Miyuki, but the tropical islands aren’t so far from Japan. The pair toured Mount Kilauea on one of her visits. It was too foggy for sweeping views of the volcano, and there was little lava activity, but they drove around it. “It was kind of spooky,” Rolf recalls, as a misjudged turn seemed to risk plunging into the crater. With lava flows a metre high, swallowing road signs, he says: “It’s really like being on the moon.”

Travel home for Rolf was a special challenge from Hawaii, literally the other side of the world from Germany. Aside from missing his family, he missed climates with noticeable seasons. “It’s summer all year round, and at some point, I just wanted to get out to see some snow,” he says, noting: “But then it was easy to go back and enjoy the sun again, and the beach.”

At the close of his first post-doc at the University of Hawaii, Rolf accepted a position with the University of Victoria. Vancouver Island isn’t as near to Japan as the Hawaiian Islands, so he asked Miyuki if she’d like to join him. “Luckily, she said yes,” says Rolf.

Half a year before their latest move, to Cessy, France, she gave birth to their first child, Sophie. “She’s really sunshine in our life,” says Rolf of his sixteen-month-old daughter.

Although Rolf would like to spend more time with Sophie, he has big shoes to fill at work: from March, he’ll be taking over from David Rousseau as Reconstruction Integration Group Leader. “I will do my very best to follow in his footsteps,” says Rolf. He’ll be leading efforts to ensure that reconstruction runs within time and memory limits and also try to speed up the software.

But Rolf’s favourite activities outside work involve Sophie: “Weekends I spend a bit time with her, and play with her toys sometimes, you know these Lego things.” He and Miyuki still enjoy hiking as well, especially with the Jura so near, but their plans are contingent on Sophie’s whims. “Sometimes we have great plans for the weekend, and Sophie just wants to sleep,” he says. “But when she smiles, it really pays for it.”