A new particle is born, but who is the father?

We have discovered a particle. It is perhaps the particle everybody has been looking for but, for now, let us just call it a particle possibly known as the Higgs.

I'm 28 years old, I have spent 4 of them in the ATLAS family and particle physics in general. That means this is the first particle discovery I have taken part in, and that is exciting even for the most level-headed of us.

Ironically the discovery made me think of how it must have been to discover the W and Z particles in UA2 and UA1 the same year I was born. Many of the slightly older members of ATLAS remember those days - I have only been told bed-time stories by my professors. What strikes me is the magnitude of these discoveries. Did they realise these were the long-sought Weak bosons predicted by the Standard Model? Did they admit to believe it and -- perhaps more interesting -- When? The titles of the published articles implies a level of caution:

But, they had just discovered the W boson! Better not be too brash too early, but the titles are vague (and notice the length of the author lists)!

So, now we discovered a particle as well. Is it a Higgs, and if so, which one? Currently I'd say that this question is a bit academic, we only have one really precise theory that has been tested many times over, and that theory usually comes with one specific Higgs boson. The rest must be manifestations of a hopeful dreamer. Now I like to indulge in daydreaming, in fact that is what I'm paid to do, so let us explore what else is out there and why it is very likely that what we found is a standard model Higgs.

SUSY, Technicolor and other Dream-states

Our theory-minded friends have had plenty of time to dream up beautiful alternatives to the Standard Model. Some hope to supplant the status quo with more mathematically appealing models unifying the particle world in Grand Unification Theories (GUT). Others are going for the deeper truths combining the microcosm of particles with gravity into what are affectionately called TOE(s) or Theories of Everything. Some of these theories lean against the Standard Model's solution for adding mass to otherwise mass-less particles. Others might use entirely different schemes. But common to even the more obvious alternatives is that they provide quantifiable(/falsifiable) predictions. One way to tell different models apart is by looking at how the models vary in their predictions. Common (I think) to all Higgs look-a-likes is that they are unstable and decay fast in various ways. We call the probability for a specific decay the decay-mode branching-ratio. For example, the results shown from ATLAS and CMS both rely on two main decay-modes: one in which the Higgs decays into two photons and another in which the Higgs decays to two Z bosons that each again decay to either two muons or two electrons. For the standard model and supersymmetry (SUSY) some of my friends and I published a small report with the predicted branching ratios. Let's compare:

For a few reasons, the figures are not directly comparable. The top one shows that SUSY, even constrained to the Minimal Supersymmetric Model (MSSM), which is a small subset of all possible ways to describe Supersymmetry, still has a lot of freedom in terms of free parameters. In the plot, one of them tan(beta) is fixed at 10, but this value could be something else in reality. The other difference is that MSSM actually requires FIVE Higgs particles to give mass to both "up" and "down" type quarks, as well as charged leptons. Luckily just the mass of one of the Higgs together with tan(beta) is enough to estimate the mass of the rest. What is relevant is that the branching ratios are different for the Standard Model Higgs and the SUSY Higgs. So, as we see our measured particle decay to two photons and two Zs, it is already in better agreement with the SM Higgs than the SUSY one in the figure.

What can happen, will happen, but how often?

Another way to measure the difference is simply to look at the overall production cross-section, or how many times per proton-proton collision do we find a Higgs particle with any decay-mode? In the presentations made by the two collaborations we see that the expected Standard Model Higgs cross-section is a bit less than what has been measured. But, there is nothing alarming here. The analyses are based on very few Higgs candidates, so we might just have been lucky to produce a bit more than expected statistically, and it might even out when more data is collected.

Is it a Higgs at all? One of the most fundamental observables that separates a Standard Model Higgs from other particles is its spin, or rather its lack of spin. Measuring the spin of the Higgs particle requires a lot of statistics, hundreds of times more collisions than we have collected so far. The result from that measurement will be well worth waiting for, as the Higgs particle is the only particle in the Standard Model with zero spin, something not observed before in any elementary particle. It might be too early to tell who the father is, but based on the baby's hair colour I'd not be too worried about the postman yet! 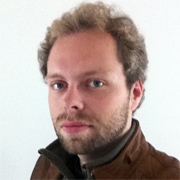