Is new physics running out of corners?

Friday was the last occasion for Moriond participants to see new results on specific physics topics since Saturday is reserved for summary talks. The topic was 'Beyond the Standard Model' -- a very large subject, which covers an incredible number of theoretical models, from Supersymmetry to Two-Higgs-Doublet Models, two of the most discussed topics of the day.

Each talk addressed more than one theoretical model, as the experiments prefer to focus on model-independent results. With each talk, however, the space left for new physics by latest measurements appeared smaller and smaller. In fact, Jean Iliopoulos highlighted in his summary talk that it is becoming harder to say "new physics must be around the corner," as we are "running out of corners!" So, I'll focus on a topic that appears less theoretical even if it is treated in close collaboration with theorists: searches for new physics with boosted topologies. This topic was presented by Patrizia Azzi on behalf of the ATLAS and CMS collaborations.

What is a boosted topology? The term, which derives from "Lorentz boost", is applied when a particle has energy equal to or above twice its mass. Due to their light masses, this is pretty much always the case for electrons and muons; they are considered "ultra-relativistic" and are not classified in this category. Rather, the term is reserved for much heavier particles, like W, Z or H bosons or top quarks - that is, particles that need much more energy to be boosted. These particles are unstable and are only observed by their decay products and, as a consequence of the boost, their decay products end up collimated in a single jet.

As an example of a boosted topology, consider a top quark decaying into a W boson and a b quark. If the W boson decays hadronically, it produces two light jets. So, in the non-boosted case, we could expect to reconstruct the top quark from three jets: two light jets and one b-jet. In the boosted case, however, we only observe one collimated jet containing, in its substructure, the two light jets and the b jet. The challenge is to identify such a jet and recognize its components.

Boosted topologies are also studied in searches for a Z' boson (a heavy Z boson predicted in some new theories) decaying into a top – anti-top pair. The top quarks are boosted for a Z' with mass above 1 TeV and, at the moment, Z' are excluded below 1.65 TeV (at 99% Confidence Level) depending on the model. Such searches represent possible new "corners" for finding new physics, especially as the LHC centre of mass energy increases (from 8 TeV to 13-14 TeV) in Run 2.

At these energies, boosted topologies will also be important for Higgs boson decays to b quarks or τ leptons.

Another very important topic -- concerning the Standard Model and the Higgs boson -- was brought up during the Young Scientist Forum. This session features PhD students, who are each given five minutes to present a topic and to answer one question, which is an excellent opportunity to present their work. And this topic, evidence of Higgs boson decays into τ leptons, was treated by two students: Nils Ruthmann for ATLAS and Riccardo Manzoni for CMS.

This is a major result. Until the end of 2013, the Higgs had been only observed decaying into bosons (γγ, ZZ and WW), although the Standard Model predicts that it should also decay into fermions (ττ, bb,…), decays in these channels are difficult to identify due to high background rates and final states that are more difficult to extract (jets versus leptons or photons). Both analyses used multivariate techniques to achieve the goal.

One of the more difficult challenges is to identify the tau leptons, which decay fully leptonically in 12% of the cases, leptonically and hadronically in 46% of the cases and fully hadronically in the rest (42%). The plot at the right illustrates the mass of tau leptons, as reconstructed in the hadronic decay mode. The final results present evidence of H → ττ at a significance of 4.1 σ for ATLAS and 3.2 σ for CMS. No new "corner" here, but more key support for the Standard Model, and a very important measurement. 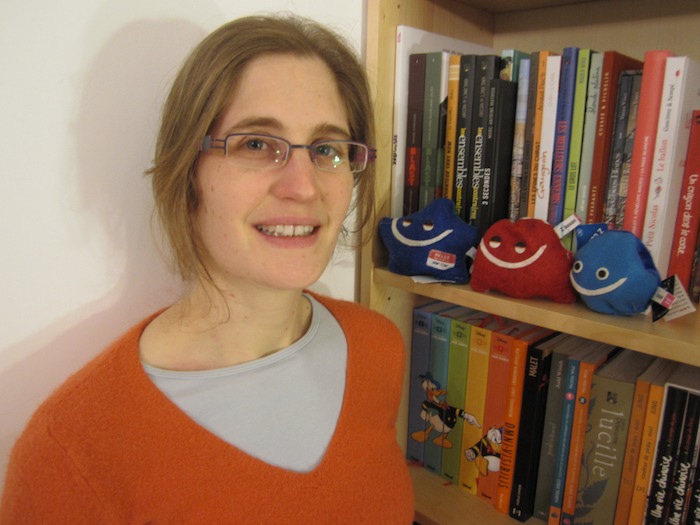 Eve Le Ménédeu is currently a postdoctoral physicist at IFAE (Barcelona), working on ttH, H → bb analysis and some b-tagging studies. She wrote her thesis at CEA-Saclay on muon spectrometer performances and studies of WZ dibosons. In her spare time, Eve plays the flute and guides underground visits of the ATLAS detector.