No matter how hard you try... Standard is standard

The past two days of the Recontres de Moriond 2014 Electroweak conference have been very intense with many new experimental results, many insightful theoretical talks and many lively discussions. Since the topics cover neutrino experiments, astrophysical observations and Standard Model precision measurements, giving a summary is not an easy task. But I will try.

The discovery of the long-sought Higgs boson, the last missing piece of the Standard Model of particle physics, was announced in July 2012 by both the ATLAS and CMS collaborations at CERN, and the Nobel prize was awarded in October 2013 to Peter Higgs and François Englert, for proposing the mechanism responsible for breaking the electroweak symmetry and giving mass to the Z and W bosons.

In less than two years, the experimental paradigm shifted from the search for a new particle to precise measurements of its properties. The newly discovered boson has to be perfectly characterized to make sure it is exactly the one predicted by the Standard Model and not an impostor. The first results published in 2012 by both ATLAS and CMS established the bosonic nature of the new particle as well as its couplings to the W and Z bosons and to photons. But this was not enough. Because the Higgs boson is not only responsible for the W and Z masses but also for all the Standard Model particle masses, we have to establish that it directly couples to fermions.

One of the important results of this conference is that both ATLAS and CMS showed very strong evidence of the Higgs boson decaying into b quarks and tau leptons (see Fig. 2). The official combination is expected to be published later this year. We can already see from the individual points that the final combination will provide required statistical significance to claim observation of the Higgs coupling to fermions, having a strength compatible with Standard Model predictions. Standard Model 1 : New Physics 0.

In addition, both ATLAS and CMS released a large number of measurements of the Higgs boson's production and decay rates over a significant number of final states during the past year, which were summarized today in clear and comprehensive talks. A difficult channel, the associated ttH production, is just at the edge of our sensitivity, but the ATLAS and CMS data clearly show a hint of this production mode. The combination of all these measurements allow one to probe the deviation of the entire set of Higgs coupling constants from the Standard Model. And no matter how hard you try, everything beautifully aligns to 1 (as shown on Fig. 3). Standard Model 2 : New Physics 0.

One of the last highlights of the conference was the measurement of the Higgs boson width. The "width" of a particle depends on its lifetime, or in other words, its decay probability. For the 126 GeV Higgs boson, the Standard Model predicted width is 4 MeV. The previously established limit, obtained from the width of the reconstructed mass peak, could only constrain the Higgs boson width to values smaller than 3.4 GeV. The analysis presented by CMS today uses a new method. (I won't enter into technical details here but the idea is that the production rate of the Higgs boson decaying into ZZ* at high energy depends on the Higgs boson width.) This new measurement shows a remarkable sensitivity and constrains the Higgs boson width to be below 17 MeV, more than two orders of magnitude better than the previous limits! Standard Model 2.5 : New Physics 0. Only half a point here, as the Higgs boson is still allowed to decay into invisible new particles, less than 50% of the time, but this still leaves enough room for new physics to sneak in. It maybe the only place, actually.

Could this be the end for new physics models? It's becoming a serious question for theorists since no hint in deviation from the Standard Model predictions has been found yet despite the huge amount of data analyzed so far. From all that I've heard from theorists today, here are a few phrases that grabbed my attention:

So, do we really need more than the Standard Model? What are the questions that are not answered so far? There seem to be only a handful of them remaining: neutrino oscillations (or mass), baryon asymmetry, dark matter, dark energy and inflation.

The inflation problem is actually in the spotlight right now. A "guest" talk was added at the last minute to our conference agenda, to present the recent observation published by the BICEP-2 experiment at the South Pole. The measurement of the polarisation of the cosmic microwave background shows a signal that could (under minimal assumptions) very well be compatible with the inflation model (which is needed to expand the universe at a very high rate in its early stage). This polarisation signal could also be the experimental proof of the gravitational waves, the last of Einstein's predictions that remain to be validated. It also looks like one of the most simplistic inflation models is sufficient to explain the BICEP-2 observations.

The same “minimalistic” trend is being considered in our field. For example, one of the new models presented by Marco Drewes proposes the addition of only three right-handed neutrinos to the Standard Model to solve all the remaining issues, in particular dark matter, baryon asymmetry and neutrino masses.

An interesting suggestion was made today towards a minimalistic model choice. Besides the obvious need to accurately describe all the experimental results gathered so far in particle physics, its equations must fit on a medium size T-shirt, such that physicists can wear. And today, it seems that only the Standard Model can successfully fulfill both criteria. 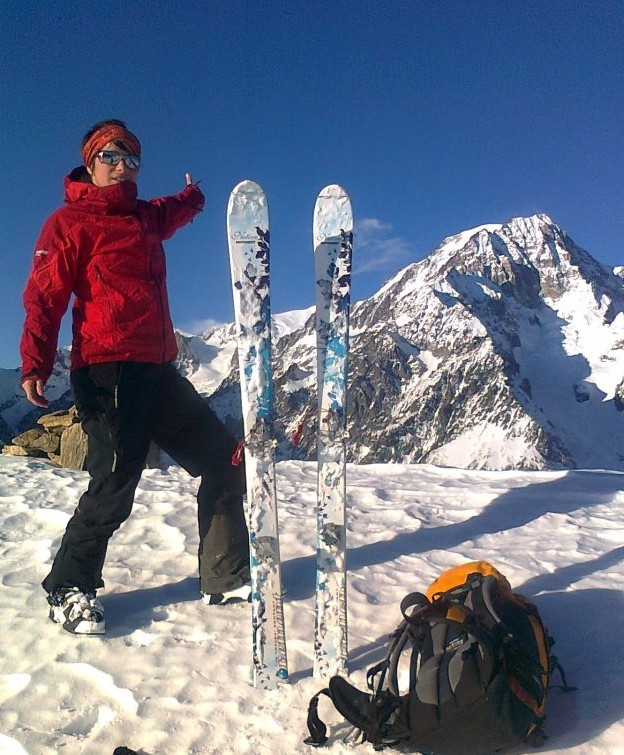 Jessica Levêque is a French researcher at CNRS. Her main activities are measurement of the Higgs boson properties in the di-photon channel, improvement of the photon and electron performance, data quality monitoring and the tracker upgrade for LHC phase II in 2022. She also devotes part of her time on outreach activities. And when she’s not at work, she climbs mountains.