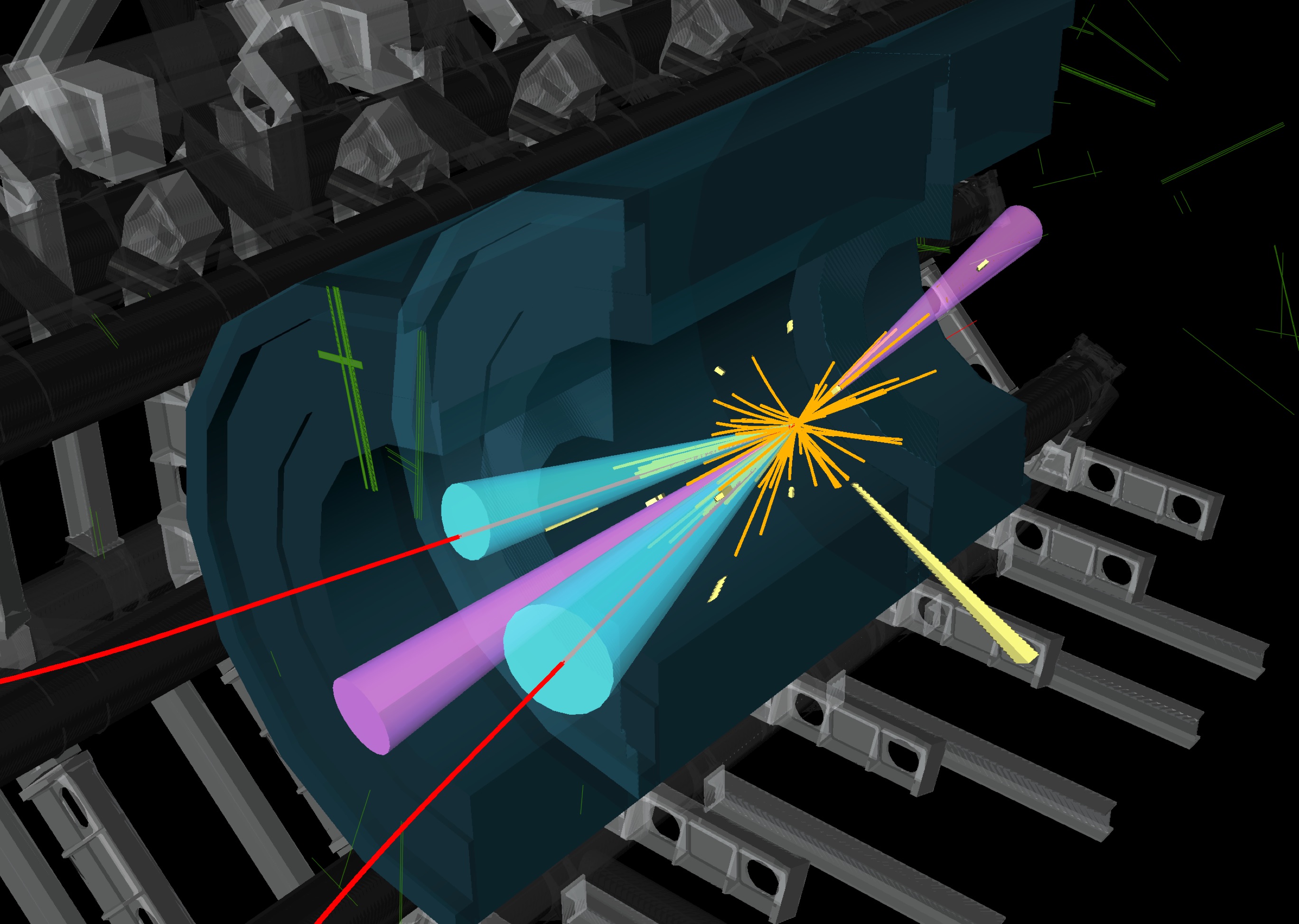 According to the Standard Model of particle physics, more than half of the Higgs bosons produced at the LHC decay to a pair of bottom (b) quarks. Despite that, measuring these decays was a major challenge that experimental physicists spent many years chasing. It was finally accomplished in the summer of 2018, when the ATLAS Collaboration reported the observation of Higgs bosons decaying to b-quark pairs (H→bb). The trick was to reduce the overwhelming background from the strong-interaction production of b-quark pairs by requiring the Higgs boson to be produced in association with a leptonically-decaying W or Z boson.

Since then, measurements with more data have provided greater precision and deeper probes of this important interaction. Recent results from the ATLAS Collaboration, released for the Higgs 2020 conference, focus on different production modes of the Higgs boson decaying into b-quarks. These new analyses capitalise on the power of machine learning to better discriminate this particular process from other proton collision events.

The Higgs boson can be produced through vector boson fusion (VBF), where quarks from colliding LHC protons radiate W or Z bosons, which in turn annihilate (or “fuse”) to create a Higgs boson. VBF events have a distinctive signature in the ATLAS experiment, resulting in high-energy particle jets in the forward regions of the detector and a lack of activity in the central region.

The ATLAS Collaboration has released two new results for VBF production of Higgs bosons that decay into two b-quarks. The results use advanced methods to enhance the Higgs boson signal relative to the background. In the first case, as the fusion of two W bosons can result in the creation of photons, physicists looked for proton collision events with a photon present in addition to the VBF Higgs-boson signal. As Z bosons do not radiate photons, this measurement is uniquely sensitive to the difference between W-boson fusion and Z-boson fusion.

For their second VBF analysis, ATLAS physicists used a machine-learning technique called an adversarial neural network (ANN) to gain the advantage over the main source of background (events with b-quarks from sources other than Higgs bosons). The Higgs boson signal strength – defined as the ratio of the measured rate to the Standard Model prediction – could be determined by examining the invariant mass of the two b-quarks in different bins of the neural network output.

These new studies of the H→bb decay focus on different Higgs-boson production modes: via vector boson fusion (VBF) and in association with a pair of top quarks (ttH).

Most uncommon of the common

ATLAS physicists also tried their hand at uncommon searches. The associated production of the Higgs boson with a pair of top quarks (ttH) is the rarest Higgs production mode observed so far, a hundred times smaller than the dominant Higgs boson production through the fusion of two gluons. It gives direct access to the coupling between the Higgs boson and the top quark.

A new result from the ATLAS Collaboration studies proton collision events in which Higgs bosons decay to a pair of b-quarks, and top-quark pairs decay into a final state with one or two leptons and particle jets. Again here, the biggest challenge is the separation of the signal from the background events. ATLAS researchers used multivariate analysis techniques, including a Deep Neural Network, in both the “resolved regime” – where the Higgs boson momentum is small and the particle jets arising from the two b-quarks are distinct from each other – and in the “boosted regime” – where the Higgs boson momentum is large and the two b-quark jets merge together.

The combination of these two regimes allowed ATLAS physicists to probe – for the first time – the ttH(bb) signal strength as a function of the Higgs boson transverse momentum. The measurements were performed in mutually-exclusive regions called “Simplified Template Cross Section (STXS) bins”. They allow researchers to constrain physics beyond the Standard Model and obtain sensitivity to the Higgs boson self-coupling.

These new results join a recent study of specific high-momentum (“boosted”) Higgs boson production in association with a leptonically-decaying W or Z boson. Here the Higgs boson decays into two close-by b-quarks, reconstructed as a single large-radius hadronic jet with a transverse momentum greater than 250 GeV. Effects beyond the Standard Model could modify the production rate of Higgs bosons at high momentum. The measured signal strength was found to be 0.72 ± 0.38, in agreement with the Standard Model prediction.

ATLAS researchers will continue to pursue Higgs boson studies in its dominant decay mode. These are particularly relevant in kinematic regions where Higgs boson production is limited by the available data statistics, such as at high momentum. By combining and comparing these new results with earlier results, the interaction of the Higgs boson with the other elementary particles is being elucidated with ever-increasing precision.