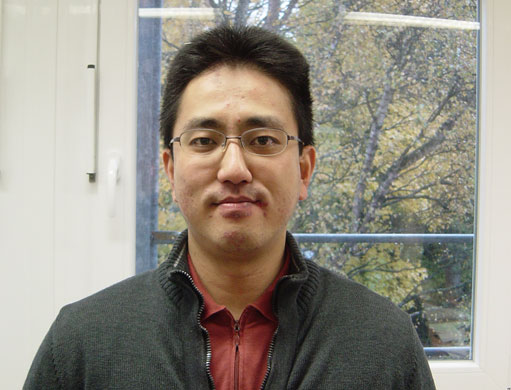 There are many paths into science and one that might have played a key role for Takanori Kono could be LEGO bricks. Maybe it is the segmented approach learned from playing with those bricks that helped him later on tackle computer programming. It is easier to break down any problem into smaller chunks, seeing how it is put together as though it were made from basic building blocks.

“As a kid I played a lot with Lego. I remember that I did recreate my whole neighbourhood with LEGO and with practice, I could achieve realism with increasing complexity. I added second and third floors, and backyards to my buildings.” he recalls.

Due to his father's business, the family left Japan and lived in California when Takanori was between six and ten years old. It was during that time, he learned origami. “With LEGO, you start with only bricks and an assembling plate, with origami you start with a piece of paper”, Takanori explains. The goal of origami is to transform a flat sheet of material into a finished sculpture through folding and sculpting techniques. Traditional Japanese origami has been practiced since the Edo era between 1603 and 1867. Today, more and more teachers have been developing ways to use origami to teach concepts in math, chemistry, physics and architecture.

At the age of seven, his father taught him shogi, a kind of Japanese chess. He became so good at it, that he won a prize at the city tournament for elementary school students two years in a row. “But both were bronze medals unfortunately,” he says modestly.

Since shogi is rather limited, he learned to play GO, a game he still plays often today – but mostly against the computer.

When Takanori started his university studies in Tokyo in 1995, he did not have physics in mind. Japanese universities work differently: students just decide about their overall subject, like natural sciences or law or medicine, and then make up their mind during their first years.

So for Takanori it was natural sciences, which included chemistry, mathematics as well as physics. In 1997, he finally chose fundamental physics. “Probably, the reason I decided to go into physics research and especially particle physics, is that I was so impressed by the theory of relativity and quantum mechanics when I was an undergraduate,” Takanori recalls. “Especially, if you learn relativity, the formulation of the theory looks just correct but the consequence of it is contradictory to our common sense. Although things look weird sometimes, we are not talking about science-fiction but the real world and it still looks like there is more fundamental truth out there.”

After learning more about modern experimental particle physics, Takanori joined the ZEUS experiment. “I liked the idea of probing the structure of the proton with a large electron microscope, which is what was done at HERA.” So this is where he did his PhD work with the University of Tokyo. After graduation in 2004, he joined the ATLAS experiment, first with the University of Oxford group where he worked on the construction of the SCT and its alignment system and then as a CERN fellow.

“The construction of the SCT was finished by summer 2005, and we had to wait for a few months to install the detector into ATLAS. So I started working in the trigger group with CERN” he explains and goes on: “In 2006, we were just starting the integration of various components and I was actually the first one to run a High Level Trigger (HLT) [algorithm] online at point 1. Now we have hundreds of selection algorithms [running] together for data-taking. I was involved heavily during this process and it was really nice to see the progress and feel involved.”

In 2009, Takanori left CERN and moved to Hamburg for his current post-doc position. ”As the real experiment seemed imminent, I thought moving away from CERN and spending less time on operational work and more on data analysis would be nice. However, I'm still involved quite a lot on the trigger menu business” he admits but also adds that he likes living in big cities. So now he commutes between Hamburg and Geneva frequently, as every second month he is back at CERN, taking shifts and working on the trigger menu.

After just a year in Hamburg, he is still exploring the city,enjoying the sightseeing. For his future, Takanori would like to stay in Europe, maybe in Hamburg...