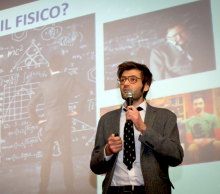 Luigi joined the ATLAS collaboration in 2015 when starting his PhD with the University of Oxford. He has worked on the measurement of the Higgs boson total width using the off-shell production of the Higgs boson. He was also involved in several studies of muon-momentum performance, and has served as an Inner Detector shifter and shift leader in the ATLAS Control Room. He was the last shift leader of the ATLAS physics program in Run 2. At the University of Oxford, he coordinates two international summer student programs for undergraduate students.
He believes outreach is part of a scientist's

In 2019, I joined the ATLAS Early Career Scientist Board (ECSB): a special advisory group dedicated to assisting the ATLAS Collaboration in building an environment where the full scientific potential of scientists at the start of their career can be realised. The board organises several activities for the ATLAS community (you may have seen all of our summer activities described in this blog). I was actively involved in the winter activities. They were all fantastic experiences to improve social relationships in a 5000-people collaboration.

Serving up new winter recipes with the ATLA...