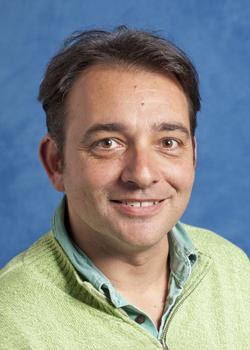 Mario Campanelli graduated in Rome in 1995, with a master thesis on a calorimeter for the L3 experiment. After that he moved to CERN to start a PhD, working for ETH Zurich on the analysis of WW production. After obtaining his PhD in 1998, he spent three years on the ICARUS neutrino detector, and then moved to Geneva University to work on the CDF collider detector at Fermilab, near Chicago. In 2007 he joined the faculty of University College London, to work on the ATLAS experiment, where he studies hadronic jets, from the "trigger" system that selects them, to studies of their production and

The third day of the Moriond QCD conference was dedicated to quantum chromodynamics (QCD), the theory that describes strong interactions itself.

Here we are at the second blog from the Moriond QCD conference and, as promised, I will discuss a bit of physics.

First impressions from the Moriond conference

My name is Mario Campanelli, and I am a physicist who has been working for about 9 years on the ATLAS experiment, as part of the academic staff of University College London. This is the first time I write a blog, but I do have quite an experience in communicating science to the public, having guided visitors around CERN since I started working there as a PhD student 20 years ago, and also having written two books for the general public. Since Saturday I have been in La Thuile, a mountain resort in the Italian Alps, for the Rencontres de Moriond - arguably the most important winter conference in particle physics.

First impressions from the Moriond conferen...