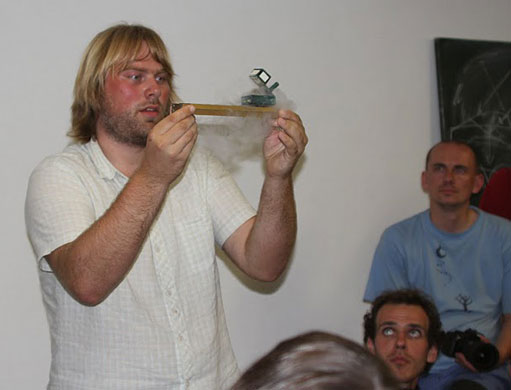 There is usually a defining moment, or event, that leads a person to science. For 10 year old Martin Rybar, it was the moment when he found the chemistry laboratory kit from his uncle in his parents' house. Curiosity has always been the main driving force in science – and Martin was no exception.

“There was no chemistry book or any instruction manual. So my first experiment was to mix everything together and see what happens.” he recalls smiling “Luckily there were no acid components included, so there was no danger that I could create some explosives and destroy the house.”

Driven to explore and discover, Martin installed his little laboratory down in the cellar, where he spent hours of experimenting – first just by himself and later, with a schoolmate. “My parents did not really understand what was going on. But they supported me. Luckily my mother worked as a nurse, so when I was running out of ingredients, she got me some from the hospital.” The chemistry experiments also had an impact on his school career as he could show some of his solutions in class.

Martin was interested in “the whole science” - biology, mathematics as well as physics. It was during grammar school that physics took more and more the priority. “Our physics teacher stayed in touch with Charles University where he studied physics. He made us participate in physics competition using tests and problems to be solved [that] he received every month from his university,” Martin remembers.

Another impact on his raising interest in physics came from a summer school where he participated in an astronomy class for two weeks during the summer. They had star gazing lessons in the observatory of Upice.

As it is his credo that scientists should aim not only to explore, but also to be recruiters and trainers, Martin decided to become an instructor at this summer school. “In 2006, I started to organise the Astronomická Expedice Summer School and since 2009 I am the main organiser. I manage different lessons and lead groups of people.” To create science addicts who maybe one day will decide to pursue a career in science like him, and maybe contribute to some discovery.

When he started his studies at Charles University in Prague, he first applied for astronomy. But during the first two years, while he studied general physics, he found out that the particle physics department was much better suited than astronomy when it came to finding a subject for his thesis. And that's where he chose to work on "Jets in pp and PbPb collisions at LHC".

As modules of the Semiconductor Tracker were tested at Charles University, Martin was trained as a shifter on the SCT detector. “I started to work on trigger for heavy-ion collisions, because it was an uncovered area in the Heavy Ion program,” he explains “[CERN] is an amazing place for everything.”

And this is now truer than ever. Martin just started his PhD this year at Charles University. Unlike most students on ATLAS, he did not have to wait long for his data. Not only that, but he stumble over the most interesting effect observed so far! “Usually I travel to CERN to do shifts (on SCT sub-detector) but this time I came to participate on analysis of the first data. And then we had a stable beam for one week and collected so much data. I did not expect this so fast. It is just perfect that this happens at the beginning of my thesis,” he says enthusiastically “Publishing the paper was so exciting. Everyday meetings with Fabiola and in the restaurant, we were very silent, as we could not mention this event in public.” He grins.

In his spare time, he likes to do downhill skiing and hiking. “And I like watching science fiction movies, everything that is playing in the future with aliens. I love to watch Stargate SG1 and Starwars.” Meanwhile, his interest in astronomy remained intact: “I have still my telescope, but the air around Prague is so light-polluted, that star gazing is not possible. And for bringing it to Geneva, it is too heavy.” But luckily there are these two weeks at the Astronomická Expedice Summer School…