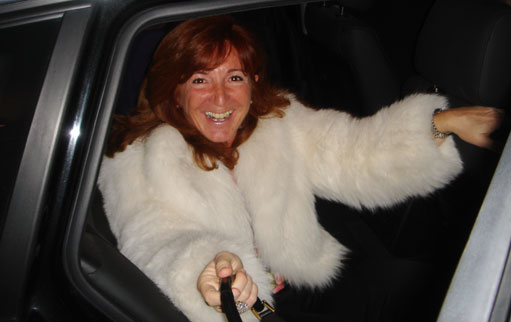 Particle physics is an endurance sport. The building of ATLAS took nearly two decades of design and construction. In the early autumn, the blast from the first colliding particles will mark the start of a multi-year race to discover new physics. This rhythm of preparation and performance is one that Adele Rimoldi knows well.

At 54 years old, in 2006, Adele decided she would run the New York Marathon. She had completed half-marathons before, in Milan, Geneva, and Pavia, but this was her first attempt at the full 42.2 kilometres. Preparing, she browsed through training schemes posted on the Web. She advises: “Training for a marathon, you should run more than 600 kilometres over two to three months.”

Adele is not alone in her enjoyment of endurance sports, as her husband, Bruno, and eldest son, Tommaso (29) joined her in the New York Marathon. Her younger son, Luca (27) would have run with the family, but he was busy finishing his thesis in Edinburgh.

Adele met Bruno at the University of Pavia, during their first physics degrees. At the time, they only shared skiing among their athletic interests, but since then, they have branched out to rock climbing and multi-day hikes or bicycle trips. “Everything connected with the mountains is good with me,” says Adele.

She is quick to downplay the peril associated with these activities. “They are not dangerous, if you know the technique, if you know what is the weather and the conditions.” Again, according to Adele, training and preparation are the keys to safety in the mountains, along with a guide on rock climbing expeditions.

Last year, Adele combined her marathon running and mountaineering, participating in the Gran Trail Valdigne, climbing a total of 2400 vertical metres during the 45-kilometre race. She completed it in just under 11.5 hours, battling through heavy rain, and she was surprised to find that she won a grolla, a serving bowl for a traditional Italian mulled wine. She was the only woman over 50 years of age to finish. In spite of the cold, damp, and mud of last year’s race, she plans to run the Gran Trail Valdigne again.

Adele’s connection with the University of Pavia is also for the long-haul, from her first years at university onward. “It is one of the most famous and old universities in my country,” she notes, and more importantly, it was involved in the nuclear and particle physics that she wanted to study.

Her participation in ATLAS has been similarly persistent. Along with her group in the Nuclear and Particle Physics Department, she has been involved with the MDT chambers of the ATLAS muon system for 19 years, from the design stage. Working with other Italian institutes, they provided many of the barrel MDT chambers. “We built, we tested, we delivered in time,” she says.

In addition to her experience building the MDT chambers, she coded for other muon chambers: RPC, TGC and CSC. This, coupled with her early involvement in the global simulation system, made her a natural choice for the muon spectrometer’s Simulation Coordinator. She held this position from 1999 until 2003.

In 2003, she took on simulation coordination for all of ATLAS. She considers the best and worst parts of the job to be one and the same: working with such a range of people scattered in many countries. But even when the going is tough, Adele can find the path forward and continue down it.