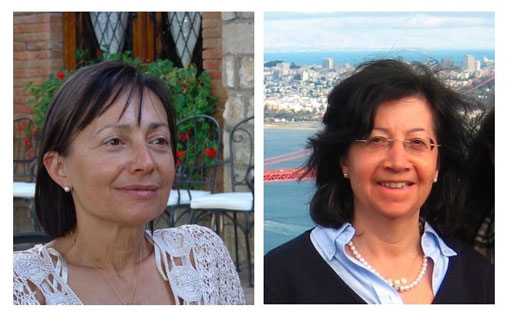 Physics, as a discipline, isn’t short of references to symmetry and balance. The tale of Anna and Lucia Di Ciaccio though is almost poetic in the way it weaves. They are non-identical twins, and interviewing them is both slightly surreal and a complete delight.

“We liked the same dresses, so it’s probably not surprising that we liked the same subjects!” volunteers the more forthright Anna immediately, as a start to their story. Indeed, they studied the same subjects all the way through school and university, and even had to flip a coin when it came to writing their Masters theses: “The professor was a really special teacher for us,” Anna explains. “He brought a lot of enthusiasm to his work.” Lucia’s take on the situation is slightly different, to the surprise of her twin: “Actually, it wasn’t the professor himself for me, it was the subject of the thesis.”

The coin that time went in Lucia’s favour, but in so doing, it paved the way for Anna’s first contact with CERN – she came here to do a thesis on the UA1 experiment with Carlo Rubbia.

Initially, the twins wanted to go into theoretical physics, but because of the lack of jobs, they pursued experimental physics instead. Despite their identical career choices, the ATLAS experiment is the first experiment that they have both worked on – Anna having now been on board for 18 years, and Lucia for nine. “There are now so few high energy experiments with colliders that we’ve somehow converged into the same one,” says Anna, “although we’re on different projects.”

As they progressed through their educations, narrowing their focus first to science, and eventually to experimental particle physics, Anna and Lucia didn’t really discuss their decisions along the way. “OK, perhaps a little bit,” concedes Anna. “Sometimes we had maybe an hour of discussion together.”

“It was natural to us to do things in an independent way,” adds Lucia. “You might imagine that studying, we could have sat together and looked at the book together, but we were always in two different rooms, with two different books, and working independently. We didn’t consider working together as an option.”

This independence of character is perhaps the reason why neither would have a problem working on competing experiments, although the situation hasn’t arisen for them so far. “All the time from primary school to university, we were confronting each other,” laughs Lucia, “so for us, competition was always part of the game.”

“Competition, you feel mainly from others – the ones who compare you,” adds Anna. “But we were used to that.” Luckily, the achievements of each sister tended to average out during their education, meaning that neither felt too much in the shadow of the other. In fact, they found their competition to be healthy and encouraging, and from it grew a different, fiercer, kind of independence: not caring about the judgement of other people. Never really being alone in the world seems to have given the twins a confidence that most other people lack.

The non-identical nature of their looks extends to their personalities. “We’re kind of really…” begins Anna. “Complementary” Lucia finishes for her. “In a twin couple there is always,” begins Anna again. “A leading person,” Lucia chimes in, “And my sister was always leading, and I was always accepting. She decided on the unimportant things – where we go on holidays, everyday life. When there were important things, it was always me.”

Their different characters can also be inferred from the way that they paint, although they have very little time for that hobby these days. “My sister, she’s more analytical – she goes into tiny details when she paints,” explains Anna, “And instead I like to make an overall summary.” These tendencies can also be seen in their individual physics specialities: Lucia worked in the realm of e+e- physics, which produces clean events and requires detailed, systematic treatment; Anna specialises in pp physics, for which, she says, “you need more fantasy to be able to dig out the event.”

Over the last few years, Anna participated in the construction of the RPCs in the muon system, and Lucia was involved in the building of the liquid argon electromagnetic calorimeter. Now that their attentions have turned to the first physics that can be done with the detector, “we’re somehow discussing the same things again,” says Anna. She is leading the Roma2 group and is the deputy-chair of the ATLAS Speakers Committee while Lucia is leading the LAPP group and the convenor of the Standard Model physics group.

Outside of physics, Anna and Lucia speak a lot on the phone, from their respective homes in Italy and France. “Too much,” laughs Anna. “We speak more to each other than we do to our husbands,” smiles Lucia. “My husband says if he wants to know what’s going on in my life, he has to listen in to a phonecall with her!”

Both sisters are quick to play down the eerie symmetry evident in the fact that they have both ended up married to German physicists. “It’s not surprising,” says Anna. “Only another physicist can understand why you are so dedicated – why you work at weekends and travel a lot.” But add in the detail that they each have one daughter (two years different in age), and things get spookier.

“I’m just the opposite,” counters Lucia. “My daughter is more forward somehow. You marry and you get complementary. Our husbands complement us and so our daughters.”

In spite of a declared complementary personality, their similar enthusiasm in talking about physics and personal life tells that they are indeed twins!