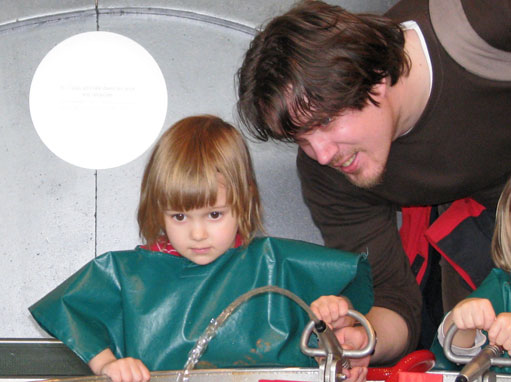 How does Borut Kersevan spend his free time? “What free time? is the answer,” he says with a wry grin. But what little he has, he likes to spend on family, travel, and good conversation.

With aliases such as “The Unpronounceable”, “Bert”, “Brute”, and once, “Borat”, he and his wife Alexandra chose an internationally easy-to-pronounce name for their daughter: Ana. Borut acknowledges that, at four years old: “Ana has to grow up a bit more before we can go back-packing.”

For now, the family travels seem to specialise in the zoos of Europe. “Last year, we went to Paris, which also has a zoo,” Borut recounts. At the Cité des Sciences et de l'Industrie à Paris, they brought Ana to play in the hands-on areas for children.

“Now you’re going to be a scientist today, like Daddy,” Alexandra told young Ana. They spent the afternoon building with large blocks and navigating mazes, and they left a bit damp after experimenting on giant sink with turning water-wheels.

Borut believes this has shaped Ana’s current perspective on CERN: “I think she’s convinced that I look into curved mirrors and play with water a lot.” When he brings his real work home, Ana is happy to climb into his chair and help with the typing.

As Physics MC Production Coordinator, Borut is “sitting on the fence between ATLAS physics and ATLAS computing.” He helps facilitate work across a boundary that he sees as artificial: between physics analysis and Grid computing.

“The physics groups perceive all this as a service and don’t really realize that the guys who are actually doing it are probably sitting in the office next door,” he says. “We are not Microsoft.”

Borut is new to the position, just starting last year, but he also served as Monte Carlo convenor from 2004 to 2007. He is a professor at the University of Ljubljana, in the capital of Slovenia, where he also studied as an undergraduate.

Coming to CERN for the first time in 1997 to start his PhD on DELPHI, he was surprised at the utilitarian style of the buildings when he’d imagined “Hollywood-style” glamour from a world-class particle physics facility. That and the non sequitur building-number system. “I’m still sort of harbouring the idea that if you connect all the dots in the correct sequence, you get a nice picture or the answer to the end of the universe,” he jokes.

He spent a year here as a research fellow from 2001 to 2002, a new recruit on the ATLAS project. His wife, Alexandra, took a year’s sabbatical from her studies to be a lawyer in order to join him. Now, they are based in Ljubljana, with Borut spending a week at CERN each month, sharing a house with his two PhD students in St. Genis.

While Borut enjoys an evening beer with his colleagues at CERN, he finds that research groups tend to be a bit isolated from one another socially. In Ljubljana, he and Alexandra have friends and acquaintances from various fields such as law, economics, and history, and he enjoys lively discussions from their different perspectives over the state of the world. “It mostly starts with an innocent topic – CERN included – followed by a ‘slight’ clash of opinions and there’s a huge debate for hours,” he describes.

One of his other favourite parts of Ljubljana is the annual jazz festival, taking place this year between June 29th and July 4th. While we may not automatically connect jazz with Slovenia, greats such as Miles Davis and Dizzy Gillespie have played at this 50-year tradition.

As jazz thrives on experiment, it doesn’t make for the easiest listening. But in conversation, Borut likes a good-natured argument, and for his work, he has placed himself between physics and computing, where he takes flak from both sides when things don’t go to plan. He’s certainly not a man who prefers the easy path.