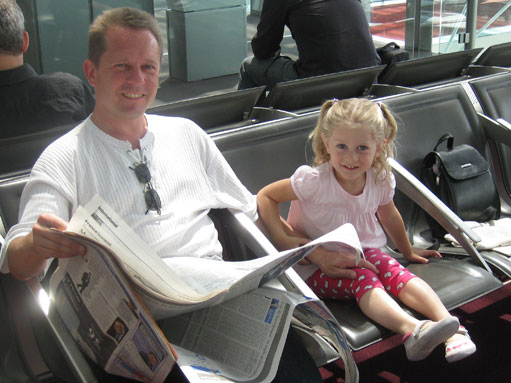 Unlike most of us at CERN, Hans Peter Beck is a Swiss native. He grew up in places like Weggis, on the shore of Lake Lucerne; Wolfenschiessen, in the mountainous interior of Switzerland; Dietikon, a suburb of Zürich, and finally in Zürich itself. He completed his matura – the Swiss secondary education – at the Mathematical Natural Science Gymnasium, Rämibühl, Zürich. Although he received better marks in chemistry at the time, physics held a much stronger attraction because it delves into matter at its most basic.

The German “gymnasium” refers to a school, the last stop before university, but Hans Peter was also an accomplished gymnast during those years, competing at Swiss regional events around the country. His specialty was a front flip; he was able to complete two revolutions from the floor.

He also enjoyed diving, from platforms as high as 10 metres. His preference was the 3-metre springboard, however. “If you go in not quite right, you’re not too badly hurt. You can freely express yourself,” he says. “Two and a half somersaults was a nice one.”

Competitions ended for Hans Peter when he went to the University of Zürich, where he met his wife, Zdena. A native of Slovakia, she was studying mathematics in Zürich, and they met in a math class. “As soon as you get a family, and develop a career in physics, your free time gets to be a sparse resource,” Hans Peter notes.

Their two eldest daughters, Nastassja and Vanessa, were born during their studies. “It was kind of tough, yes, but we managed,” he says, for both he and Zdena finished their Masters degrees. Hans Peter continued to his PhD, moving the young family to Hamburg as he worked with DESY through the University of Zürich. He cut his teeth on trigger design in the H1 experiment while Zdena made their two daughters her priority.

Finishing his doctorate in 1996, Hans Peter spent a bit less than a year working as a consultant and engineer for industry in Zürich before taking up a position with the University of Bern. “Doing research in fundamental physics, and setting up an experiment like ATLAS from very early on, was infinitely more compelling,” he says.

Working on the ATLAS trigger and data acquisition system (TDAQ), he was influential in the design and implementation of the system for event data flow – from the readout through the high-level trigger system, to event building and data storage. He currently chairs the ATLAS TDAQ institutional board, comprising 73 ATLAS institutions.

“I’ve become deputy group leader of the BAT, short for the Bern ATLAS Team, in a way since very early on. Even now I have my boss in Bern, full professor; he’s active in many areas,” he says. So the day-to-day running of the BAT falls to Hans Peter. Eleven researchers, from Masters students to senior post-docs, work in his team.

Lecturing duties come along with Hans Peter’s title of Privatdozent, the level preceding that of professor. “Teaching is fun, but it’s a lot of work for all the preparations,” he says. He teaches undergraduate and graduate level courses – for physicists, mathematicians, and chemists, but also for other fields. “Right now I’m teaching physics for medical students,” he says, “so I have to bring all the examples I do out of some medical field.”

Living in Thoiry means that Hans Peter must do a lot of commuting during the periods when he teaches at the University of Bern. As the trains cost him an extra hour each direction, he drives – a two hour trip from home to Bern. “On the motorcycle, it’s less,” he remarks. With the windscreen at the front and his protective clothing, he doesn’t mind the ride even in less-than-ideal weather conditions.

Geneva is a good location for Zdena’s talents as well since she is fluent in seven languages. She worked with the International Organisation of Migration and is now seeking a post with the World Health Organisation. In between, she wanted another child to raise – Tabéa, 16 years younger than her eldest sister.

Hans Peter and Zdena have long taken advantage of their location to show Nastassja and Vanessa major cities of Europe, in Slovakia, the Czech Republic, Austria, Hungary, Germany, Sweden, and all over Switzerland and France. Tabéa, who turned four in July, will soon be old enough to start appreciating such tours.

For now, Eurodisney Paris is enough to amaze her. “It was her first time in a plane in her life,” says Hans Peter. She insisted, “I cannot fly!” but her father explained that the soaring would not be under her own power.

Hans Peter believes that a New Year’s spent in New York City is the favourite trip for his wife and eldest daughters, but he withholds any judgment of his own. “I like many places,” he says. “I haven’t seen all of them yet, so I cannot decide which one was the favourite one, but maybe my trip to Rapa Nui, while hopping over after a week’s conference in Chile, was kind of a very special trip.”