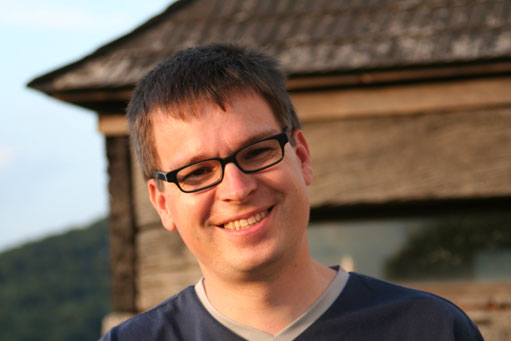 For Jochen Schieck, monthly trips to CERN – often spanning just one day – suit him well. The rest of the time he’s based at the Max Planck Institute (MPI) of Physics in Munich.

“It’s an efficient day,” he says of his flying visits. “You take the first plane at seven in the morning, you’re here for the meeting at nine, and you take the last plane back in the evening.”

The members of Jochen’s working group – Inner Detector (ID) alignment – are dotted around the globe, rather than on-site at CERN, so his being based elsewhere has little effect on his tasks as coordinator of the group. They stay in touch over the Internet, making use of hypernews, email, and weekly teleconferences, “and then once every three or four months, we try to all come here and discuss things around a table,” he says.

Although he enjoyed spending time in Geneva working on the OPAL experiment as a diploma and PhD student with Heidelberg University, Jochen is a big “culture vulture”, frequenting operas, concerts, plays and performances. “It’s my favourite thing to do in my spare time,” he says, “and for this, Munich is much better than Geneva.”

Looking back, he remembers clearly the performance that first turned him on to opera, aged 15: “It was exactly a couple of days after Chernobyl happened, and I walked through the rain to the opera house,” he recalls, joking: “Maybe the radioactive fall-out changed me.”

The opera was Strauss’s Salome. “It was already 100 years old but it was very loud and very emotional music and it just got me.”

Since then, Jochen has been a committed concertgoer, attending at least one per week. In the week preceding this interview, he saw shows on the Monday, Thursday, Friday, Saturday, and Sunday. “But that was an exception,” he smiles. In Germany, a season ticket-holder can easily see a concert for under 10 Euros – less than it costs to see a film – but the time constraints of working on ATLAS usually prevent Jochen from doing this on week nights.

His favourite composers change and vary with time, he says. His Wagner phase of 10 or 15 years ago has subsided, “somehow got lost”, and where once he “could not have the feeling for Mozart”, performances of the composer’s works by one of Jochen’s favourite orchestras have led him to hear this music afresh in recent years.

“I have not a particular composer,” he considers. “It’s all about discovering new things. Just by random, by chance. You go somewhere and – this is new, I haven’t heard this, I like this a lot!”

Given his affiliation with all things musical, Jochen harbours a little regret that he didn’t continue learning the trombone for more than a couple of years in his early teens. But he takes a pragmatic view, nonetheless: “There are people who play the music, but it’s also important to have people to listen. That’s where I see my role.”

He may feel as though his time for learning to play an instrument has passed, but he is well read when it comes to composers and the history of music. And for the future, learning more about the science of music – how it is composed and constructed, how chords and harmonies work – holds great appeal.

As well as having pure entertainment value, Jochen admits that the concerts he attends sometimes act as inadvertent breeding grounds for new ideas, particularly on Friday evenings, when thoughts of ATLAS can be hard to shake. Ideas are given time to breathe and develop, a luxury that they might not ordinarily get.

“If you have music, sometimes your thoughts are travelling away or so,” he explains. “You keep thinking, because you’re just sitting there, because you can’t act immediately. You keep expanding your thoughts.”

And so it was that one of the key ideas of Jochen’s analysis for his PhD came to him: while sitting in an opera in Geneva. Following his PhD, he went to Stanford to work on the BaBar experiment for two years. “I said bye-bye, but not goodbye forever,” he says, “I was always certain I’d come back.” The sense of involvement in the collaboration and acceptance as a scientist that he felt as a member of OPAL had made a big impression on him.

For the last eight years, Jochen has been based at MPI, spending half of his time as the Scientific Assistant to the Managing Director, organising meetings and elections, and working in public relations. The other half of his time is dedicated to ATLAS, where he has, admittedly “tried to do a bit of everything”, from maintaining a lab robot which built parts of the SCT hardware, to his current role working on the alignment software.

“I enjoyed the possibility to change and look at all the different aspects, so I was never doing one thing forever. And now I’m looking forward to doing analysis with real data,” he says, looking to the future, “doing something different.”