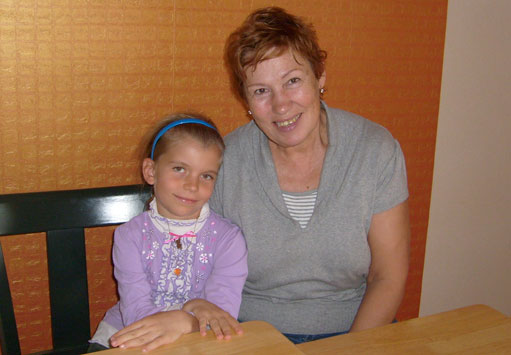 Moscow has been home to Lidia Smirnova for as long as she can remember. She was born in Ukraine, her mother’s region, shortly after the end of World War II. Her father, from Siberia, had served five years in the thick of the fighting, on the Soviet side. “He was wounded twice, but was really lucky to be saved with his life,” says Lidia. He was also very lucky to be stopped in Dnepropetrovsk, Ukraine, on his way from Germany to Japan. In that summer, 1945, he met Lidia’s mother.

“The life during this turbulence, many strange and interesting things can happen when people continue to reshape their life,” Lidia says. “A huge amount of people moved in different directions on the large territory of Soviet Union, and often disappeared.”

Luckily for Lidia’s parents, the turbulence was at its end. Her father was sent to a Moscow military academy to continue his education, and his young family came with him. Lidia remembers her childhood there fondly. “There were a lot of good teachers, good friends. I enjoyed my life in school and in university,” she says. “There was music…a lot of theatres and museums.”

In 1971, Lidia began her PhD studies with Moscow State University, where she has remained, with the Institute of Nuclear Physics. At the university, she met her first husband, with whom she raised two daughters. Once Elena and Inna had married, Lidia and her husband divorced. “We had different thinking about life, after 25 years,” she says.

Before 1991, Lidia was confined to the Soviet Union, and yet she did not find it confining. She enjoyed travels to places like Armenia, Belarus, Czechoslovakia, Kazakhstan, Poland, and Georgia, to meet with collaborators. The experiments brought her to Dubna, near Moscow, and Protvino, 122 kilometres south of her city.

Transitioning to the new perestroika, Lidia says: “I am thankful very much to Belgium Free University in Brussels and the University in Antwerp, where I received my first experience of cooperation with western colleagues in the 1990s.”

She joined ATLAS in 1993. In June of that year, she met former Spokesperson Peter Jenni at CERN, working on a proposal for Moscow State University to collaborate on ATLAS’s Microstrip Gas Chamber. It later was abandoned for the Transition Radiation Tracker.

“The TRT gas system prototype was constructed in our lab in Moscow and many ageing tests were fulfilled with it,” says Lidia. Her group is now in charge of commissioning the gas quality control system for the TRT.

Now, the group is working on a high level trigger B-physics – specifically, algorithms searching for rare B-decays. These decays are dear to Lidia and her colleagues, who have been preparing for many years. “The branching ratio of a very rare B-decay to two muons is the crucial test of the Standard Model,” she says.

Given her relatively long history with the collaboration, it’s no surprise that several of her former students have earned their PhDs and continued work on ATLAS. Lidia is committed to teaching high energy physics, continuing to supervise doctoral students and spending much time at Moscow State University as a lecturer.

While the end of the Soviet Union opened the world west of Berlin to Lidia, she also experienced the hardship felt by many scientists as their governments struggled to rebuild. “The life was very poor, and we felt that society was not interested now in science, in our work, and it was difficult from this point of view,” she says. “Now, it’s more or less stable. I think we have accepted that we do what we should do, and enjoy our work.”

On St. Valentine’s Day in 1999, Lidia met a scientist from another field, biochemistry, standing in a passport control line before departing from a Moscow airport. “I looked unhappy and he tried to talk with me,” she recounts. A cup of coffee before their different flights was enough to begin a relationship that became her second marriage.

Alexander Kulberg, “enthusiastic about work and future life,” helped Lidia examine the role of chemistry in the TRT’s ageing process. He also taught her about biology, the “role of water in life - something outside physics.” Beyond sciences, Lidia says: “We talked about everything and it was new level of understanding the principles of life - human, sciences, society, history. He had the highest level of human culture - in music, literature.”

The last two years of his life were very difficult, when he lost the ability to walk, and Lidia took care of him as much as possible. “It was not easy to return to life again,” she says. She keeps his poems, along with her own memories. “We were devoted to each other very much. It is important to feel that at least once during life.”

These days, Lidia spends much of her free time communicating with her two daughters and two grandchildren: Elena’s Dasha, who experienced her first day at school last week, and Inna’s Maxim, who recently enjoyed picking apple’s from his grandmother’s garden.

Lidia’s garden is a 70 kilometre train ride from Moscow. There, she keeps flowers, apple trees, and a summer cottage. “Weekends, I like to spend in the garden,” says Lidia.

But right now, the prospect of collisions in the repaired accelerator is forefront on Lidia’s mind. “It is for me the most exciting event in life, for this period,” she says.