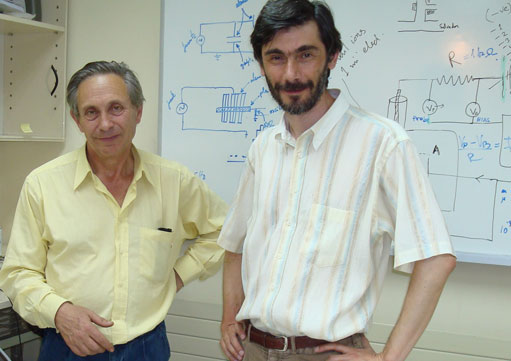 Mountains are an enduring presence in the life of Marco Aurelio Díaz. “Wherever you are in Chile, the Andes are there, and they make an imprint in your mind that time does not erase,” he explains.

Even with the Alps and Jura for company, he misses the mountains of home when he is spending time at CERN. His favourite peak is Punta de Damas, “Ladies Summit” near his home in Santiago, at the foot of the Andes. Three thousand metres above sea level, he is above the pollution of the city. “I love the isolation of the place, you can ‘hear’ the silence,” he says. “Sometimes I see a condor, sometimes I see wild horses.”

The hike is demanding, an 18-hour round trip for which he leaves home before sunrise and returns after sunset. Sometimes he enjoys the solitude, and sometimes he is joined by his sons, now university students.

Like the mountains, his wife, Cecilia, has featured in Marco’s life as long as he can remember. “Our families visited each other since before we were born,” he says. “My grandmother and Cecilia's grandmother, who were sisters, knew everything that happened in the family. They used to say that everything started when our mothers put us in the same crib.” They recently celebrated 25 years together.

In the early years, they weathered two earthquakes together, in Santiago in 1986 and in Santa Cruz in 1989. Their first son, Gonzalo, was born while they were still in Chile. Alejandro arrived after they had moved to California for Marco’s PhD.

“The whole family travelled around the world following my postdoctoral positions,” says Marco, and he credits Cecilia for keeping the family together.

His first postdoc was in Nashville, Tennessee: “a totally different country that seems to share only the language with California. The first thing I remember entering the city through the highway was the sound of the crickets and the lights of the fireflies.”

Next stop was Southampton, England. “What a beautiful country,” says Marco. “Always green, and we had there our first white Christmas. Despite the cultural differences, people there made us feel at home.”

They also spent time in Trieste, Italy, and Valencia, Spain, where Marco got in touch with his Spanish roots. “I met an enormous family from my father's side during our stay in Valencia.”

His fifth and last postdoc was in Tallahassee, Florida, which Marco considers a third country within the US. He notes that his family encountered less racism there than in Tennessee.

Gonzalo and Alejandro had a thoroughly bilingual upbringing, speaking Spanish in the house while they lived in English-speaking countries, and speaking English at home when they were living in Chile and Spain. In their various locations, Cecilia found work in accounting, teaching, and retail, but she eventually tired of the frequent moves.

Says Marco: “If not for my wife, I would still be a postdoc. I love to go from one country to another, staying a couple of years, enough to learn about different cultures and landscapes. But it was time to grow roots, so we came back to Chile.”

In 1999, they returned to Santiago, and Marco became a faculty member at Pontificia Universidad Católica de Chile (PUC). His sons both study there as well, Gonzalo in physics and Alejandro in engineering. Even so, they’re not too old to enjoy video games with Dad.

Marco joined ATLAS in October 2007, when PUC entered with Universidad Federico Santa Maria (UTFSM). Before these two universities joined ATLAS as the Chilean Cluster, open to other institutes in the country, particle physics in Chile was all theory. Marco was among the members of the PUC theory faculty that decided to switch to experiment and “learn things from scratch.”

“This is the first time I am part of a large collaboration, and I am impressed by the complexity of the work and by the sophistication of the organisation,” Marco says.

He and his students have contributed to the e/gamma trigger and monitoring the ATLAS Distributed Computing system, and they collaborate with a solid state physics group at PUC to study the effects of aging on the TGCs.

On the analysis side, he’s continuing his career-long interest in the Higgs and supersymmetry, which started with his PhD on quantum corrections to the supersymmetric Higgs mass. “To be part of the experiment that will discover them – I am very optimistic – is an honour as well as a responsibility, and it is extremely exciting,” says Marco.

Marco’s stints at CERN are relatively short, just a few weeks per year. Teaching responsibilities at PUC call him home. Because of the limited time, he has stays focused on work during his visits, but he enjoys the view of the Matterhorn or Monte Cervino.