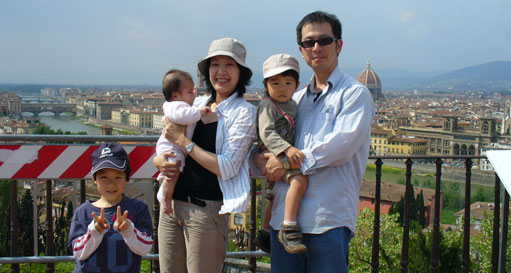 Osamu Jinnouchi had never left his native Japan when he first came to CERN, as a summer student with KEK, aged 25. “I don’t quite remember, but it was all impressive,” he ponders. “Everything was different here.”

He grew up in a suburb of Tokyo, a city with a population of around 13 million. “If you were at the center of Tokyo and climbed a high building, what you would see is just buildings, no space in between, until the horizon in all directions,” he describes. Even though Geneva is tiny by comparison, Osamu prefers a more rural way of life.

He now feels completely at home living just over the French border in St-Genis, but the sensation of being a stranger in a new land is still familiar to Osamu, and returns whenever he travels alone: “When I’m here I feel at home; everything is usual. But, for example, when I go to a conference, I feel like I’ve never been abroad.”

Things are completely different when he travels around Europe with his young family. “[They] are kind of my hobby,” he smiles. “We like to go travelling and sightseeing with guidebooks, it’s one of my best times.”

Osamu and family are very content with their life in the French countryside close to CERN. As well as the wonderful scenery, he also picks out the quality and range of food available in the local supermarkets as a big plus. His wife Miho has become something of an expert on French wines, having read up on the subject on the Internet, and their youngest son Naoki (3) and daughter Sawako (4 months) were both born right next door at Hôpital de la Tour.

An expansive list of FAQs drawn up over a decade or so by previous Japanese visitors helped ease Osamu’s passage into CERN life. He is grateful too that, unlike his predecessors who had to learn French in order to get by, he is able to speak English in most places, for example with doctors or his children’s teachers.

When English isn’t enough though, the family are finding that they now have their own little translator in their midst. Osamu’s eldest son Yuki (6) has been attending school in France for three years. “Before, he could just speak. If we asked him: ‘what were they saying?’ he couldn’t tell us,” says Osamu. Recently though, Yuki has begun making connections between Japanese and French, bridging the gaps for his family.

At work, Osamu’s role as co-convenor of the Monte Carlo (MC) group requires him to be something of a middleman himself, just like Yuki. “The MC group is kind of special because right now there are the physics groups and there are the combined performance groups, whose studies are both currently based on the event simulations which we manage,” he explains. The MC group, which provides event simulation to these groups, “kind of falls between them”.

He is conscious of the social realities of being in the ATLAS Collaboration, as well as the scientific ones: “It’s like working inside a big company. It’s a fun part of it actually!” he smiles, explaining, “If you do things with a collaboration, the important thing is not only the scientific technology itself, but also how you communicate with other people.”

Osamu’s term as MC co-convenor comes to an end in September this year. In the past he has worked across the spectrum from the low energy physics of an atomic experiment with positronium, to medium energy nuclear physics, and now high energy research with ATLAS. His particular interest here is SUSY searches, which he hopes to go back to, taking advantage of ATLAS’s multi-layer TRT to detect some of the long-lifetime particles that are predicted in some SUSY scenarios.

In the meanwhile, he’s been acting as a middleman of another sort. In April, he began a professorship with Tokyo Institute of Technology, where he will begin teaching full-time in October, and is currently part of a group of people helping to bring the group into ATLAS.