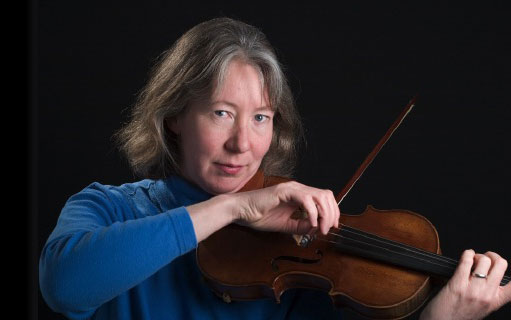 For SCT Project Leader, Pippa Wells, thoughts of precision, timing, collaborative working, and getting things to work in harmony are familiar to her both in and out of work. Her passion is playing the violin – specifically in orchestras. “It’s always been playing music with other people that has motivated me,” says Pippa, who picked up her first instrument when she was just six years old.

By age 15, she was part of the National Youth Orchestra of Great Britain, and she played with Cambridge University’s Symphony and Chamber Orchestras throughout her university days. At some point in her mid-teens, she made the decision to pursue science as a career, rather than music. It wasn’t too tough a decision though, she recalls: “You can do music to a reasonable level as a conscientious amateur, but you can’t do amateur particle physics!”

And conscientious she has continued to be; she now plays with the Orchestre Symphonique Genevois, whose latest concert will be held on November 23rd. This is a lot more like the ATLAS Collaboration than people might first expect. “There’s a lot of structure and symmetry in music, even though it’s got these artistic and creative overtones,” explains Pippa. “You’ve got to have a lot of discipline, you’ve got to work as a team, you’ve got to pay attention to detail,” she adds; all essential ingredients for making ATLAS work.

Outside of the orchestra, the international “CERN microcommunity”, as Pippa calls it, has been the source of walking and skiing companions, and friendships, during her time here. Since having a family though – she is married, with an eight-year-old son and six-year-old boy/girl twins – she has found herself becoming more involved in her home life.

But she still finds time to communicate her excitement about ATLAS and physics in general. She has contributed to numerous radio and television documentaries, including one which involved a billiard table covered in paint being taken into the pit. After the rack had been broken, through a ring of pint, some of the balls were removed. “The trails that the balls made in the paint were used to explain about missing momentum,” explains Pippa. Surprisingly, this wasn’t her oddest experience on camera. That accolade goes to the funding agency publicity material, which, she explains laughing, “has a shot of my bum disappearing as I climb up a ladder!”

Pippa is a little surprised to note that she’s been at CERN for over 20 years. “Somehow that happened,” she laughs. “When I came as a summer student on OPAL, I thought it was for six or eight weeks!”

That was in 1986, and soon afterwards, she began her PhD on UA2, looking for the top quark with the SPS collider. Visits of several months at a time eventually turned into a permanent residency when she became a CERN fellow in 1990, working on OPAL at LEP, and was later awarded an indefinite position as a CERN staff member.

Pippa has been elected to become Project Leader for the whole of the Inner Detector in March 2009 – a sure sign that her colleagues have faith in her work. The last three years spent as SCT Project leader have “had their moments” according to Pippa, who recalls the trials and tribulations of the infamous cooling system, and the time that Marzio Nessi had a shipyard crane booked to lower the endcap toroid magnet into its place in the pit, whilst the ID teams were racing the clock to complete their installations in time, before the access was blocked.

She describes her challenge as: “Knowing what everyone’s doing, knowing who needs to know about it, and knowing which activities are critical at a particular time.” Her role as an organiser and facilitator leaves her no time for physics or hardware work, but she is not too bothered about the latter. “I’m not one of life’s plumbers,” she concedes of her skills with a spanner.

Pippa will take on her new responsibilities during the phase-shift from installation and commissioning to ATLAS running. But even though she has one of the best overviews of the whole experiment, she still feels as though she is learning new things: “You can’t have the full breadth and the in depth detail, so I think a lot of it is about knowing who knows what, joining the right people together, and making sure they’re talking to each other.”

You can catch Pippa playing with the Orchestre Symphonique Genevois at the Victoria Hall, Geneva, on November 23rd. Tickets and information can be found on their website.