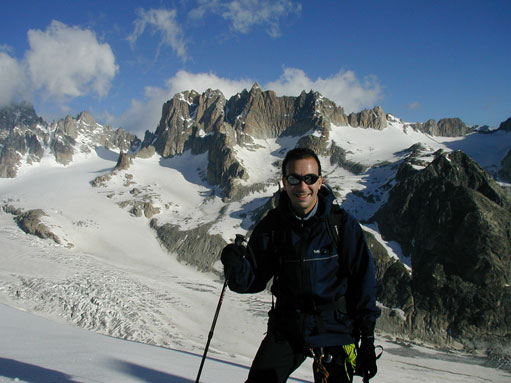 Rachid Mazini grew up in Casablanca, Morocco. Although he’s now a big fan of rugged terrain, he spent his youth as a “city boy” with holidays on the Atlantic shoreline. It wasn’t until he started university in Marrakech that he began to explore the mountains – the Atlas range, in fact.

“Once I was there I started getting more interested in mountain activities like hiking,” says Rachid. These activities have since multiplied, and he now enjoys mountaineering, skiing, and snowshoeing as well.

He spent the early years of his college education at the Université Cadi Ayyad, which he describes as more fun than the following years when he began participating in experiments through the Strasbourg Centre for Nuclear Research. “You know the first years of undergrad. Basically one studies, but also one discovers different kinds of things, of life and freedom,” he says.

Even though the language was the same in Strasbourg and Marrakech, he experienced a bit of culture shock, navigating a new education system and being away from family and friends. “One really needs to keep trying and not get discouraged by the change, because it’s really a radical change,” he recalls.

But he could always count on the support of his parents, and their encouragement to keep pursuing his studies. And he did, participating in the design and construction of particle detectors and physics analysis for the fixed target experiments NA38 and NA51 following his Master’s studies. And when an opportunity arose that would bring him further afield, to Canada, Rachid was ready to take the chance.

“I went there because I met Professor Pierre Depommier,” says Rachid. “He was one of the very first high energy physicists at CERN.” Pierre Depommier had indicated that Rachid would be welcome, and Rachid decided that he would join the Université de Montréal and ATLAS. “I knew some people there and it was easy to integrate,” he says.

His second PhD supervisor, Georges Azuelos, set Rachid’s gold standard for good teaching. He worked alongside his students, encouraging collaborative discussions of any roadblocks. Trying to live up to that example, Rachid strives to create an open culture within his group and to be an approachable supervisor so that any problems can be solved through teamwork. “It’s very important not to have strong hierarchy between different people,” he says.

With a move to Toronto in 2003, Rachid began to split his time between ATLAS and Fermilab’s CDF experiment. Working on a running experiment, he gained experience dealing with real data taking and analysis while he helped prepare for physics at the Tevatron’s successor.

He spent some time at Fermilab, but for Rachid, the flat landscape of the upper Midwestern United States doesn’t hold a candle to the peaks not far from Geneva. “This is what I love about CERN – the location is fantastic,” he says.

In addition to his other mountain activities, Rachid started rock climbing in Montreal and has continued such expeditions over the past decade. “I tried every possible climbing technique and style,” he says. He climbs with friends, both for safety and because they are part of the fun, as he explains: “It’s not just the climbing part, it’s spending the whole day with somebody so there’s lots of exchange and discussions.”

Last year, Rachid also began taking advantage of Lac Léman as well as the Alps and Jura – he joins voyages with CERN’s sailing club. He can sail smaller boats on his own, but he has yet to learn the ropes of the larger crafts.

Rachid met his future wife at a conference in Puerto Rico, in 2006. She’s a CMS physicist who shares his enjoyment of the mountains, and she is the reason for his most recent change in affiliation to Taiwan’s Academia Sinica, stationed at CERN.

He enjoys the open atmosphere of his new group, the motivation of the students, and the diversity of projects available. He’s currently looking into missing transverse momentum in the Inner Detector and tau-related physics. One of his areas of interest is the Higgs decay to two taus, but he notes: “We need more luminosity and higher energy for these detections, so at the beginning we will just look at Standard Model physics such as W and Z decaying to taus.”

Like many others at CERN, he was watching the ATLAS event displays on March 30th, and he was impressed with the detector performance, revealing photons and jets clearly from the start. “To see that the detector was working, and the infrastructure was working,” says Rachid, “that was actually really nice, that it happened this way from day one.”

And watch this space for his upcoming article on missing transverse momentum.