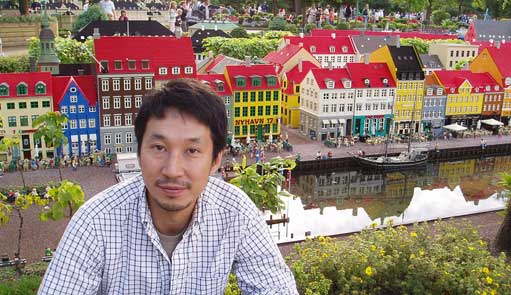 Soshi Tsuno didn’t know much about particle physics until he met professor Hiroshi Takeda in his fourth year at Kobe University in 1996. At the time, ATLAS collaborators there were already developing the thin gap muon chambers (TGCs) that reside in both the large and small wheels, and Soshi joined this work.

Soshi admits: “I had no strong feeling to decide why I've chosen high energy physics.” Many of us can cite a good teacher who captured our interest and influenced our career path, and for Soshi, this professor was Mitsuaki Nozaki, now Vice President of KEK.

After he finished his degree, he moved on to Tokyo University for his Masters course, still working on the ATLAS experiment. Studying under Tomio Kabayashi, he continued developing the TGCs, looking for the optimal wire spacing and strip width, as well as choosing a gas to fill the chambers.

His PhD work took him to Tsukuba University in 1999. There, he was faced with the choice of working on LEP just as it was closing down, or run II of the Tevatron as it was about to begin. He chose the newer experiment, joining CDF and travelling to the US in 2000.

His wife, who he met at Kobe University and married in 2000, had no objections to living abroad. The first year in a new culture was difficult, but they made friends and came to love life in the US.

Working with the silicon detector group, Soshi helped with the installation and developed the calibration monitoring tool, which is used in database analysis. However, the run met with delays and didn’t start until 2002. As a result, he had very limited data available for his thesis.

“My original thesis topic was the search for MSSM Higgs to four bottom quarks,” Soshi explains, “but in the end, my doctoral thesis was settled to be a measurement of W+jets process.”

With help from Michigan State University’s Joey Huston and CERN’s Michelangelo Mangano, he earned his PhD in 2004. Soshi remained at Fermilab for another two years as a post-doc on CDF, working on Monte Carlo simulations before coming to CERN in 2006.

“It was 10 years’ journey,” says Soshi. Now working with the tau trigger group in ATLAS, he is an editor in the search for a Higgs boson decaying to two taus.

Living in Thoiry the past two years, Soshi says that he and his family prefer Europe. “The food is healthier,” he observes.

He is also glad to take up downhill skiing again. He used to ski in the mountains of Hokkaido, in Japan, but the land around Fermilab is relatively flat. His family, including his seven-year-old daughter and four-year-old son, also enjoy skiing in the Alps.

The kids are both too young to understand Dad’s work, although he has shown them some of his plots. “My daughter thinks I’m an artist!” says Soshi, whose physics analysis is cleverly disguised as computer graphic design.

He also harbours a secret talent – building with Lego. So far, his favourite achievement is a car with a working transmission, built from a set when he was around the age of twelve. However, he and Stefan Lueders, of the IT division, hope to one day build a models of the ATLAS and CMS detectors, respectively. “That is my dream!” says Soshi, in terms of his Lego ambitions at least.