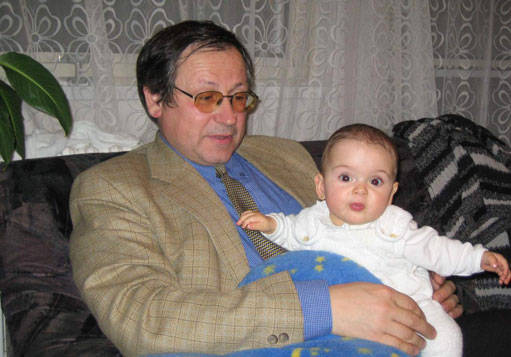 In his more laid-back free time, Stanislav Němeček enjoys good detective novels and a production about a fictional Czech genius by the name of Jára Cimrman. The legends of Cimrman began in radio shows but later became plays in two parts: a lecture by a “professor” about recently uncovered work by this scientist/inventor/writer/philosopher and a scene played out by actors. The idea of Cimrman has been around since 1966, beginning as sort of a comic, literary protest to Communist rule. New episodes are performed every few years. Though a fictional genius, Cimrman is a symbol of Czech pride.

A proud Czech himself, Stan makes a point of coming home to his roots for a month every year. He has TileCal business to attend to at his home institute in Prague, the Academy of Science where he earned his PhD.

Stan spends most of the year in a loaned studio apartment in St. Genis. When his wife, Jana, is there with him, they like to make excursions into the mountains and different towns. “Last year, for example, we visited the coast of the Atlantic Ocean,” he says. They used to hike, but now they tend to enjoy the mountains more through downhill skiing. In the February 24th interview, Stan said, “Just last week, I was in the Jura.” He and Jana try to spend a week in the Krkonoše mountains of the Czech Republic each year as well, playing with their three young granddaughters.

Stan and Jana met at Charles University in Prague, when he studied physics with a specialisation in nuclear, and she followed courses in chemical physics. His daughters, Michaela and Soňa, studied there as well. Soňa is still pursuing her studies of geography, also examining the environment in her PhD research devoted to hydrological modelling. Michaela, the oldest, now works as expert in molecular genetics. Jana splits her time between St. Genis with Stan and at Carlsbad with Michaela and her daughters.

“In the summer, we like to make some walking in Geneva,” says Stan. He’s also been known to play chess in the Parc des Bastions in Geneva, on the large boards painted onto the asphalt. A few years ago, Stan was more active in the CERN Chess Club, but now it’s more of a casual interest.

When Jana’s not around, Stan spends much of his time at CERN. “I go from maybe 8 AM to 11 PM,” he says. He can be found in his building 40 office, down in the pit, or in building 175, working in the lab on a slice of TileCal that will allow surface testing of Hardware and Software, including ageing studies with cosmics and caesium source. Stan is responsible for the Tile maintenance, mainly low voltage power supplies, and he plays a supervisory role over some of the electronics in USA 15. He is also an ATLAS guide, braving the stringent new rules for cavern visits.

“I am really one of ATLAS’s oldest members,” says Stan, who worked on research and development for calorimeter and inner detector designs as early as 1992, before EAGLE and ASCOT merged.

Particle physics attracted Stan for its newness, popularity, and rapid evolution during the late 1970s and early 1980s. Like Vato Kartvelishvili, Stan studied the new charm quark through experiments in Protvino, Russia. He earned his PhD from the Institute of Physics, at the Academy of Science in Prague, in 1982. His first CERN experiment was NA4, deep inelastic muon scattering in Prevessin, from 1985 to 1986.