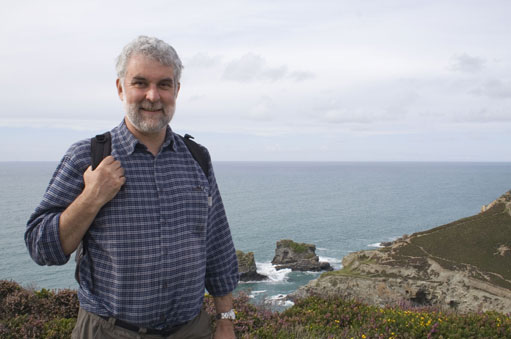 Talking to Steve Lloyd, you can’t help but get the sense that the influence of this softly spoken, polite Brit is woven into the very fabric of CERN. As the author of the improved ATLAS Computing Workbook, he has certainly touched the working lives of all new members of ATLAS since 2005, but his reach extends further than that.

It all started in 1978, when Steve got his PhD from Imperial College London while working on a fixed target experiment in the CERN East Hall. The next six years of his early scientific career took him away from CERN to DESY in Hamburg, Germany – first as a Research Assistant with Imperial, and later during a temporary lectureship with Oxford University. During these times, he worked on the TASSO and ZEUS experiments, but when he returned to CERN experiments in 1984, it was for good.

“I was appointed as a 'New Blood' lecturer at Queen Mary College – now Queen Mary, University of London – and worked on the OPAL electron-positron experiment at LEP throughout the 1980s and 90s,” says Steve. In 1990-91, he was based in Geneva as OPAL Physics Coordinator, and it was during these years that he wrote the 'OPAL Primer', an instruction manual which he has maintained ever since and considers to be at least part of the inspiration for the ATLAS Computing Workbook – an ATLAS software guide for beginners.

“Four years ago now, I went to a meeting and complained about the state of the ATLAS documentation – how you couldn’t find anything, how there were conflicting statements and so on,” Steve remembers, “and they said ‘Well why don’t you write something better?’ So I did!”

The Workbook is housed on the Twiki pages, and covers everything to do with ATLAS computing – from how to set up an account, to how to run simulations and reconstructions. Nowadays, there are two spin-off workbooks under construction: “Once you’ve mastered the basics, you can then go into either of these, depending on whether you’re doing physics analysis or software development,” explains Steve, who is Convenor of the Software Infrastructure Team and looks after bits of the CERN Twiki, tidying it up and writing scripts which help to manage it better.

As well as clarifying some of the workings of ATLAS for the benefit of the Collaboration, Steve is also helping to publicise CERN to a new generation of inquisitive minds. He is involved with the MasterClass scheme, which offers 16-to-17 year olds a chance to feel what it’s like to be part of a large physics experiment by challenging them to search through real LEP event data, and gives regular talks at high schools in the UK. “Apparently their teacher promised to bake them a cake if they managed to ask me a question I couldn’t answer,” he laughs, recalling a recent outing.

Steve is well placed to talk about ATLAS, since he has been around from the very beginning. He was involved in preliminary discussions about the project in the early 1990s, and spent 1998 to 2000 doing simulation studies of radiation levels for a new beampipe design. As someone who has been involved for so long, he feels an element of disbelief now that data-taking is edging closer: “It’s always been five more years away; it’s hard to believe we’re actually here,” he smiles.

Since 2001, Steve has turned his attention towards Grid computing and is currently Chair of the UK Grid for Particle Physics (GridPP) collaboration, the UK arm of the Grid, helping to manage and allocate Grid resources at UK universities. He is also involved in managing the ATLAS UK e-Science project and runs and reports on diagnostic tests of ATLAS code on UK Grid sites.

Considering how technical his daily work is, it’s hardly surprising then that Steve likes to spend his free time enjoying the more simple pleasures in life. He lives an hour or so out of London, in the Essex countryside, where he lists his predominant activities as “walking, eating, and drinking”. His ‘techie’ inclinations don’t go completely un-indulged though, as he admits to “fiddling with computers and doing a bit of digital photography” in his spare time too. He spends his commute to and from Queen Mary’s catching up on his reading, which is often comprised of students’ theses.

As one who has been involved in multiple and varied aspects of the ATLAS journey from the very start, Steve is pretty clear about what he hopes the experiment will throw up in the coming months and years. “I hope we discover the wretched Higgs!” he laughs, later adding: “Having spent most of my career failing to find the top quark at TASSO and OPAL, I’m looking forward to being able to study it in detail with ATLAS!”