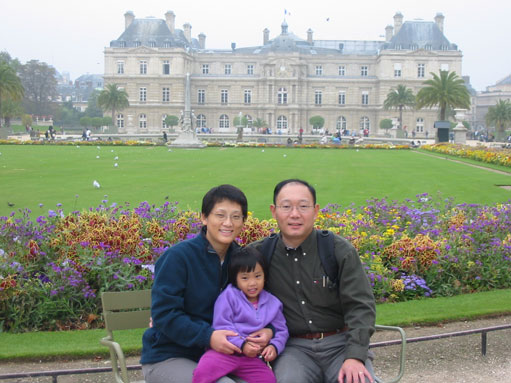 Yongsheng Gao was born in Jinan, the capital of the Shandong province of China, also the home of Confucius some 2500 years ago. The Yellow River flows by Jinan, the ‘City of the Springs’, with the Mountain Tai nearby.

He stayed in the city through his undergraduate and master degrees. “China was very isolated back then, and the government was controlling everything,” says Yongsheng. “Things were very different.”

China was just beginning to open up in 1988, when he had the opportunity to enter a PhD program at University of Wisconsin-Madison in the US. With this move, Yongsheng experienced culture shock, and language barriers made forming friendships more challenging. “But mostly, I was very excited,” he says.

“It was in the fall of 1988, and the fall season was the best. All the trees, the yellow leaves, the lakes, so it was beautiful. It was like heaven,” he describes. November through March tempered his enthusiasm for the new climate: “Winter is miserable; it’s very cold. But still it was lots of fun with all the snow.”

Yongsheng only spent his first two years in Madison, Wisconsin while he completed all the courses. His thesis on the ALEPH experiment at CERN brought him to Geneva for five more years. A long-time badminton player, he joined CERN’s badminton club. He teamed up with Mathias Beck, also at CERN at the time, to win the champion’s title for the men’s double in the 1994 Geneva tournament. In 1995, he and his partners earned second for the men’s and mixed doubles in Geneva.

Yongsheng stayed with University of Wisconsin-Madison until early 1996, when he moved to Harvard University as a post-doc. Working on the CLEO experiment at Cornell University, he spent most of his time in Ithaca, New York. There he met his wife, Weihang Chai, an avid badminton player like himself. “She was doing her PhD in biology at Cornell University back then,” says Yongsheng.

He was delighted to find out that Weihang is also from Jinan and graduated from Shandong University as well, only a few years after him. They visit their shared hometown, and the family and friends still living there, every couple of years. In Ithaca, Yongsheng coached Weihang in badminton, and the pair competed together in tournaments. “We got championship once in Syracuse,” he says, in 1997.

After over a decade of working for US universities, Yongsheng became a US citizen. “The environment to carry out high energy physics research was less ideal in China back then,” he says. “While there has been enormous progress in the economy, the progress in other aspects has been less encouraging.” Nevertheless, he is glad that Shandong University is a collaborating institute on ATLAS.

Also during year 2000, Yongsheng joined Southern Methodist University, in Dallas, Texas, becoming team leader of the SMU CLEO group in 2001. He got involved with ATLAS as well in 2002, focusing on particle identification, new methods to search for new physics, and supervising post-doc and graduate students.

Having experienced the US from Midwest, East Coast, and Southern perspectives, Yongsheng completed the loop with a move to the West Coast – Fresno, California. California State University is the largest university system in the US, with 23 campuses scattered around the state, but Fresno is the only campus with links to ATLAS or CMS – links that Yongsheng is largely responsible for forging.

“Starting a new program, starting from scratch, is a lot of work,” he says, “but it’s a lot of fun also.” With work weeks as long as 70 hours, he spends most of his time on campus.

But while he’s staying in Fresno, Yongsheng doesn’t have a family to come home to – Weihang and their seven-year-old daughter, Helen, are up in Spokane, Washington. Weihang is a biology professor at Washington State University. Although it means seeing his family only every 3-4 weeks, with a thousand-mile plane journey to reach them, Yongsheng keeps a sense of humour about it: “That’s what we call a two-body problem.”

Although the Fresno campus is a start for the ATLAS program at California State University, Yongsheng wants to see it expand, providing opportunities for students on the 22 other campuses to get involved. One recent small victory came through the summer student programme – in addition to students from Fresno, he was able to send another from the Sacramento campus. The CSU ATLAS consortium he’s building up already has six campuses on board.

Yongsheng is particularly excited about an opportunity to collaborate with Florida International University, which is on CMS, to work on a grant proposal for the US National Science Foundation. For all our good-natured rivalry, physicists on ATLAS and CMS are happy to cooperate – in this case, on efforts to extend the impact of university involvement at CERN.

For CSU Fresno, not only could Yongsheng bring the cutting edge of particle physics to more campuses, but the programme would also cross disciplines, pulling in talent from engineering and computer science programmes. He’d also like to send guest lecturers to nearby high schools.

In addition to Fresno and Spokane, Yongsheng must of course spend time in Geneva, keeping up with the collaboration at ATLAS weeks. And although he is perhaps less serious about badminton than he used to be, he says: “Every time I go to CERN, I bring my racquet.”