So I’m back from the Ars Electronica 2011 festival in Linz, Austria. This year the guest of honor was CERN, to kickstart a cultural partnership which will endure over the next three years. The event was amazing, and the organization spotless. As Claudia mentioned in a previous post, CERN was well represented visually at the festival, mainly via a strong display of ATLAS multimedia throughout the many exhibit halls and events.

I participated in two panels on Saturday. The first one was on ‘Open Research’. I talked about ‘Open Educational Resources’, and introduced the audience to a new set of applications we have been developing for outreach purposes and use in Masterclasses, called AVION and CAMELIA. The latter is a kind of ATLAS simulator, where users can navigate interactively through a realistic looking model of the experiment, view it in a beautiful artistic transparent rendition (we call it “jelly”), and load and display events. These events can then be analyzed with tools built into the application. And you can run it in a Mac, Windows PC, Android, iOS or even in a browser, following the installation of a small plugin.

One feature of CAMELIA which makes it a very original open educational resource is its ability to record, edit, upload and share actions trough a system called ‘DIVE’. It’s like an automated guided tour of an event analysis, complemented with subtitles, and will in the future include multimedia explanations of physics concepts. Your very own electronic tutor! In a few months it’ll be possible to plan and share whole lectures or Masterclasses trough this system. We already plan to release a public beta of this application by October.

The other panel was called ‘Inside CERN’. There I was in amazing company, sided by CERN colleagues Michael Doser, Dietrich Liko and Werner Riegler. Together we presented an overview of what we do at CERN, the history of particle physics, what is it like to work in an experiment involving such large collaborations spanning across many countries and institutions, what are the fundamental questions we aim to answer by doing fundamental research in High Energy Physics, what do we really see inside a detector, and how do we filter that data… It was a two-hour long presentation and session of questions and answers, which kept a very interested audience amazingly engaged.

I made my talk entirely using the multimedia slide system embedded in CAMELIA, and the inbuilt interactive event analysis tools. This was preceded by a virtual fly-by of the ATLAS site and cavern using AVION. The talk took place in a special room at the Ars Electronica Center called ‘Deep Space’. It consists of a gigantic 16-meters-wide by 9-meters-high display, ideal for colorful multimedia presentations. Physicists from other experiments took advantage of that fact too, as well as ATLAS’s extensive multimedia collection, to spice-up their presentations (as you can see in the picture above).

Then on Sunday night, something very special and beautiful happened. In a concert session during the Große Konzertnacht at the Brucknerhaus (the city’s biggest concert hall), the Bruckner Orchestra of Linz interpreted ‘Mysterious Mountain op. 132‘ by composer Alan Hovhaness. And what did they project on the Cinema screen behind..? Just check out the video below:

Those tracks are LiveEvents (TM) from ATLAS! They’re visualizations made by digital artists Daito Manabe, Motoi Ishibashi and Satoru Higa with help from myself. They also captured the maestro and front row musicians’ 3D outline with Kinect devices, and superimposed it over our live data. Absolutely fantastic. I had never seen anything like this before. I’ll keep in touch with the artists, and make sure we’ll have more interactions like this.

I came back full of fresh ideas to enhance our outreach arsenal, and contacts of renowned artists interested in collaborating in our future multimedia projects. This was also the first public trial of CAMELIA and AVION outside CERN. The comments from the public and artists on the new set of tools were encouraging and inspiring. Watch this space! 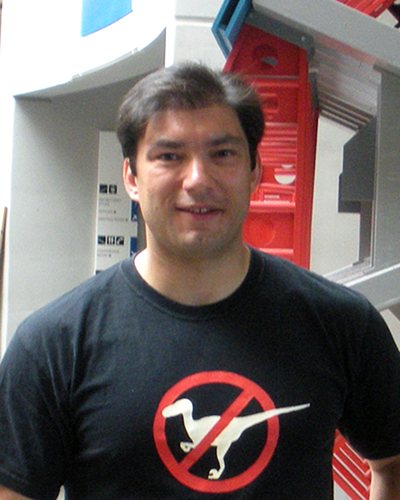 Joao Pequenão is a visualization expert and digital artist with background in physics. He works for the Lawrence Berkeley National Laboratory and the ATLAS Experiment. His main focus is producing multimedia portraying scientific concepts in an artistically appealing and accurate way.