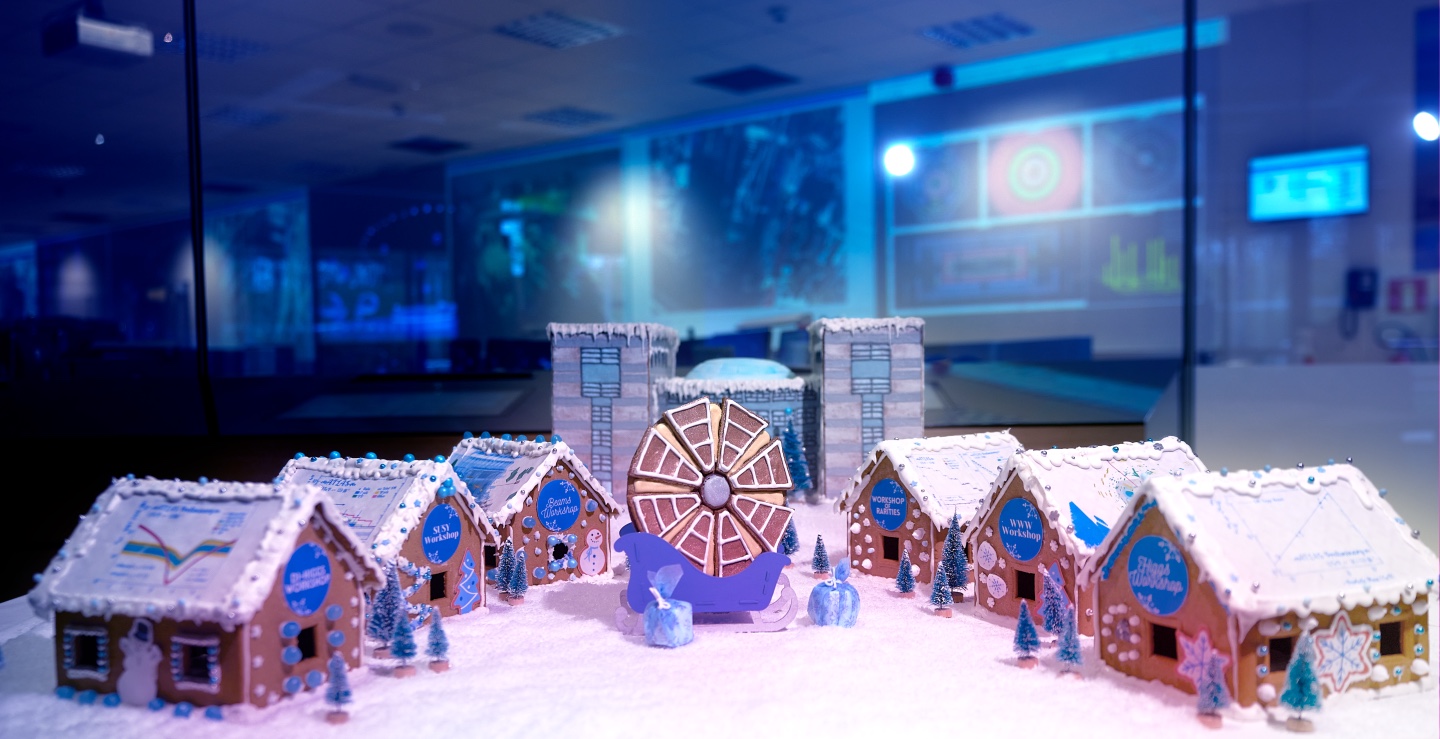 Every year the ATLAS Collaboration produces an end-of-year greetings card, and every year the outreach team are in competition with themselves, trying to out-perform last year’s effort. The cards are sent to ATLAS institutes and funding agencies and always showcase some ATLAS highlights from the year. When I received an email from the ATLAS outreach coordinators in October, asking if I would help them make an ATLAS-inspired gingerbread village for this year’s card, I couldn’t refuse an opportunity for another fun “Physics Cakes” project.

The brief from ATLAS management was that the card should feature the “New Small Wheel” muon detector (that was completed and lowered down into the cavern this year), plots from a selection of our most high-profile physics analysis results of the year, as well as the successful operation of the ATLAS detector during the LHC `beam splash' events.

The outreach team and I met to brainstorm some first ideas and came up with the concept of a series of themed workshops, each displaying one of its most noteworthy results on its roof. A gingerbread New Small Wheel sits on a sleigh in the centre of the village, en route to its new home in the experimental cavern underground. At this point the outreach team announced that we’d also need a backdrop to make sure that the scenes were recognisably CERN and ATLAS-related. My colleague Katarina Anthony asked me, “maybe this is crazy, but could you make Building 40 out of gingerbread?”

Building 40 is one of the most distinctive office buildings at CERN, and houses a large proportion of ATLAS and CMS physicists. The central part of the building has curved walls and a glass domed roof. It’s unique architecture makes it a great choice for a recognisable CERN landmark, but curved walls and domed roof are not the easiest structures to make out of cookies! As luck would have it, making Building 40 out of gingerbread had been at the back of my mind for some time as a potential baking project, so I already had a plan for how to do this technically, and this was a great excuse to finally make it happen.

As you might imagine, building a gingerbread structure on this magnitude requires a fair amount of planning. With a bit of help from photos and satellite images, the first step was to draw up plans to scale, figuring out what components were needed, and how these would all fit together. Once I was happy with the plans I made cardboard mockups that would also then form the templates for cutting out the gingerbread dough. The curved gingerbread walls of Building 40 were formed by draping the cookies, still on parchment paper and hot from the oven, over a cylinder of the right diameter. The domed roof is the only non-gingerbread part of the village and is made from rice crispies and melted marshmallows, and then covered in fondant. The walls are glued together with royal icing, which is also used to decorate everything

We enlisted the help of some other keen ATLAS bakers, Stefanie Morgenstern and Elise Le Boulicaut, to help decorate the gingerbread house workshops, and the plots on the roofs of the workshops are printed on edible paper. An event display showing the ATLAS detector all lit up as the LHC beam is steered onto a collimator upstream of the detector and the resulting spray of particles ‘splashes’ through it, graces the roof of the Beams Workshop. The other workshops showcase a handful of our highest profile physics results. My own favourite plot from this year is displayed on the roof of the “DiHiggs workshop” and shows a combination of the results of our searches for Higgs pair-production.

Building physics-themed gingerbread villages is certainly not something I would have imagined a few years ago that a career as a physicist would involve, but it’s definitely a lot of fun. The only thing that worries me now is how we’re going to top this next year!

Learn more about the results and milestones featured in the village: 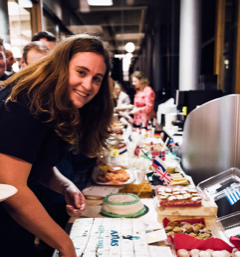 /*-->*/
Katharine Leney is a Research Assistant Professor at Southern Methodist University in the US. Her research focuses on searching for pair-produced Higgs bosons and determining how the Higgs boson interacts with itself. She coordinates the ATLAS “Higgs and Di-Boson Searches” group. In her spare time, she can be found skiing, hiking, playing the piano, or baking physics-themed cakes. 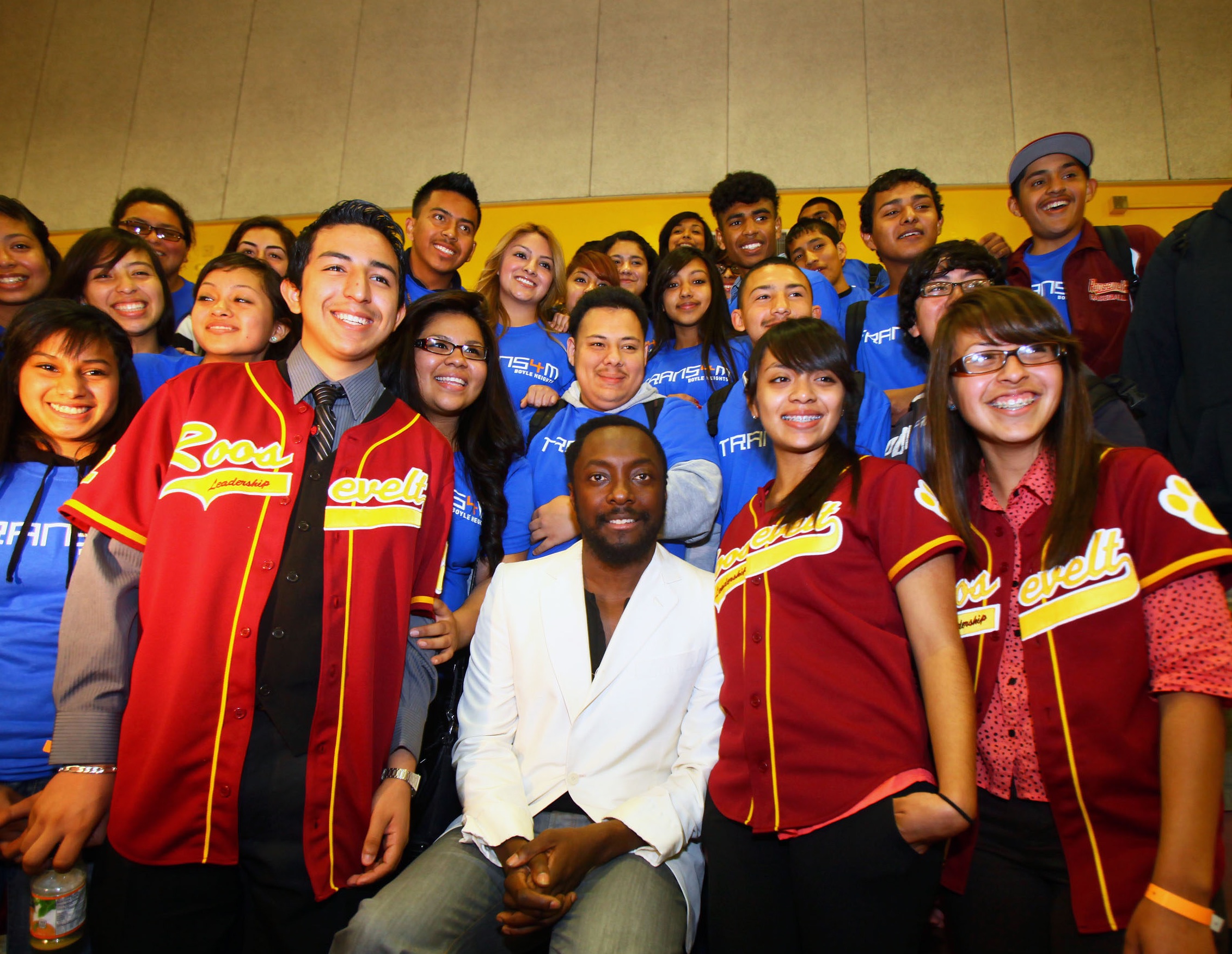