From ATLAS Around the World: Brief history of Morocco in ATLAS

In 1996, Morocco officially became a member of the ATLAS collaboration. The eagerly awaited day had finally arrived, and the first Arabic and African country signed a collaborative agreement with CERN to participate in the great scientific adventure of particle physics. This achievement was possible thanks to the efforts of a small group of physicists that recognised the potential benefits of collaborating with large accelerator centres.

Morocco’s participation in ATLAS started even before its membership was approved in 1996. In 1992, Moroccan researchers contributed to the construction of a neutron irradiation station. After that, they continued boosting their contribution by playing a key role in the construction, testing and commissioning of the ATLAS Electromagnetic Calorimeter (ECAL) presampler during 1998-2003 period. Since then, Moroccan researchers have been working to strengthen the long-standing cooperation with CERN. Currently, there are 27 faculty members and research assistants, including 9 active PhD students.

The research interests focus on these topics: the search for new physics phenomena in association with top physics, Higgs physics and B physics, including a significant participation on the detector performance studies. During the LHC’s Run 1, Moroccan researchers contributed to the success of the ATLAS experiment. This success has motivated our researchers to look forward to a very successful Run 2.

In addition, we are involved in the distributed computing effort. During ATLAS data taking periods, user support becomes a challenging task. With many scientists analysing data, user support is becoming crucial to ensure that everyone is able to analyse the collision data distributed among hundreds of computing sites worldwide. The Distributed Analysis Support Team (DAST) is a team of expert shifters who provide the first direct support for all help requests on distributed data analysis. Alden Stradling (University of Texas, Arlington) and I (Mohammed V University) coordinate the overall activity of this team.

In terms of building local expertise, several schools and workshops have been organized. Outstanding worldwide experts have participated, giving lectures on particle physics, nuclear physics, applied physics and grid computing. Most participants are master’s degree or PhD students already working in these fields, or in related fields and seeking a global dimension to their training. Such schools include: “L’Ecole de Physique Avancée au Maghreb 2011” in Taza, “tutorial training on statistics tools for data analysis” and the “Master of High-Energy Physics and Scientific Computing” in Casablanca. High school students from Oujda participated in the International Masterclasses in March 2015, which aimed to encourage them in doing science, and gave them an introduction to what we do in ATLAS and why it is interesting and exciting.

After the success of the ATLAS Liquid Argon Week organized in Marrakech in 2009, the ATLAS Overview Week for 2013 was hosted in Morocco. It was our great pleasure to invite our ATLAS colleagues to this important event in Marrakech. There were many interesting talks and discussions at the event. We took a brief time out to watch the announcement of the 2013 Nobel Prize in Physics. To our delight, it was awarded to François Englert and Peter Higgs for their pioneering work on the electroweak-symmetry-breaking mechanism in 1964. It was a very exciting moment for me. 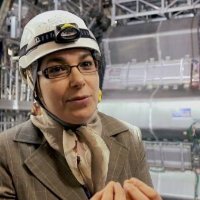 Farida Fassi is a research assistant professor at Mohammed V University in Rabat. She started working in ATLAS in 1996 doing her PhD at IFIC in Valencia, Spain. She worked in the online and offline test beam data analysis of the first prototypes of the Hadronic Tile Calorimeter modules. This was in addition to top physics analysis. In 2003, she began working in Grid Computing and Distributed Data Analysis. She had a CNRS post-doctoral research fellowship working on the CMS experiment while based in Lyon, France. She was the coordinator and contact person of the French CMS Tier-1, and continued her search for new physics phenomena. In 2011, she came back to ATLAS focusing on the search for the ttbar resonances. Farida is the co-coordinator of the Distributed Analysis Support Team.