Want a small scale LEGO® version of the ATLAS detector?

A small scale version of the ATLAS detector can be made available as an official LEGO® product, but I need people to vote for it at LEGO Cuusoo. We need 10,000 votes to be considered by LEGO®.

Since I presented the original ATLAS LEGO® model in 2011, it has been featured in many outreach events all over the world. The original model has 9517 pieces in total and reassembles the real detector in high detail to a scale of roughly 50:1, matching a little plastic man. A smaller version, approximately 22cm in length, has been designed and shipped 111 times to more than 20 institutes. However, I want to make the smaller model accessible to a wider audience, enabling us to use it for educational purposes, as prizes in competitions, as interactive exhibits and for sales in the ATLAS souvenir shop.

There is huge interest in the LEGO® models. Already, 35 ATLAS institutes have received and built their own versions of the large model and used it on various occasions. Some have used it simply to explain the look and function of the ATLAS detector and others as a mean of getting students involved in constructing the model while discussing the real experiment. It is also always an attractive display at physics conferences.

This June, for the inaugural event of Passport Big Bang, the LEGO® models were used as inspiration for a competition called “Build Your Own Particle Detector” in which both children and adults were invited to be creative and build their own design from the 15 kilos of bricks I provided at the site. More than 300 children along with their parents filled up the tent. The contest lasted for four hours and at the end of the day, we had 82 designs! The event turned out to be a much bigger success than we expected.

We are hoping to get more votes than required. After all, the LEGO® plastic building blocks can come in handy when trying to explain the search for the real building blocks of the universe. Please vote and share. 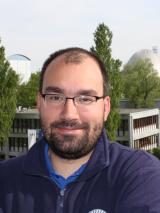 Sascha Mehlhase is a postdoc at the Niels Bohr Institute in Copenhagen. While his current physics interests focus mainly on silicon detectors, searches for stable massive particles (R-Hadrons) and the W-boson mass measurement, he spends a lot of his spare time on outreach activities (not just including plastic bricks).
You can find more information at http://sascha.mehlhase.info/