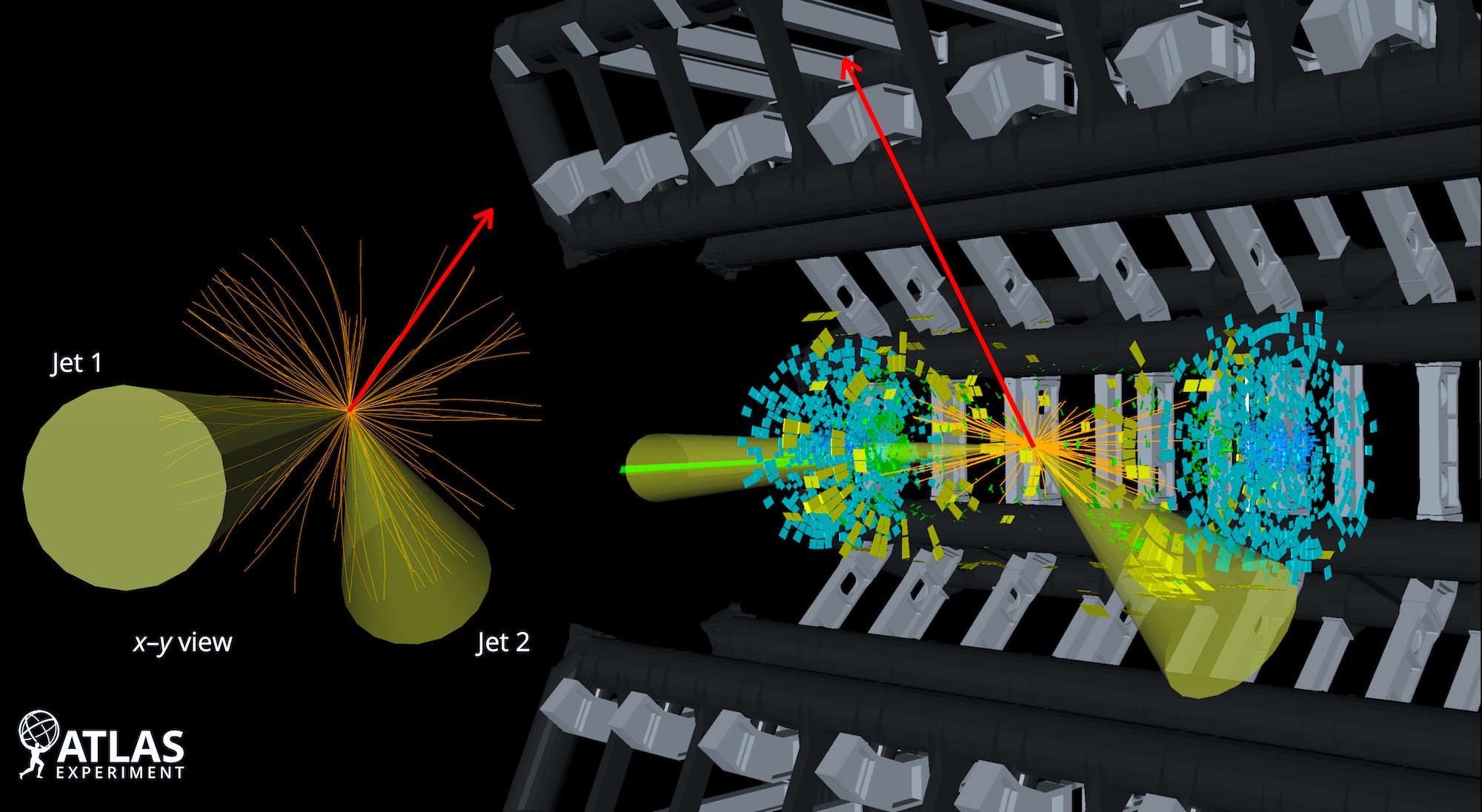 Looking for the invisible with the Higgs boson

What is dark matter? Since the 1970s, astronomers have observed that galaxies appear to be surrounded by vast halos of something that has mass and is affected by gravity, but is otherwise invisible. Though over 80% of the Universe's mass appears to be composed of this dark matter, its nature remains one of the major unsolved mysteries of physics. Theorists have proposed many possible explanations, including the existence of one or more new particles.

Spotting an imbalance of momentum wouldn’t, by itself, be enough. It would only mean that invisible particles were produced; these could be dark matter, or they could just be neutrinos. Further, physicists need to look at the rest of the collision to find evidence that it was a Higgs boson – and not some other particle – which decayed invisibly. In particular, the Z boson can decay to two neutrinos, and is produced much more frequently than the Higgs boson; distinguishing the two processes is an essential part of the analysis.

The ATLAS Collaboration’s latest search for invisible Higgs-boson decays looks for Higgs bosons produced via "vector boson fusion" (VBF). In a VBF event, two incoming particles interact by each emitting a W or Z boson, which then "fuse" together to create a Higgs boson. The two original particles then decay, creating “jets” of particles on either side of the detector. This distinctive signature can be seen in the event display above. While Z bosons can also be produced via VBF, this occurs at a lower rate, making VBF the most sensitive channel in which to look for invisible decays of the Higgs boson.

ATLAS' new result is highly competitive with direct searches for dark-matter particles, especially for those with a mass between 1 and 10 GeV.

The new result uses the full LHC Run-2 dataset (collected 2015-2018), examining over four times as much data as the last time this analysis was done. This result also includes significant improvements to the prediction of the Z-boson background, including the use of new state-of-the-art theory calculations to improve its accuracy. No evidence of this process was observed beyond the Standard Model prediction, which enabled physicists to set limits on the decay probability (branching ratio) that a Higgs boson might decay invisibly. This result rules out an invisible branching ratio above 15% at a 95% confidence level, which was used to set limits on the mass of various dark-matter particles that interact with the Higgs boson. As shown in Figure 2, these results are highly competitive with other experiments searching for direct evidence of dark matter, especially for dark-matter particles with mass between 1 and 10 GeV.

While physicists have yet to find evidence of the invisible Higgs-boson decay, the upper limit of 15% set by this analysis is still well above the Standard Model prediction of 0.1%. Additional data from the coming LHC Run 3 and Run 4 will shed needed light on this dark search.

About the event display: Candidate VBF event, with two visible jets (shown in yellow) on opposite sides of the detector, plus a large momentum imbalance (red) in the transverse plane, potentially from the decay of a Higgs boson to invisible particles. (Image: ATLAS Collaboration/CERN)