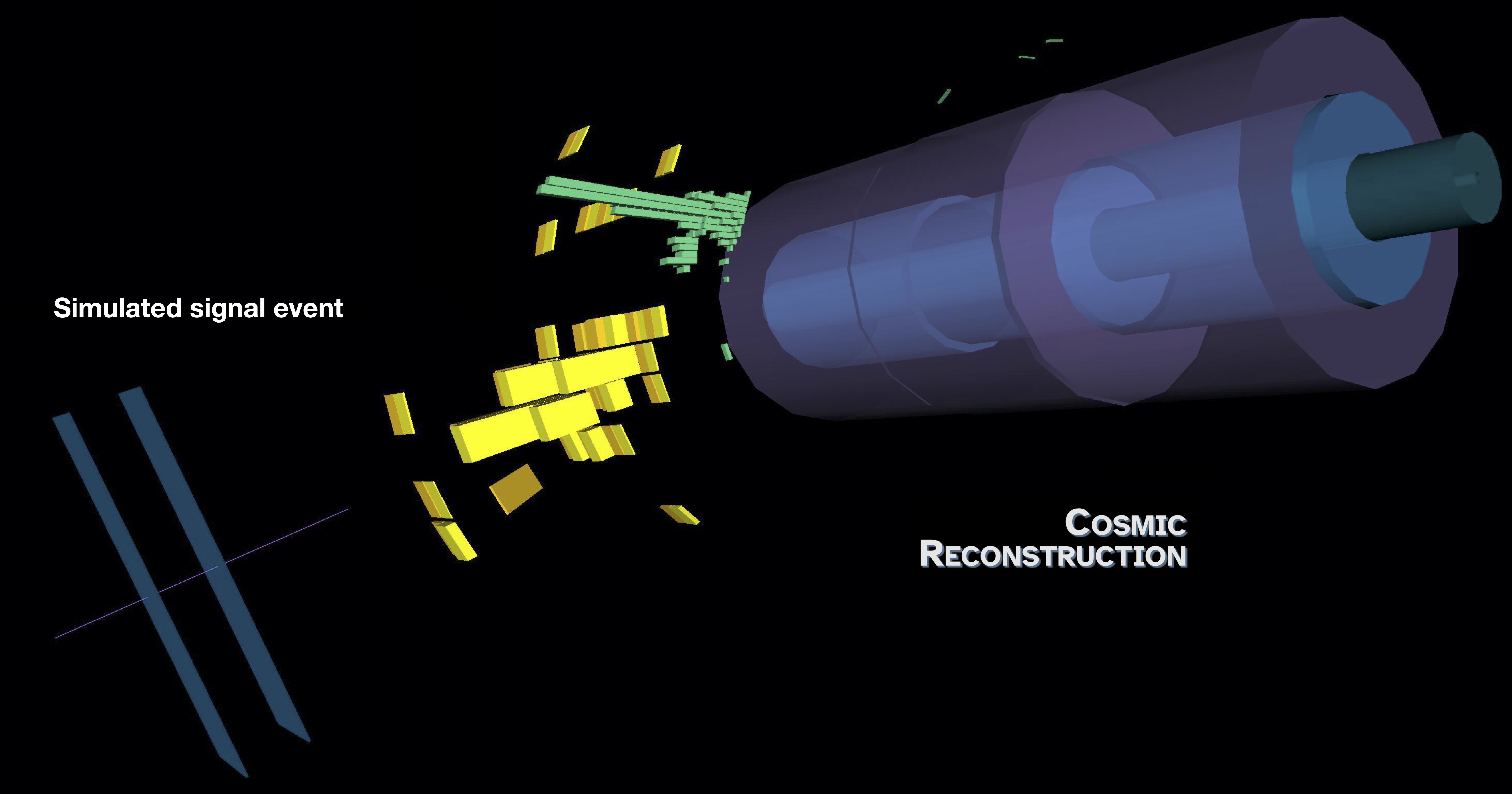 The search for elusive new particles is one of the primary aims of the ATLAS experiment and the LHC. When combined with the Standard Model of particle physics, such new particles could explain several outstanding mysteries about our Universe.

A new result from the ATLAS Collaboration – debuted at the virtual Moriond Electroweak conference – sets itself apart from more traditional LHC searches. Typically, physicists will look for new particles produced in LHC collisions that immediately decay to known or invisible particles. This analysis, in contrast, looks for new particles that live for roughly a hundred nanoseconds or more before decaying. These long-lived particles (LLPs) live long enough to travel large distances, well into the ATLAS detector itself.

If these new particles interact with matter, some fraction of them may lose their momentum and come to rest inside the densely instrumented regions of the detector. LLPs that have stopped in the detector may then decay at some later time – should these decays happen when no significant signal is expected in the detector, they would leave a striking experimental signature as seen in the event display above.

ATLAS' new search for long-lived particles analyses data taken during “empty bunch crossings” – time intervals in which no proton collisions are expected from the LHC.

In order to take advantage of this unconventional scenario, and to reduce possible background effects, ATLAS researchers avoided collision data altogether! Their new analysis looks for energetic sprays of hadrons entering the calorimeter systems of the ATLAS detector during “empty bunch crossings” – time intervals in which no proton collisions are expected from the LHC.

Searching for new phenomena in this “late” dataset leads to a unique style of data analysis. Unlike most new-physics searches – which have to sift through background Standard Model processes from proton collisions – the expected background contributions for this search originate from far outside the detector. These could be from upstream interactions of the LHC beams or from cosmic-ray muons raining down from above injecting energetic particles into the detector. Combatting such background sources required dedicated mitigation techniques.

The non-standard nature of the signature even complicated its simulation, requiring dedicated tools to be built at every stage of the process. Such simulations are the benchmark against which measured data is compared, and indicate whether ATLAS has spotted something new. The signal benchmark used in this search is inspired by “mini-split” supersymmetry models, where a large mass difference between supersymmetric particles induces a large lifetime for the gluino (the gluon’s supersymmetric partner), which would be abundantly produced in LHC collisions. This gluino, if it exists, would interact with the strong nuclear force and form a composite state called an R-hadron. The interactions of this R-hadron with the detector would be complex. To enable its search, physicists developed a sophisticated model describing the R-hadron’s production, propagation and decay.

ATLAS’ new search found agreement with the expected backgrounds and saw no evidence for new phenomena. Gluino mass exclusions, shown in Figure 1, have been set by this search for an enormous range of particle lifetimes – from 100 ns all the way to more than 3 years. Depending on the details of the signal model, the search excludes gluinos up to masses of 1.4 TeV for a large range of lifetimes.

These results represent a major increase in sensitivity from the previous ATLAS search from 2013 and involved a detailed overhaul of every aspect of the search. No evidence for these hypothesised late decays was found, and so the ATLAS Collaboration continues its hunt for new physics that may still be hiding in the data.

About the event display: A simulated LLP decay as it would be seen by the ATLAS detector, featuring an energetic spray of hadrons originating from the calorimeter system in an event with no proton-proton collision. Energy deposits in the calorimeter system are shown in green and yellow. (Image: ATLAS Collaboration/CERN)