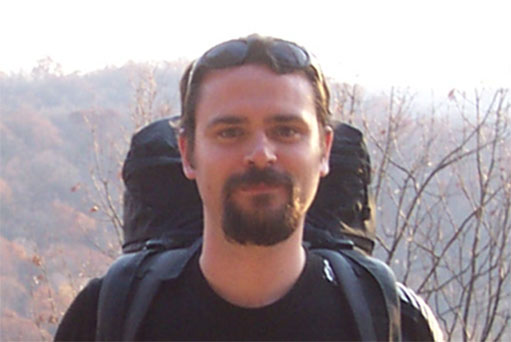 Going into his new position with Johannesburg's University of the Witwatersrand ('Wits' for short), Trevor Vickey sees his brief as “a sort of linear combination between a professorship and a Peace Corps assignment”. The tenure-track Senior Lecturer post will take him to a brand new continent, but, he says, he made the original application “on a whim” after five years as an ATLAS postdoc.

“I thought South Africa would be a cool place to live,” he smiles. “And I liked that there was a lot of young blood in the department, people were very friendly, and there have been some very good students there, like Stanley Mandelstam and Saul Teukolsky.”

Trevor is hoping to be instrumental in bringing about change at his new institute, and the first step – getting Wits officially onto ATLAS as part of a South African cluster with the University of Johannesburg – is already in progress. He started his new job in January, and in February, he co-wrote the cluster's formal Expression of Interest letter to join ATLAS. The Collaboration is due to vote on whether to accept South Africa at ATLAS Week in Copenhagen later this month.

On the ground, when he moves to Johannesburg in early July, he expects to be doing a lot of intensive one-on-one work with disadvantaged students who aren't quite prepared for calculus-based physics courses.

“I think that you can really change some of the students' lives,” he says. “It's pretty obvious, the gap between the rich and the poor. You fly in and you see people living in these tin shacks and then you see people driving Ferraris around. It's still a developing country, so even on the campus you can make changes very fast. Anything that you do, you will see have an impact.”

The move also brings he and his wife Oana together on the same experiment for the first time, although they are already responsible for what he terms “the first combined result from ATLAS and CMS” – their son, Alex, now aged two.

Before their five-year postdoc stints at CERN, he and Oana – who met at the SLAC Summer Institute in 2001 – were based on CDF and OPAL respectively during their PhDs. He was studying in his home state of Illinois (at the University of Illinois), and she was studying in Freiburg, until she moved to Chicago for experimental work on D0. When he found out that there were some retirements coming up in his new department at Wits, Trevor says, in classic physicist speak, “I saw a possibility of solving this complicated two-body problem.”

His excitement at this new horizon is evident, and not just from an academic point of view. “We’ve talked about going from Johannesburg, up the coast of Africa to Egypt. I like to go camping, hiking, mountaineering, that sort of thing. It'd be great to go to Madagascar, Namibia, Botswana, Mozambique … and I'm looking forward to going to the National Parks.”

One of the first of those visits will take place in December, when he is s co-organising the “Discovery Physics at the LHC” workshop on the border of Kruger National Park. “It's one of the largest in the world actually,” he grins, “it's like the size of Israel.”

At ATLAS, Trevor busies himself with the SCT and Higgs searches.“Mostly stuff to taus,” he ponders. “Anything to taus!” Originally he focussed on Standard Model Higgs to tau-tau, but with the expected lower centre-of-mass energy and smaller datasets for the next couple of years, he has begun looking further afield to more exotic models.

While South Africa is not (yet) a part of the ATLAS Collaboration, Trevor is affiliated with Oxford University, where he holds a Visiting Lecturer position. Hopefully, the ATLAS week will bring good news for him and his South African colleagues, and the new phase of his life will begin.

But he doesn't intend to stray from Geneva for too long. He and Oana will keep hold of their house in France, and he plans to be back for ATLAS Weeks and shifter duties, as well as routinely spending the whole of the Southern Hemisphere summer (December to February) at CERN.

“I can shift my teaching duties around too,” he smiles. “so I think that with this early data-taking period, I'll definitely try to be here quite a bit.”