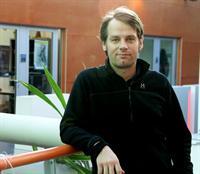 Sascha Caron is a particle physicist and has worked for the ATLAS experiment since the beginning of 2006. He was a member of the DØ experiment at Fermilab (Chicago) between 2004 and 2006 and a member of the H1 experiment at DESY (in Hamburg) between 1998 and 2004. Together with his group he tries to discover signals of new physics - e.g. physics beyond our current theory of the microscopic world (the so called Standard Model). His group also applies advanced data science methods to problems in astroparticle physics, astrophysics and theory.

String Theory predicts a new symmetry, called "supersymmetry", that could shed light on some of today's mysteries of fundamental particles and interactions. In supersymmetry, every particle-type should have a "shadow" particle called a super-partner that (in general) has a much higher mass. The ATLAS Experiment has analyzed the first year of its LHC data and searched for evidence of these super-partners of ordinary matter.