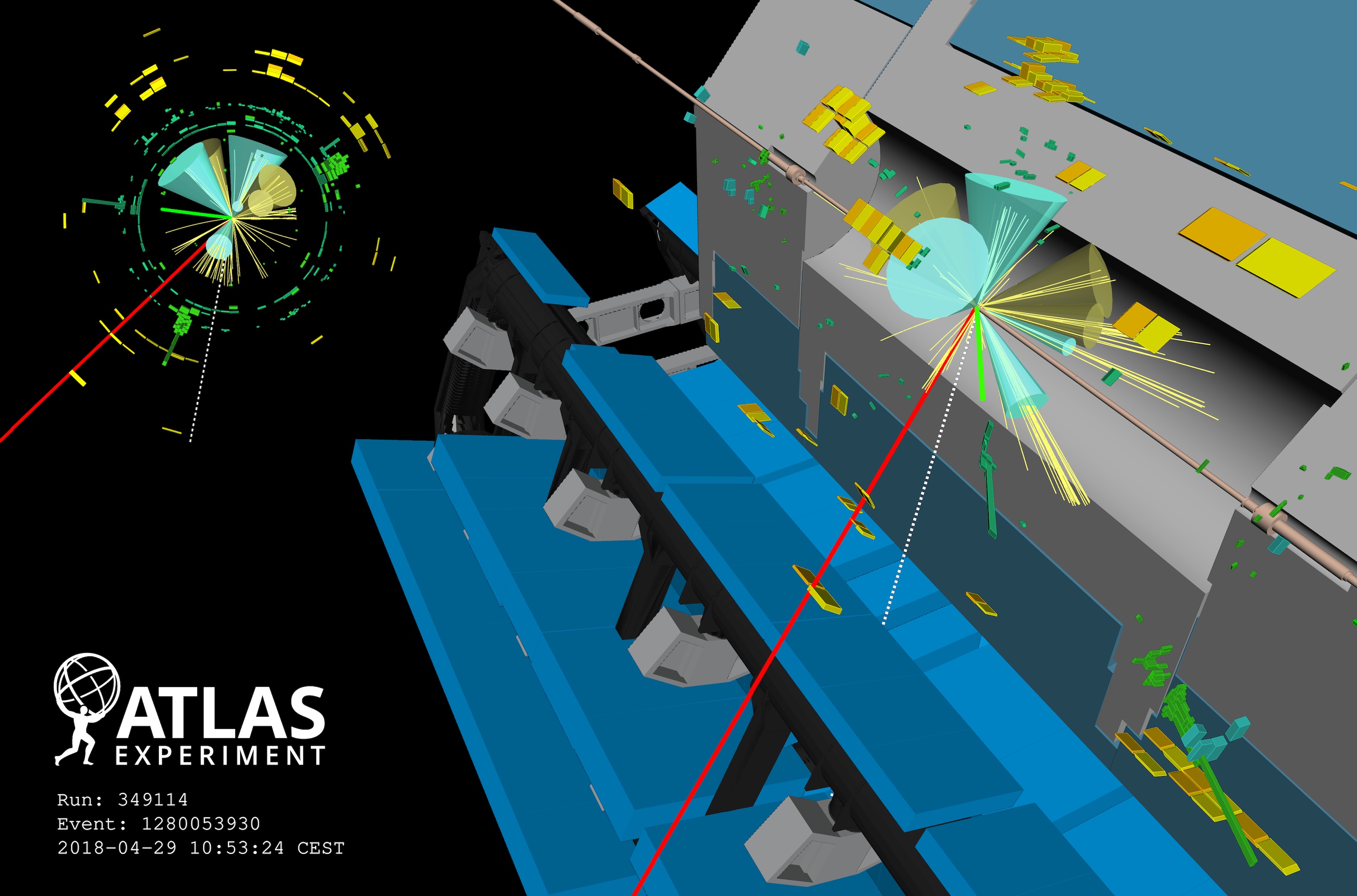 In a new result released today, the ATLAS Collaboration announced strong evidence of the production of four top quarks. This rare Standard Model process is expected to occur only once for every 70 thousand pairs of top quarks created at the LHC and has proven extremely difficult to measure.

The top quark is the most massive elementary particle in the Standard Model, clocking in at 173 GeV, which is equivalent to the mass of a gold atom. But contrary to gold, whose mass is mostly due to the nuclear binding force, the top quark gets all its mass from the interaction with the Higgs field. So when four top quarks are produced in a single event, they create the heaviest particle final state ever seen at the LHC, with almost 700 GeV in total. This is an ideal environment to search for new physics with yet unknown particles contributing to the process. Should they exist, physicists will see additional production of four top quarks above what is predicted by the Standard Model, further motivating a detailed study of the process.

In this new search for four-top-quark production, ATLAS physicists studied the full Run 2 dataset recorded between 2015 and 2018. When produced through proton–proton collisions at the LHC, this process leaves spectacular signatures in the ATLAS detector. The four top quarks produce four W bosons and four jets – collimated sprays of particles – originating from bottom quarks. The W bosons then, in turn, each decay into two jets or one charged lepton (electron, muon or tau leptons) and an invisible neutrino. As a final step, the tau leptons decay into a lighter lepton or a jet, with additional neutrinos.

For this result, physicists chose to focus on collision events producing two leptons with the same charge or three leptons. Despite accounting for only 12% of all four-top-quark decays, these signatures are easier to distinguish from background processes in the ATLAS detector. Detecting a signal nevertheless required a detailed understanding of the remaining background processes and the use of sophisticated separation techniques.

When four top quarks are produced in a single event, they create the heaviest particle final state ever seen at the LHC, with almost 700 GeV in total.

ATLAS physicists trained a multivariate discriminant (boosted decision tree) using the distinct features of the signal, including the high numbers of jets, their quark-flavour origin (bottom quark or not), and the energies and angular distributions of the measured particles. The main background processes that resemble the signal stem from the production of a pair of top quarks in association with other particles, such as a W or Z boson, a Higgs boson, or another top quark. Some of these processes have themselves only recently been observed by the ATLAS and CMS Collaborations.

Each background process was individually evaluated, primarily through dedicated simulations which included information from the best available theoretical predictions. The most difficult background processes – the top-quark-pair production with a W boson and backgrounds with fake leptons – had to be determined using data from dedicated control regions. Fake leptons arise when the charge of a lepton is misidentified, or when leptons come from a different process, but are attributed to the signal. Both had to be well-understood and precisely evaluated in order to reduce the systematic uncertainty on the final result.

Additional data from the next LHC run – along with further developments of the analysis techniques employed – will improve the precision of this challenging measurement.