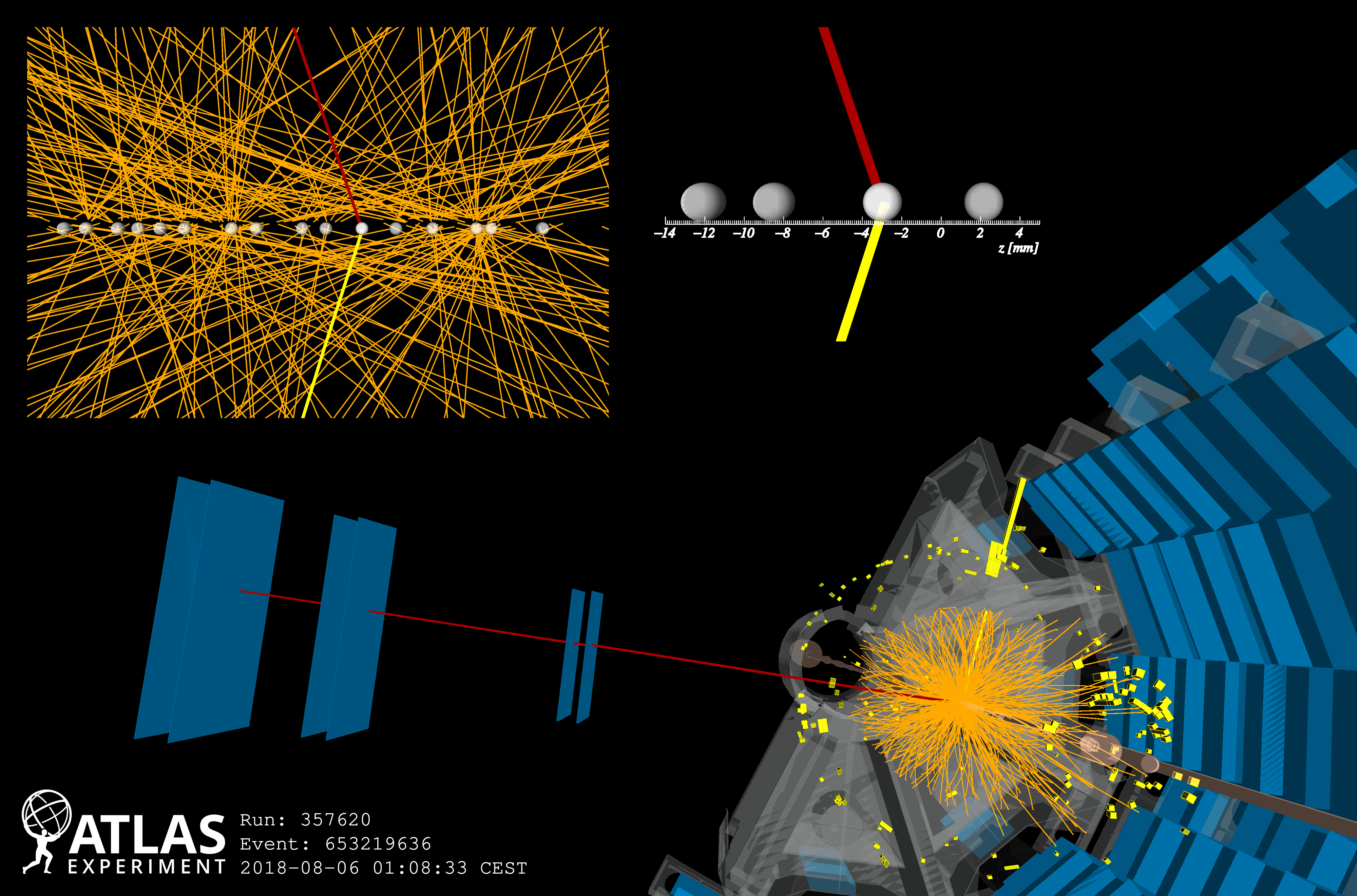 During the International Conference on High-Energy Physics (ICHEP 2020), the ATLAS collaboration presented the first observation of photon collisions producing pairs of W bosons, elementary particles that carry the weak force, one of the four fundamental forces. The result demonstrates a new way of using the LHC, namely as a high-energy photon collider directly probing electroweak interactions. It confirms one of the main predictions of electroweak theory – that force carriers can interact with themselves – and provides new ways to probe it.

According to the laws of classical electrodynamics, two intersecting light beams would not deflect, absorb or disrupt one another. However, effects of quantum electrodynamics (QED), the theory that explains how light and matter interact, allow interactions among photons.

Indeed, it is not the first time that photons interacting at high energies have been studied at the LHC. For instance, light-by-light “scattering”, where a pair of photons interact by producing another pair of photons, is one of the oldest predictions of QED. The first direct evidence of light-by-light scattering was reported by ATLAS in 2017, exploiting the strong electromagnetic fields surrounding lead ions in high-energy lead–lead collisions. In 2019 and 2020, ATLAS further studied this process by measuring its properties.

The new result reported at this conference is sensitive to another rare phenomenon in which two photons interact to produce two W bosons of opposite electric charge via (among others) the interaction of four force carriers[1]. Quasi-real photons from the proton beams scatter off one another to produce a pair of W bosons. A first study of this phenomenon was previously reported by ATLAS and CMS in 2016, from data recorded during LHC Run 1, but a larger dataset was required to unambiguously observe it.

The ATLAS Collaboration reports the observation of photon collisions producing weak-force carriers and provides further insights into their interactions.

The observation was obtained with a highly significant statistical evidence of 8.4 standard deviations, corresponding to a negligible chance of being due to a statistical fluctuation. ATLAS physicists used a considerably larger dataset taken during Run 2, the four-year data collection in the LHC that ended in 2018, and developed a customised analysis method.

Owing to the nature of the interaction process, the only particle tracks visible in the central detector are the decay products of the two W bosons, an electron and a muon with opposite electric charge. W-boson pairs can also be directly produced from interactions between quarks and gluons in the colliding protons considerably more often than from photon–photon interactions, but these are accompanied by additional tracks from strong interaction processes. This means that the ATLAS physicists had to carefully disentangle collision tracks to observe this rare phenomenon.

“This observation opens up a new facet of experimental exploration at the LHC using photons in the initial state,” said Karl Jakobs, Spokesperson of the ATLAS Collaboration. “It is unique as it only involves couplings among electroweak force carriers in the strong-interaction dominated environment of the LHC. With larger future datasets it can be used to probe in a clean way the electroweak gauge structure and possible contributions of new physics.”

Indeed, the new result confirms one of the main predictions of electroweak theory, namely that, besides interacting with ordinary particles of matter, the force carriers, also known as gauge bosons – the W bosons, the Z boson and the photon – are also interacting with each other. Photon collisions will provide a new way to test the Standard Model and to probe for new physics, which is necessary for a better understanding of our Universe.