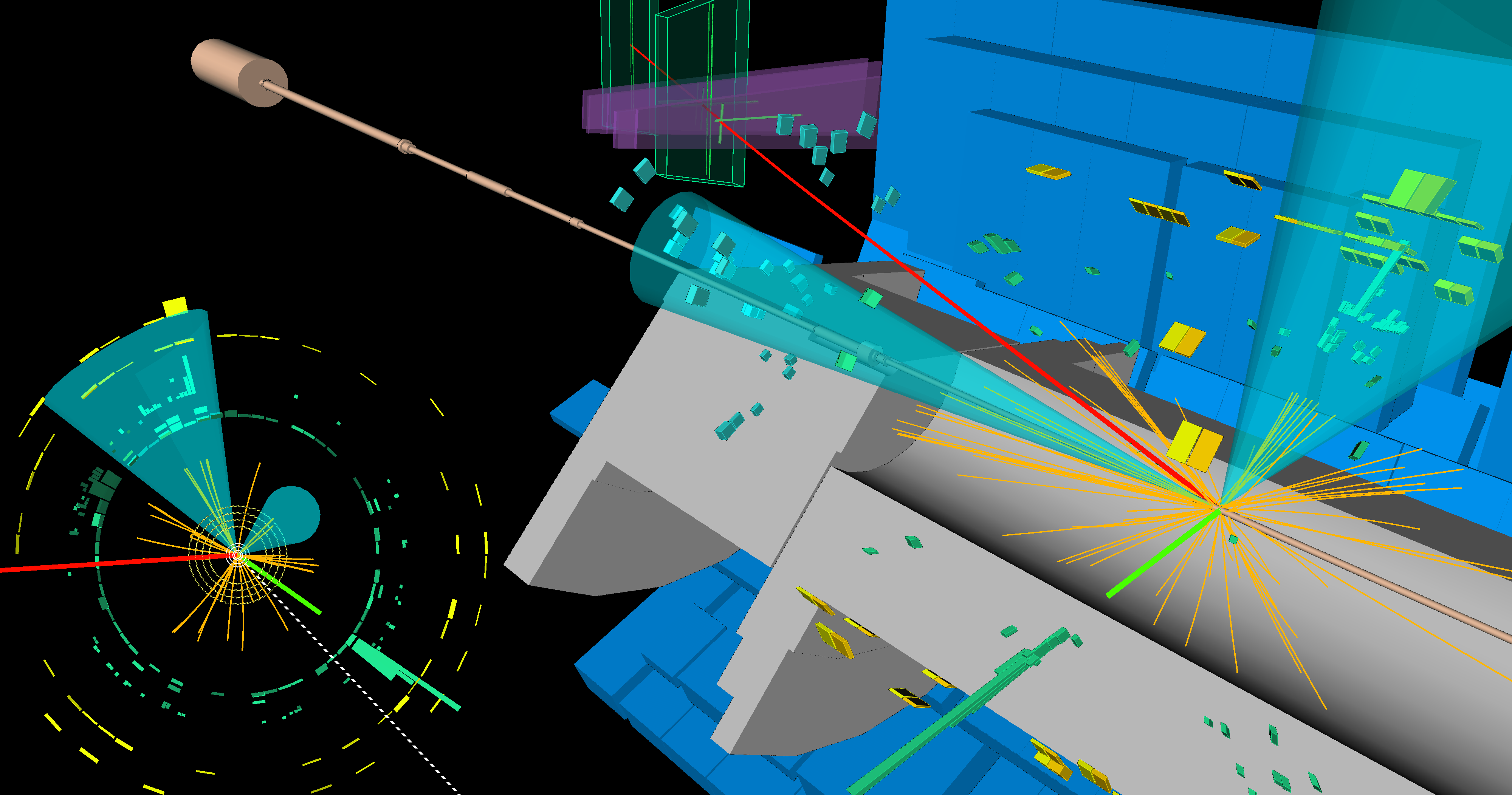 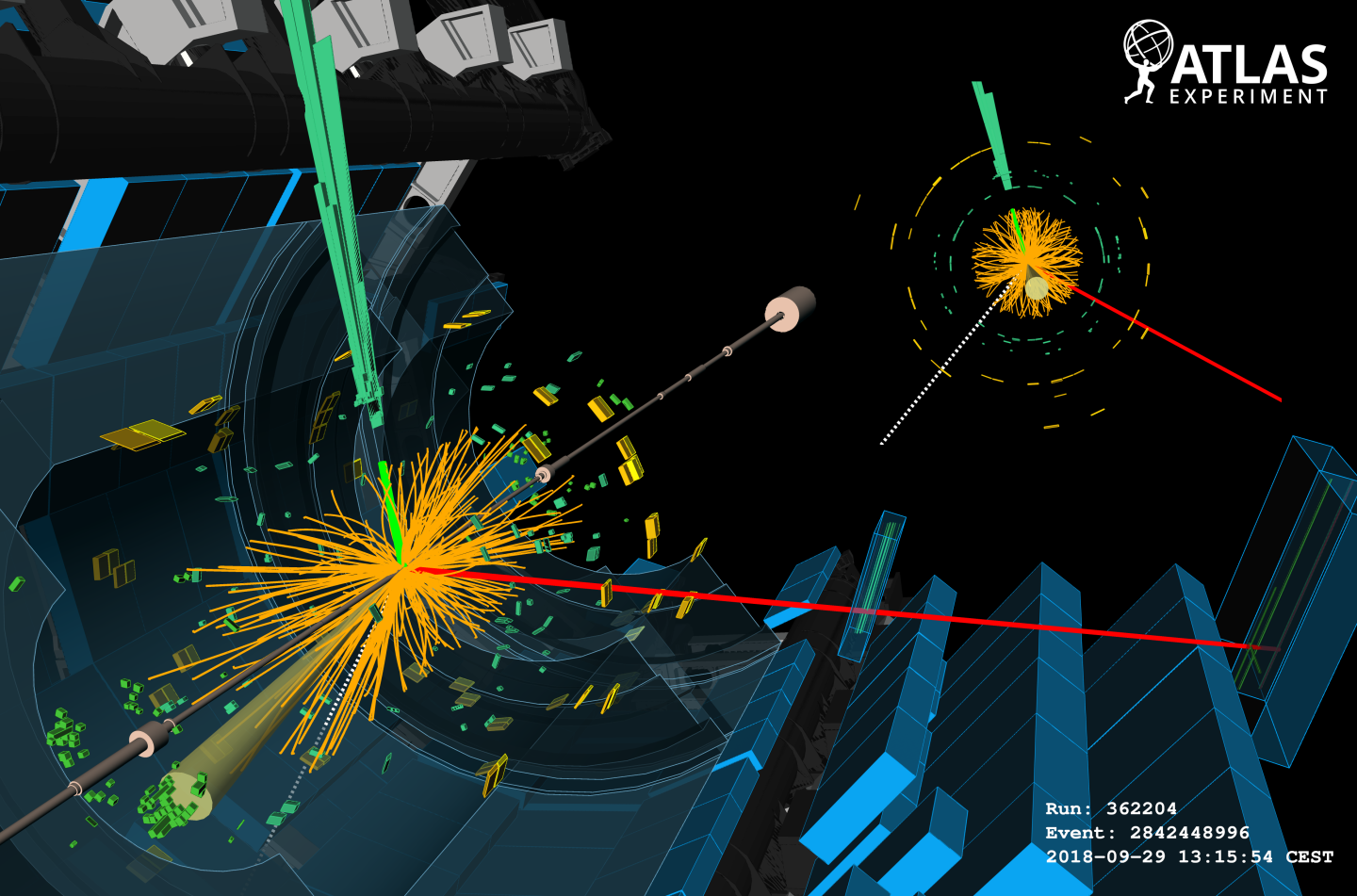 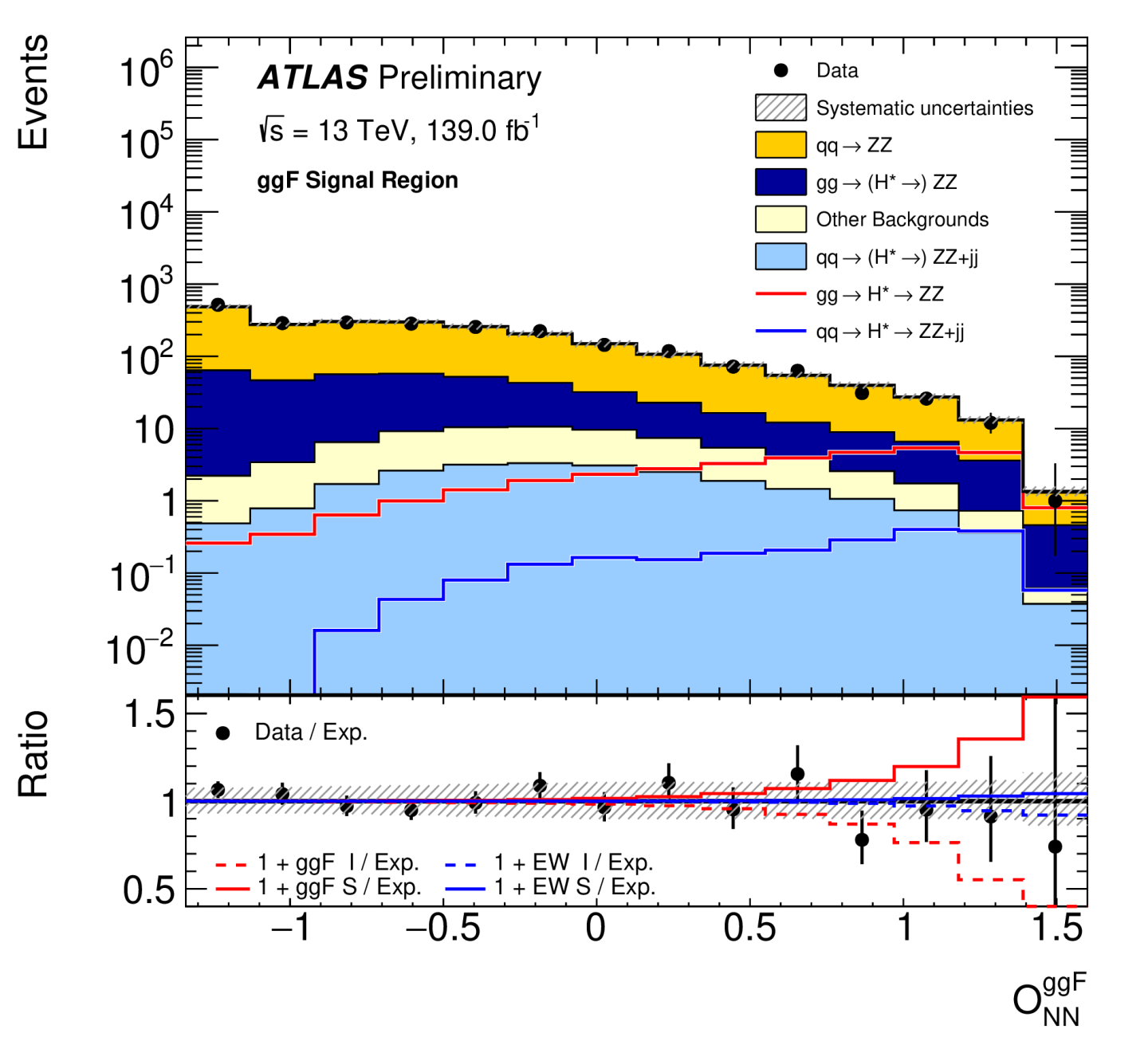 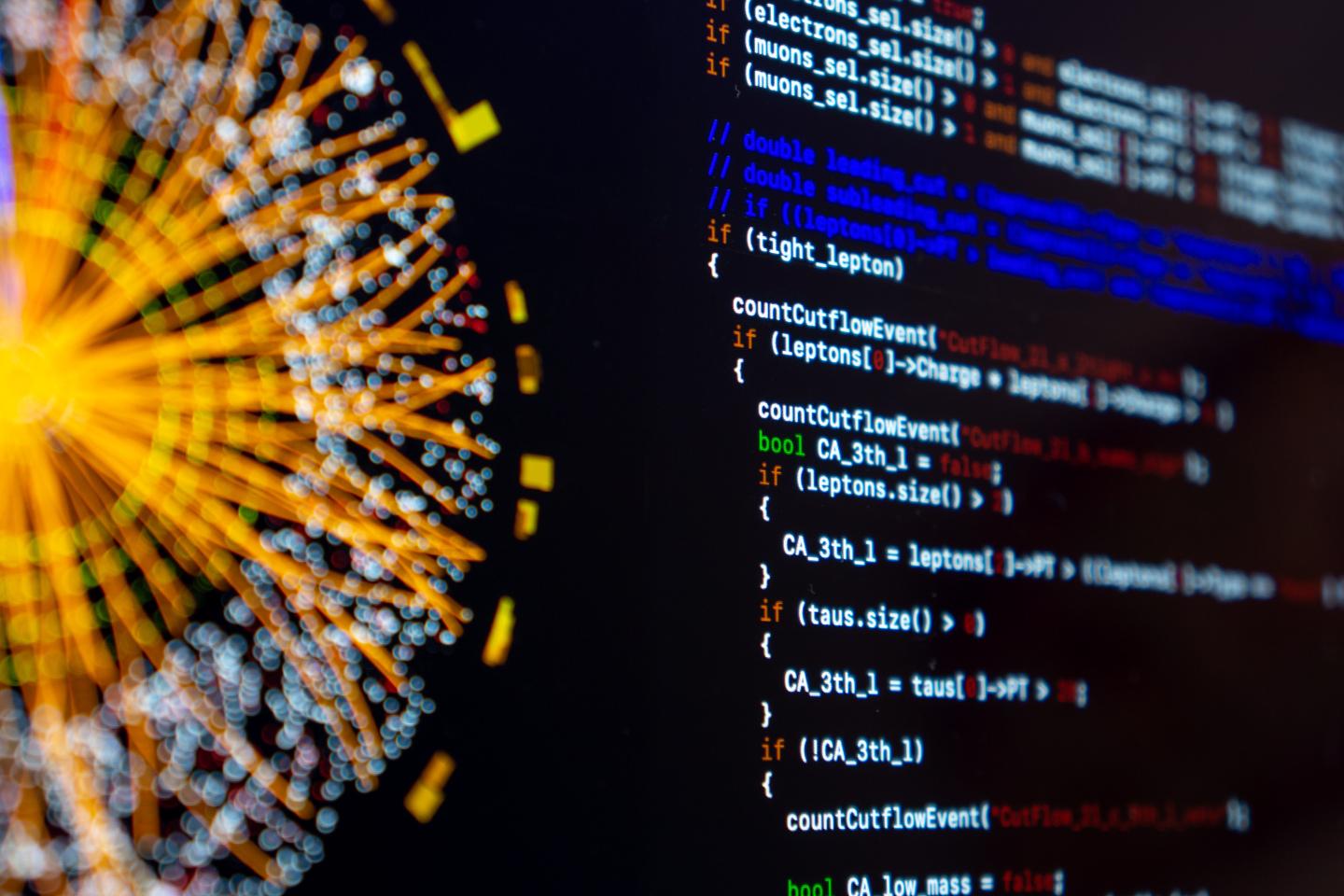 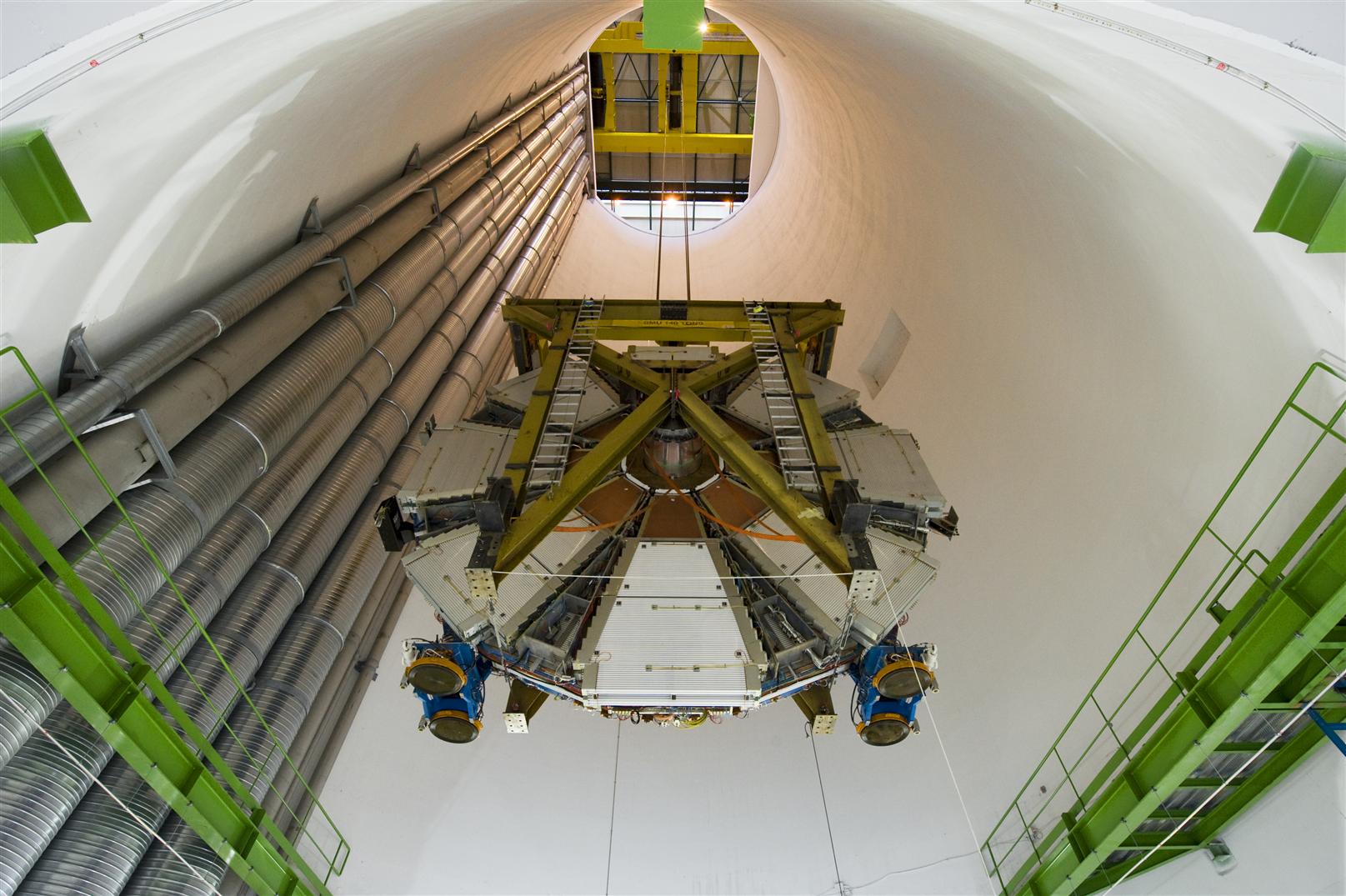 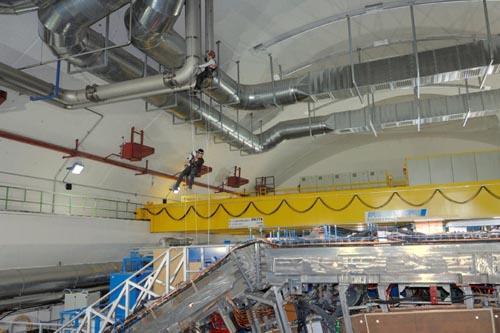 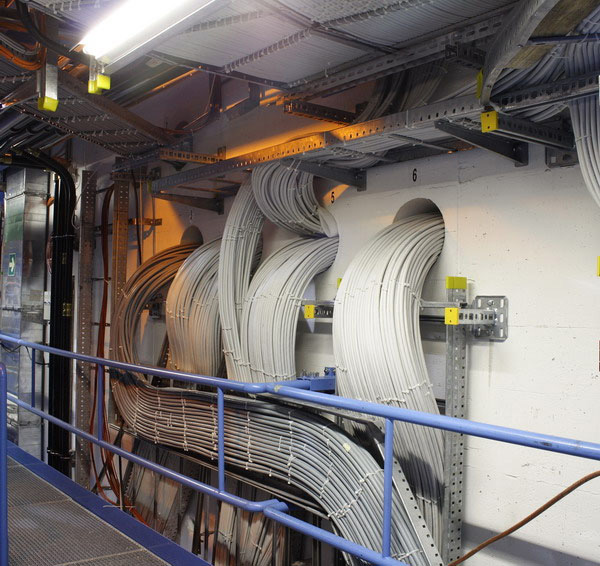 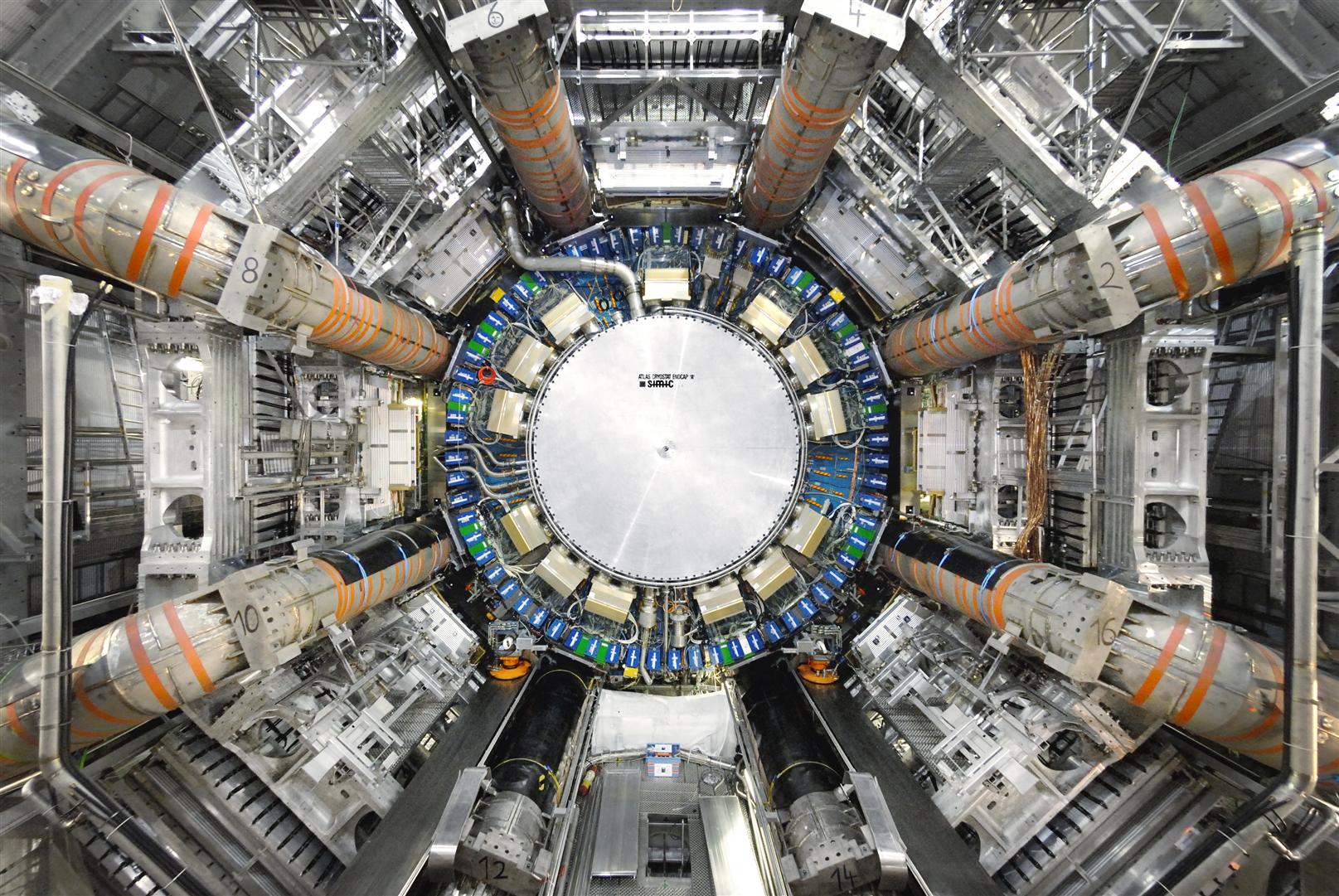 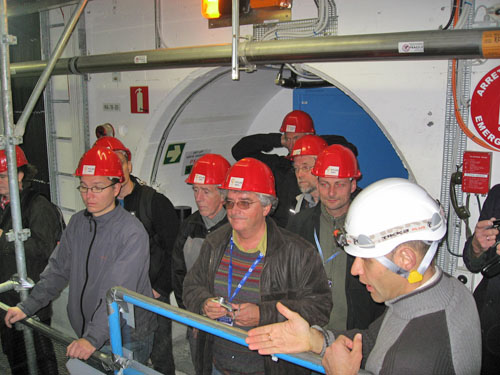 "It's amazing that you have to build something so huge to measure such extremely small things," said Tom Christiansen from Telemark in Norway, after visiting the ATLAS cavern. His sentiment about the size of the ATLAS detector was shared by the thirty–one other physics teachers who, together with Tom, attended the first Norwegian Teacher Programme run at CERN, in November 2007. 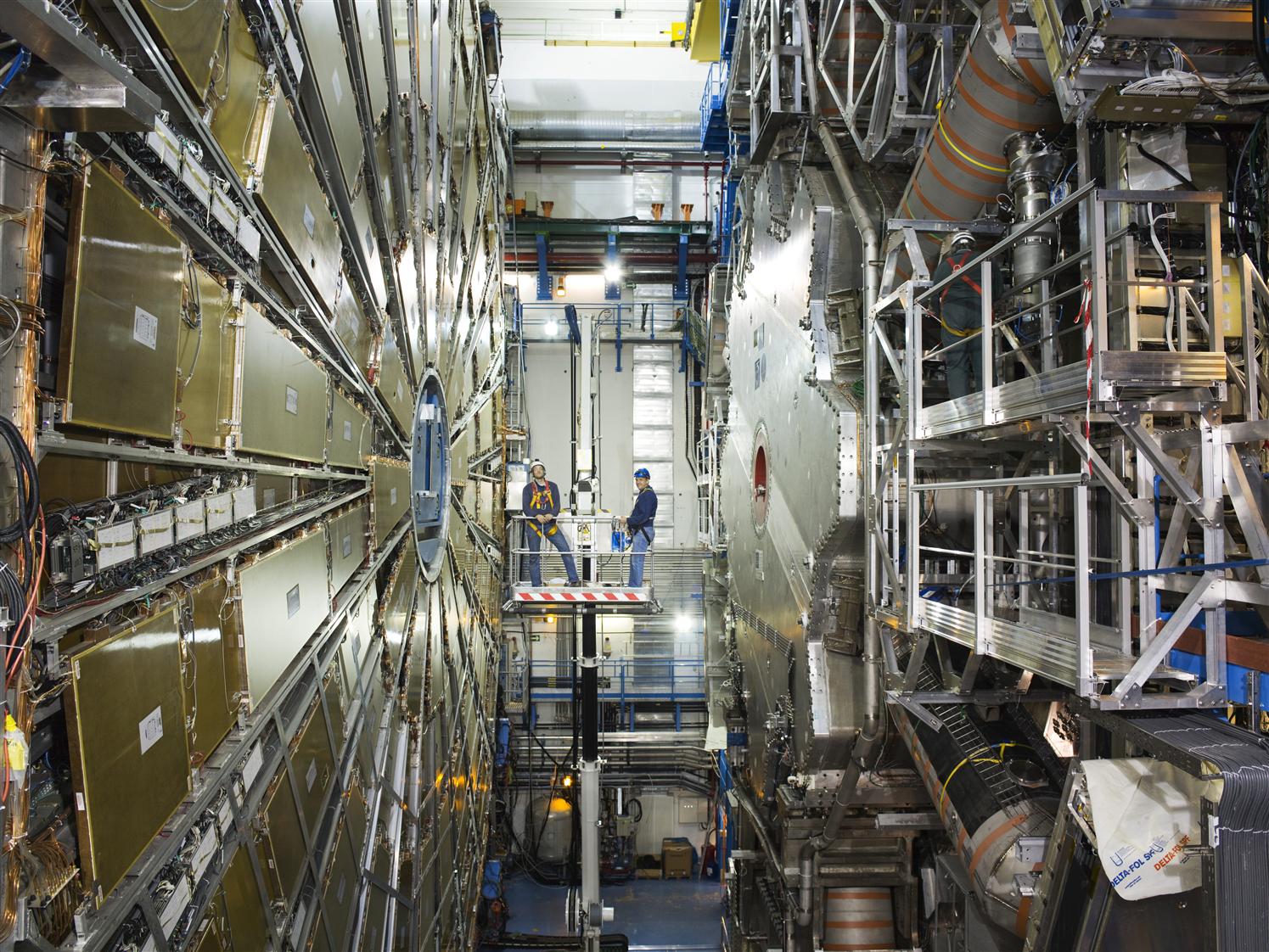 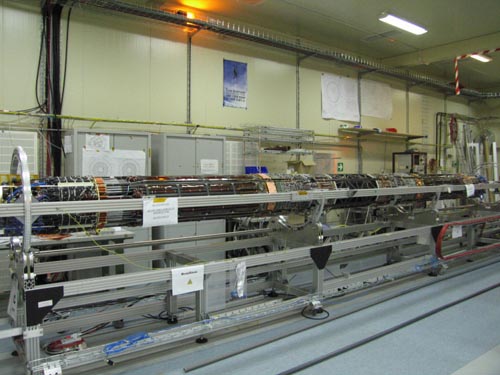 The pixels find their way to the heart of ATLAS

Leading up to the lowering of the pixel detector into the ATLAS cavern, final preparations were proceeding quickly. 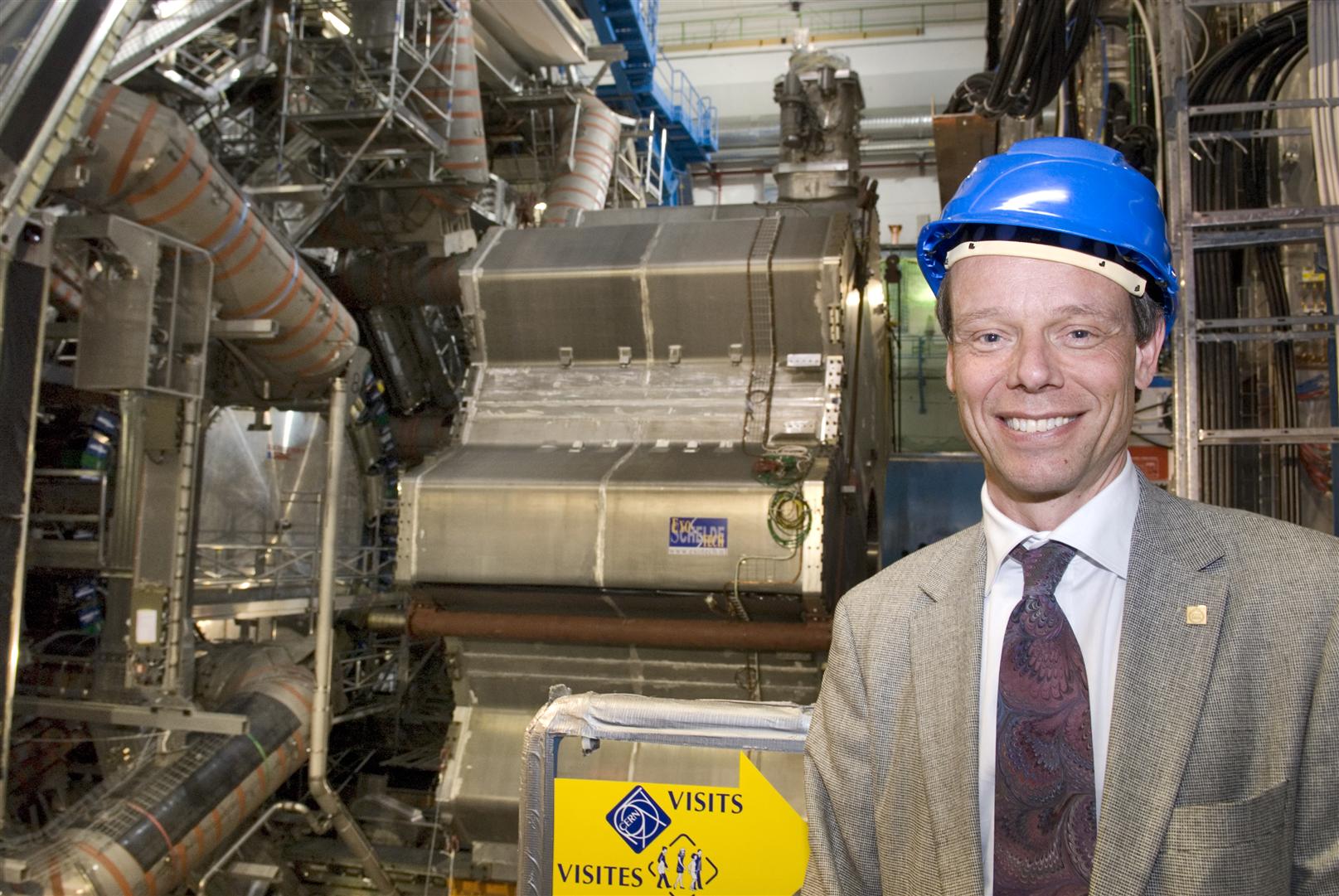 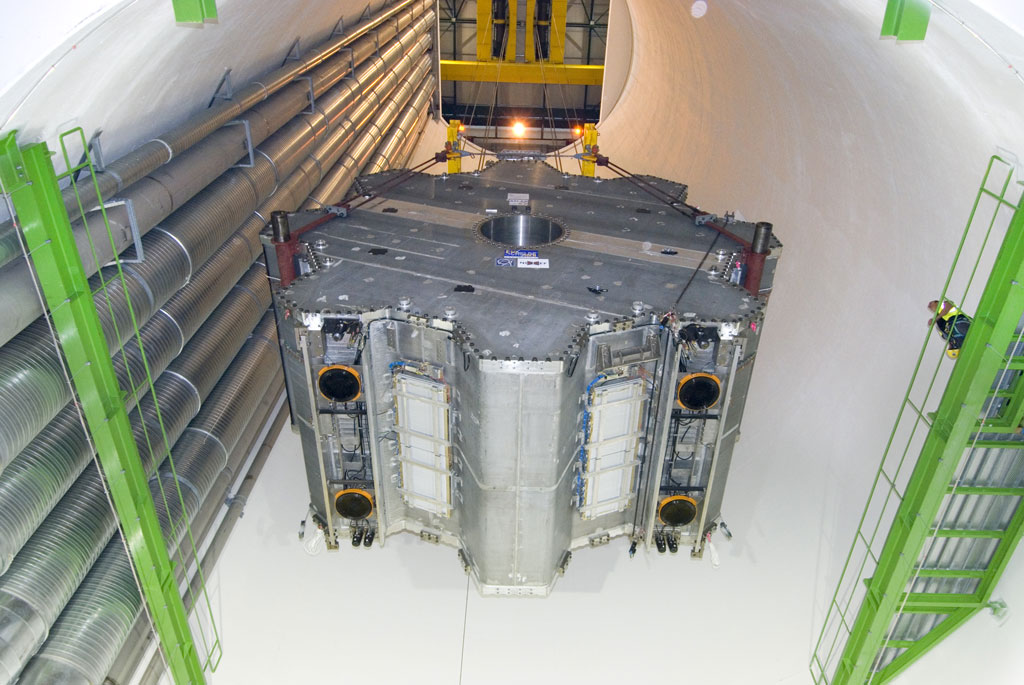 On 13 June 2007 the first of two giant toroid magnet end-caps was lowered into the ATLAS cavern on the A side. This complex and spectacular operation was completely successful. 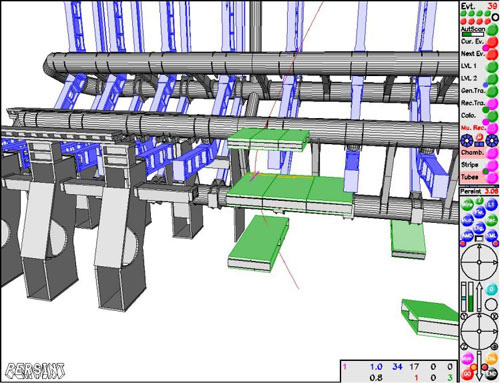 Data have recently been collected with the toroidal magnetic field will provide for the first time the measurement of the cosmic ray muons' momenta in the ATLAS experiment and allow studies on trigger optimization, chamber calibration, chamber alignment and magnetic field maps. More than one million events were acquired. They are now being analyzed by enthusiastic members of the collaboration. 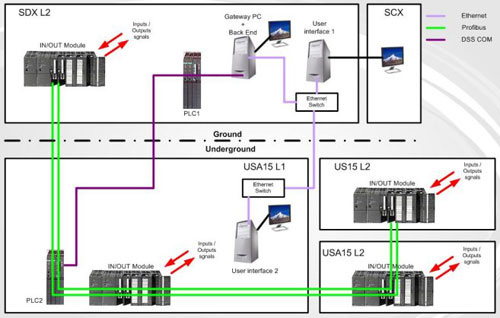 The ATLAS Detector safety system (DSS) has the mandate to put the detector in a safe state in case an abnormal situation arises which could be potentially dangerous for the detector. It covers the CERN alarm severity levels 1 and 2, which address serious risks for the equipment. 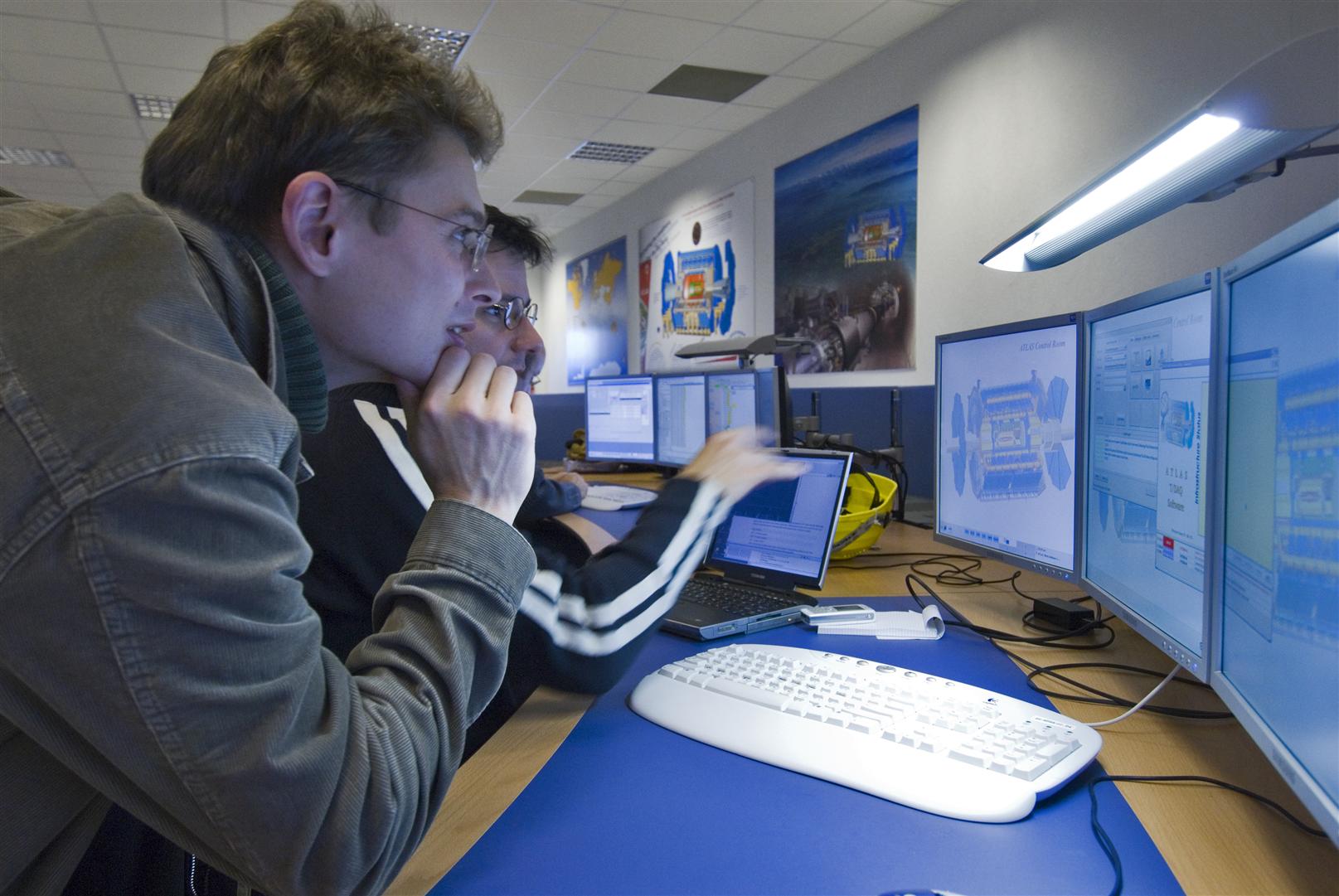 Development of the ATLAS control room

The ATLAS control room will become the brain of the detector operations. At the moment six of the final fifteen stations are already in place. 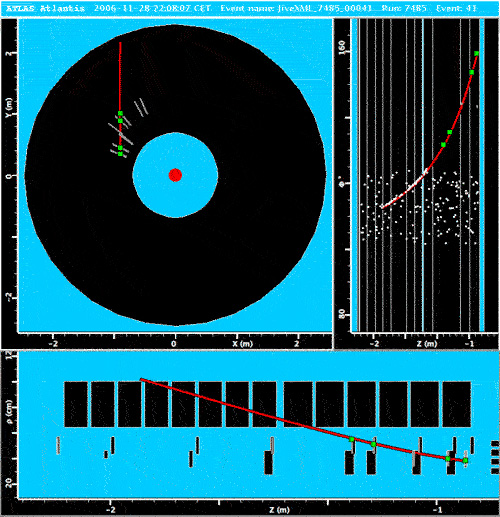 Following the successful combined SCT/TRT barrel test in the Spring 2006, a similar combined SCT/TRT endcap test is currently being performed in the SR1 building on the ATLAS experimental site at CERN. One quadrant of the SCT and two sectors of the TRT have been cabled up and are used in this test. The data taking and combined testing is expected to last until December 11th. 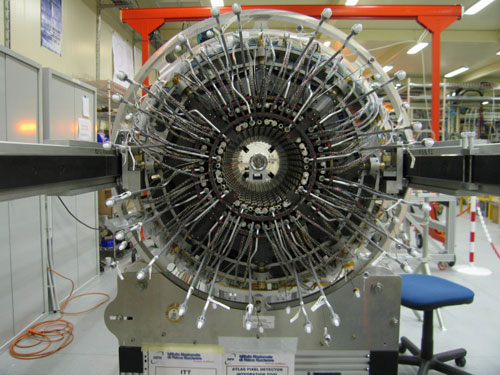 The pixels system: last but not late!

After almost 15 years of R&D and prototyping, the ATLAS pixel detector is finally almost ready for installation in ATLAS, and its first rendez-vous with colliding beams! 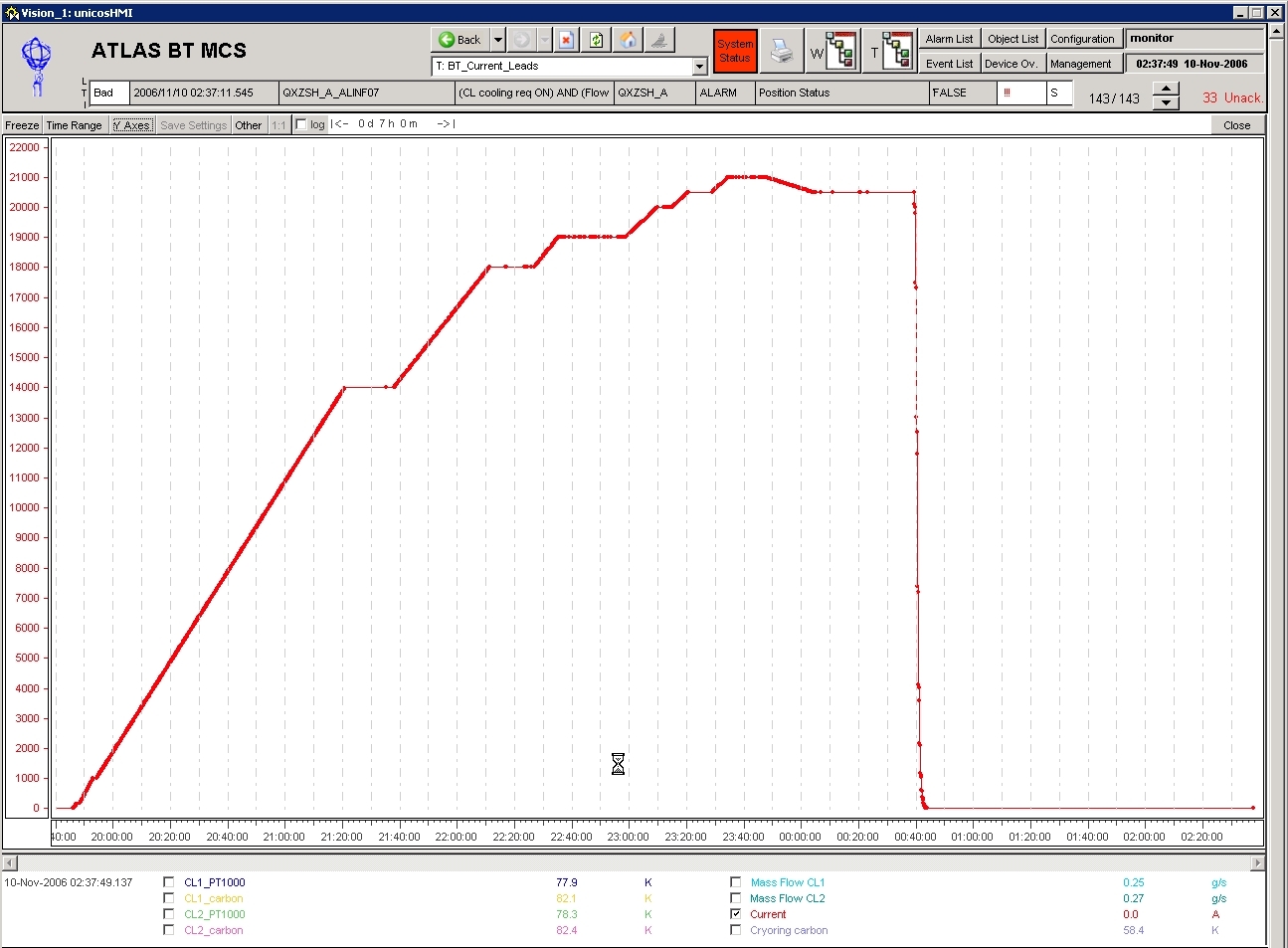 After a few weeks of testing up to intermediate currents, finally, on Thursday evening November 9, the current in the Barrel Toroid was pushed up to its nominal value of 20500 A and even 500 A beyond this value to prove that we have some margin. It went surprisingly well. 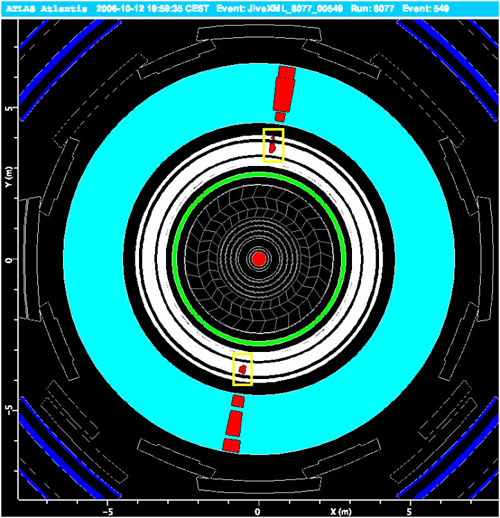 The electromagnetic barrel calorimeter was installed in its final position in October 2005. Since then, the calorimeter is being equipped with front-end electronics. Starting in April 2006, electronics calibration runs are taken a few times per week to debug the electronics and to study the performance in the pit (stability, noise). Today, 10 out of the 32 Front End crates are being read out, amounting to about 35000 channels. 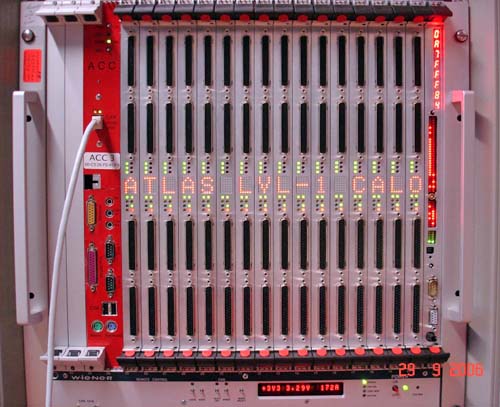 ATLAS copies its first PetaByte out of CERN

On 6th August ATLAS reached a major milestone for its Distributed Data Management project - copying its first PetaByte (1015 Bytes) of data out from CERN to computing centers around the world. This achievement is part of the so-called 'Tier-0 exercise' running since 19th June, where simulated fake data is used to exercise the expected data flow within the CERN computing centre and out over the Grid to the Tier-1 computing centers as would happen during the real data taking. 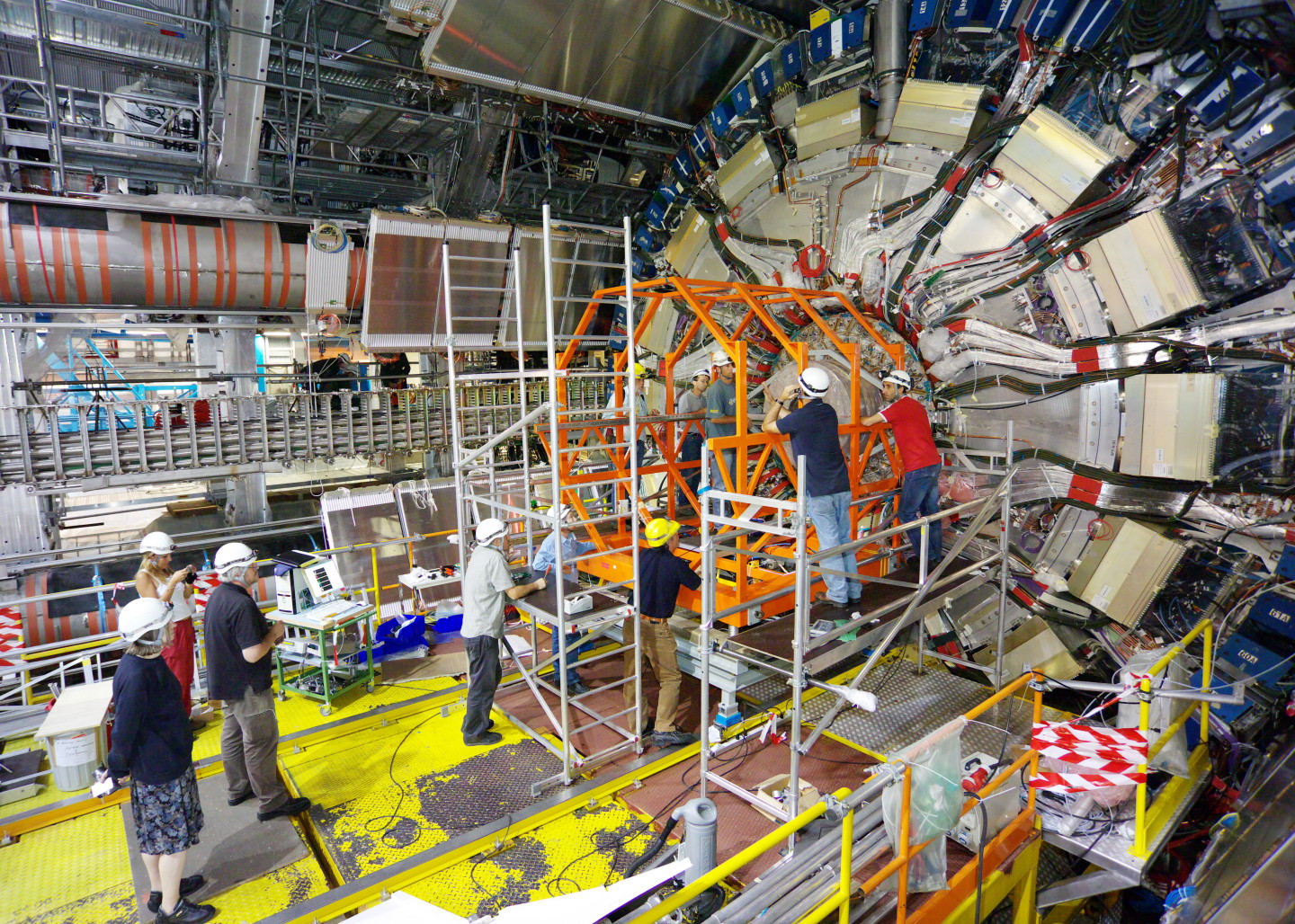 Wednesday 23rd August was a memorable day for the Inner Detector community as they witnessed the transport and installation of the central part of the inner detector (ID-barrel) into the ATLAS detector. 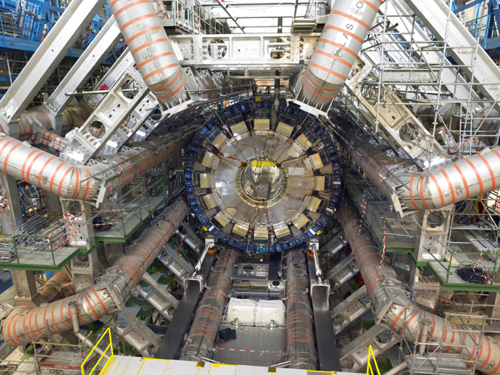 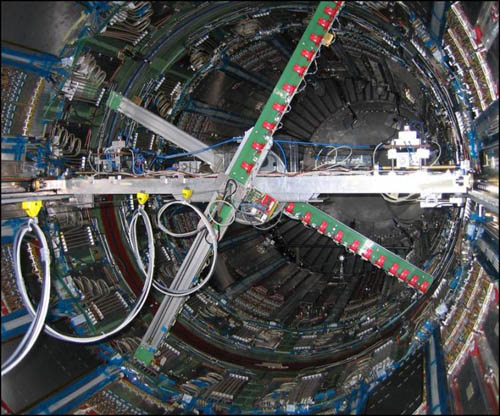 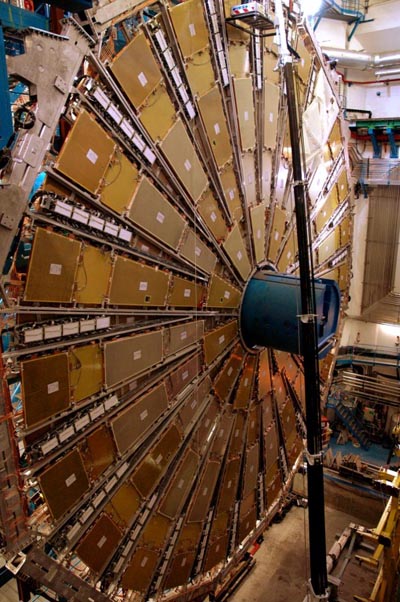 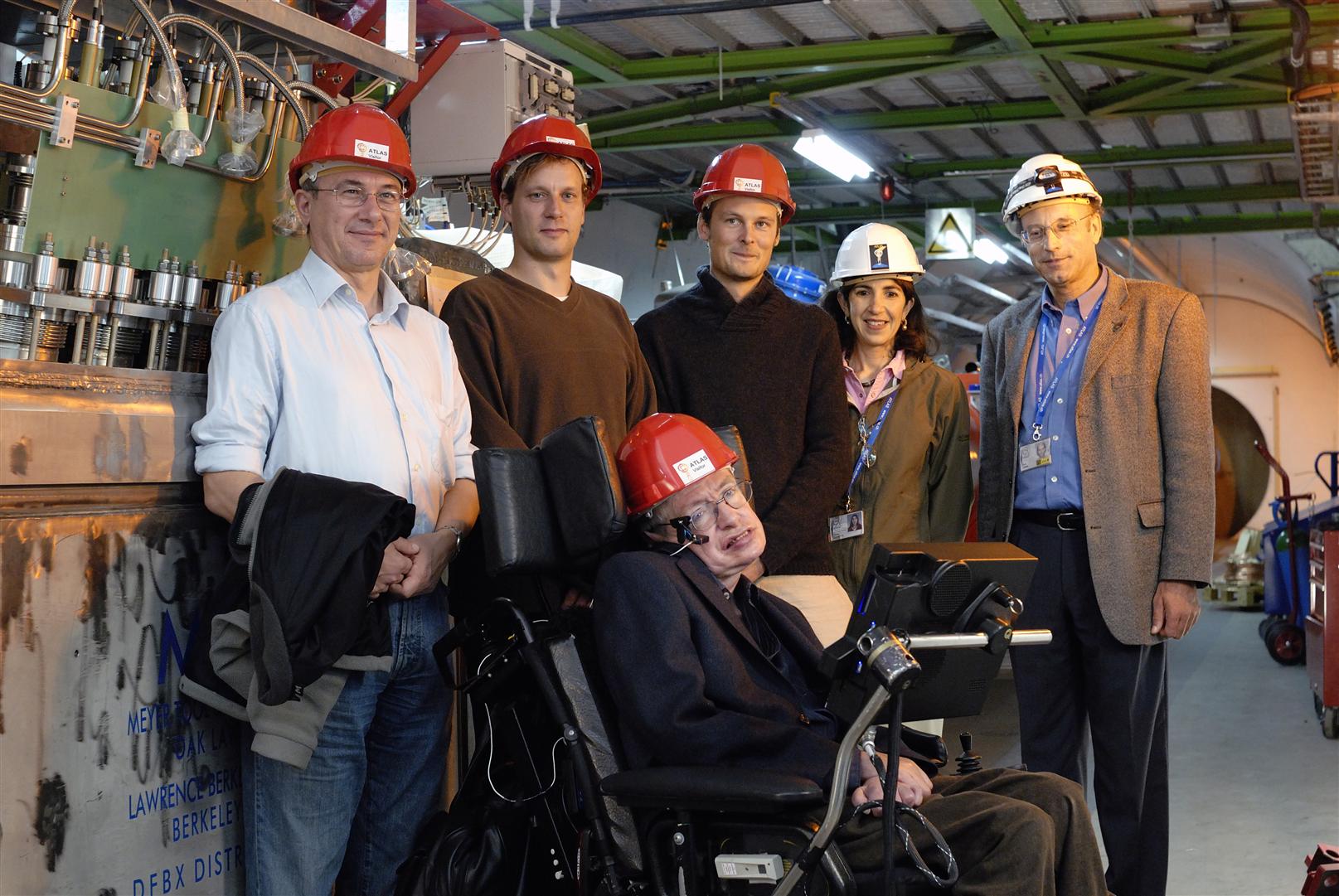 On Tuesday 26 September 2006 the ATLAS Collaboration was honoured by a very special visit to the detector in the underground cavern by Professor Stephen Hawking, the famous cosmologist holding the post of Lucasian Professor of Mathematics at Cambridge University (position held by Isaac Newton in the 17th century). 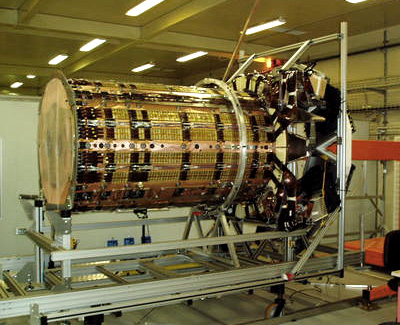 Final components of the semi-conductor tracker (SCT) arrrive at CERN

The first few months of 2006 saw the delivery to CERN of the final components of the ATLAS semi-conductor tracker (SCT), namely the completed SCT end-caps. 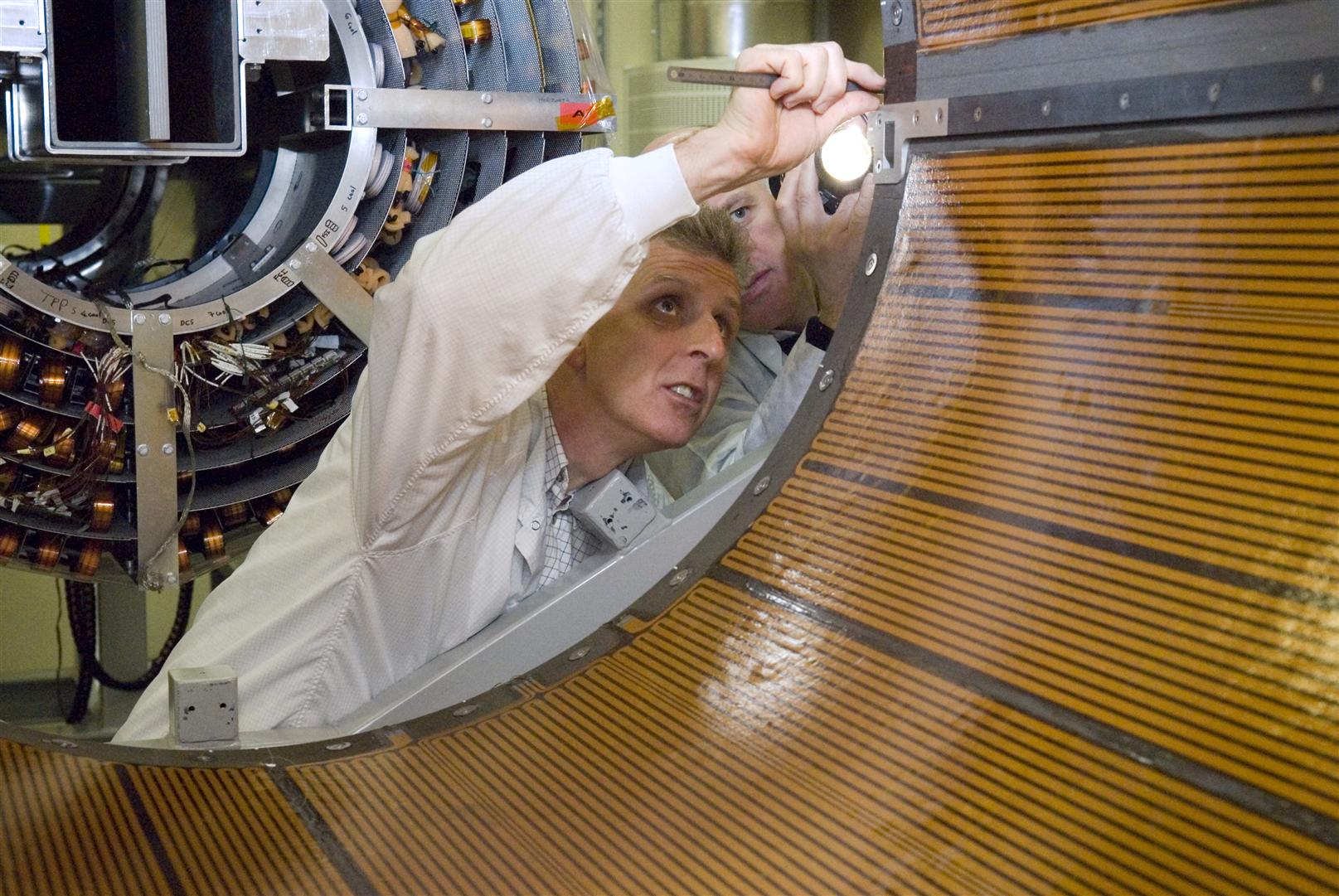 The SCT barrel inserted into the TRT

The SCT barrel was inserted in the TRT on 17 February, just missing Valentine's day. This was a change of emphasis for the two detectors. In the preceeding months there had been a lot of focus on testing their performance. The TRT had been observing cosmic rays through several sectors of the barrel. The two detectors had to be painstakingly aligned to be concentric to within a millimetre.